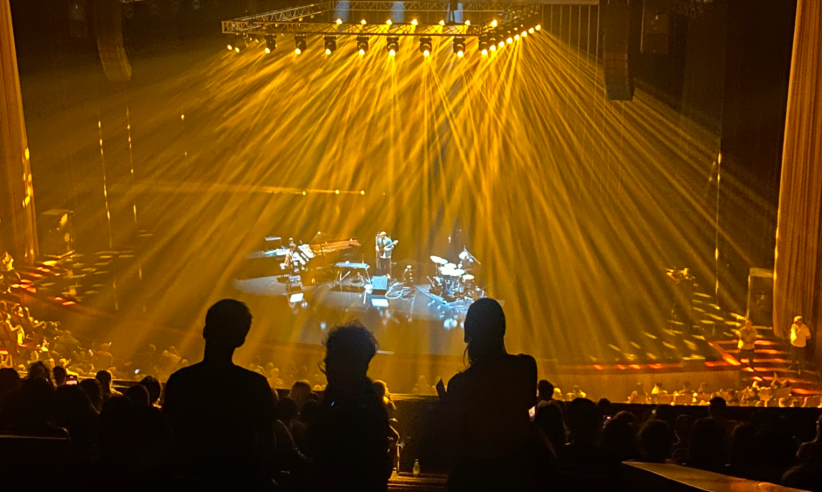 Yerevan is all abuzz about the ongoing Starmus Festival- where some great stars have come out to teach and celebrate space, science, and music. Monday night’s official opening was one part awards ceremony, one part science lecture, and one part unbelievable concert featuring multiple musical legends. This round-up catches you up on Starmus VI so far…

Since the first Starmus Festival took place in 2011, the event has repeated every couple years in locations around Europe. Its founder, astronomer Dr. Garik Israelian, dreamed of holding the event in Armenia as a way to inspire its youth to engage in science, research, and technology, and to be a catalyst for positive developments.

Starmus has an international following, some of whom have come to Armenia to be a part of it. This year’s Starmus is notable for being the biggest in its history. One visitor who traveled from Ireland to experience the Festival estimated the Sunday night opening event had four times the attendees as the previous Starmus, which took place in Switzerland.

One of the biggest names at Starmus is Dr. Brian May, who has the unique distinction of both being an astrophysicist and the guitarist of one of the world’s most popular rock bands, Queen. This makes him the perfect embodiment of the spirit of Starmus. He was awarded one of the night’s Stephen Hawking Medals for Science Communication.

An interesting coincidence noted during the event was that it just so happened to also be the birthday of his bandmate, the late Freddie Mercury.

Another awardee, primatologist Dr. Jane Goodall, who brought a love of monkeys and apes to the global public, made her acceptance speech by video, saying that while she couldn’t be in Armenia, she very much hopes to be there one day to meet with young students.

It was also a big night for keyboardist Derek Sherinian, who had the opportunity to play at the concert in his homeland with his supergroup Sons of Apollo. His bandmates made multiple references to Derek’s Armenian heritage during the set and how glad they were to be in Armenia with him.

One of those bandmates is Mike Portnoy, best known as co-founder of the progressive rock band Dream Theater, who shared his reflections on his brief trip to Armenia. Here’s a glimpse of their performance:

Could there possibly even be a festival celebrating music in Armenia without having Serj Tankian there? Besides the mind-blowing performance of his song “Empty Walls” which can be seen above, he also sang his new song “Amber” with folk singer Sevak Amroyan, as can be seen here. The ethereal song carries a deep sense of loss and sadness as a result of the 2020 Karabakh War, and yet also contains a feeling of hope and renewal.

As if all that wasn’t enough, yet another memorable performance was that of David Bowie’s Space Oddity… sung by an actual astronaut, Commander Chris Hadfield, whose rendition of it recorded on the International Space Station now stands at over 50 million views. He was accompanied on piano by keyboard legend Rick Wakeman of the prog rock band Yes, who also performed songs such as a Beatles medley with the Armenian National Philharmonic Orchestra.

Starmus Day 2 included lectures by Nobel laureates, noted scientists, and co-inventor of the iPhone Tony Faddell. A very unexpected headline was made by one of the speakers, co-developer of the CRISPR genome editing technique Emmanuelle Charpentier… who “came out” as being of Armenian descent. This fact doesn’t appear to have been previously known, and her father only learned at age 60 when renewing his ID that he had been given his mother’s maiden name of Charpentier, and his father was an Armenian who escaped to France during the genocide. As she announced at Starmus: “so, my name should not have been Charpentier. It should have been an Armenian name… Sinanian.” The recipient of the 2020 Nobel Prize in Chemistry for her co-development of the CRISPR genome editing technique, this technology has incredible potential across numerous fields. Does this mean Dr. Ardem Patapoutian is not in fact the first Armenian to win the Nobel Prize, as was widely announced with great pride last year? Now Armenians can point to a winner two years in a row, certainly a remarkable feat sure to inspire the Armenian youth just as Starmus intended.

For those of you keeping track. The key word here being “yet”.