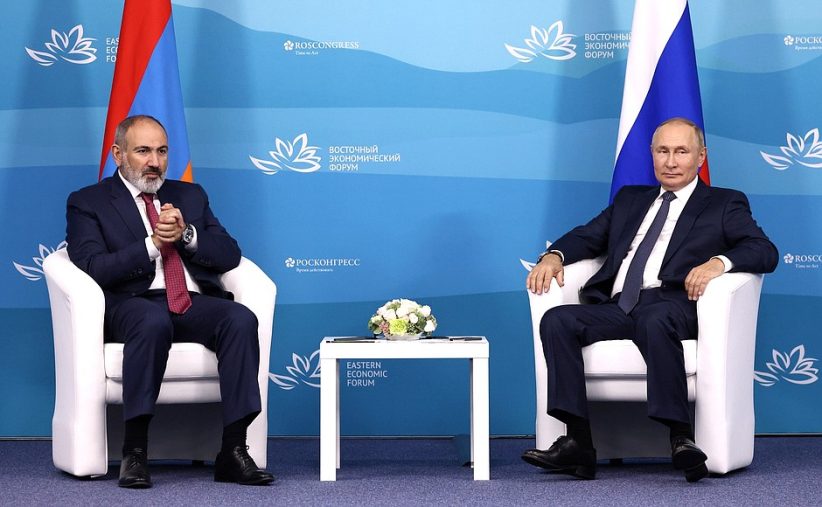 Armenian Prime Minister Nikol Pashinyan dismissed fears other countries could impose secondary sanctions on Armenia as a result of its close trade and investment ties with Russia in an address Wednesday in the Russian city of Vladivostok, saying that “being afraid is not a very useful position.”

“We need to work to manage the threats that appear and try not only to take note of opportunities that are opening, but also work to create new opportunities,” he said. “Thanks to decisions taken by the Russian president and government, we were able to manage these threats together. It would be very difficult for Armenia to manage alone.”

Pashinyan was in the far eastern Russian city for this year’s Eastern Economic Forum, an annual gathering of regional leaders organized by the Kremlin. Attendees also included Russian President Vladimir Putin and high-level officials from China, Mongolia, and Myanmar.

Throughout his address, Pashinyan stressed the importance of maintaining Armenia’s “strategic” relations with Russia while warning about further “destabilization” in the South Caucasus.

“Of course, our relations with Russia were, remain, and must be strategic and allied, and we hope that this factor will be key for stability and peace in our region,” he said.

At the same time, Pashinyan expressed concern that international attention on Ukraine is coming at the expense of the South Caucasus, warning that “this could lead to the destabilization of the situation in our region.”

“This is related to the current situation, when the attention of the entire international community…and especially of Russia, Armenia’s strategic partner, is very focused on the situation around Ukraine in the sphere of security,” he stressed.

Pashinyan added that rhetoric in foreign capitals aiming to portray Armenia as either pro-Russian or pro-Western is also harming Armenia’s security.

“There are forces that spend a lot of energy to present Armenia in Moscow as a country with a pro-Western government, and to present it in Europe and the West as a strongly pro-Russian country,” he said. “Add this as a factor for justifying destabilization in the region.”

Pashinyan also touched on Armenia’s ongoing efforts to normalize relations with Azerbaijan and Turkey, stressing he expects Russia to play a major role in the negotiations.

He added that “there is good progress in the work of the tripartite commission,” referring to a working group of Armenian, Azerbaijani, and Russian officials aimed at opening transport routes in the South Caucasus. “We are very interested in this, and we hope to resolve (the remaining) issues in the near future with Russia’s support.”

Likewise, he stressed that “we hope to establish relations with Turkey with Russia’s support.”

In addition, Pashinyan announced that Armenia is aiming for a minimum of 7% economic growth this year, attributing those “very good dynamics” to the country’s membership in the Russia-led Eurasian Economic Union.

“The economic growth that is now taking shape in Armenia is related to the freedoms that the union provides. I mean the free movement of goods, capital, and labor,” he said, adding that Armenia’s economy is not facing “a crisis situation thanks to Russia’s support.”

During his visit to Vladivostok, Pashinyan also held a one-on-one meeting with Putin to discuss the state of Armenia-Russia relations and the Karabakh conflict, according to a Kremlin read-out of the talks.

AND IN OTHER NEWS: Starmus In Yerevan