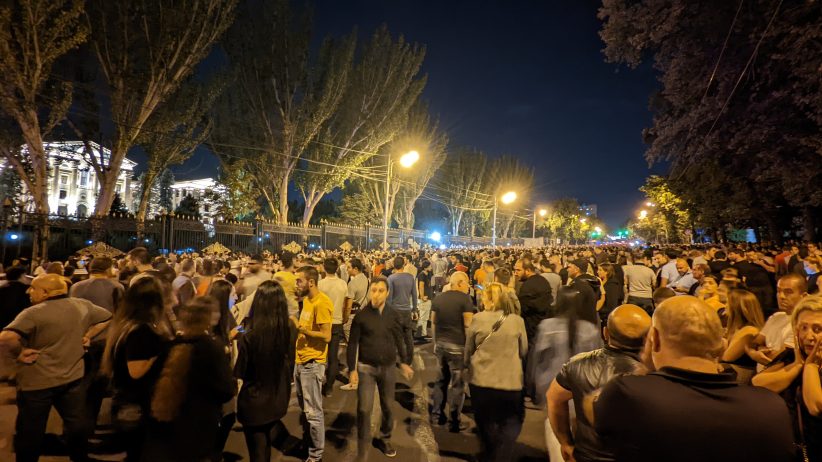 Yerevan erupted in protest Wednesday evening, with thousands taking to the streets to demand Armenian Prime Minister Nikol Pashinyan’s resignation after he made contradictory comments earlier in the day about his readiness to sign a peace agreement with Azerbaijan.

Thousands gathered in central Yerevan, including in front of Armenia’s parliament building, where Pashinyan made his initial remarks, chanting anti-Pashinyan slogans, including “Nikol is a traitor” and “Armenia without Nikol.”

A number of opposition politicians gave speeches to the crowd, including Karin Tonoyan and Gegham Nazaryan, each of whom lost a son in the 2020 Karabakh (Artsakh) war.

Arman Tatoyan, who previously served as Armenia’s Human Rights Defender and largely remains a popular figure, wrote on Facebook he would head to Baghramyan Avenue, where the parliament building is located, to join the crowd.

CivilNet reporters at the demonstration said it appeared larger than protests held in Yerevan immediately after Pashinyan signed a ceasefire agreement to end the 2020 Karabakh war nearly two years ago.

It seemed to be more or less spontaneous, in contrast to smaller rallies organized earlier this year by Armenia’s political opposition.

As of 1 a.m. local time, the demonstration remained ongoing. There have been no reports of violence at the rally, and the police have not detained any protesters.

Pashinyan then clarified in a Facebook post that “no document has been signed or is going to be signed.”

Armenia’s National Security Service also released a statement to that effect, while Karabakh President Arayik Harutyunyan wrote on Facebook that “there is not even a draft of any such document.”

Also read: Pashinyan says ready to reach agreement with Azerbaijan, but stresses nothing ‘has been signed’

Pashinyan says ready to reach agreement with Azerbaijan, but stresses nothing ‘has been signed’