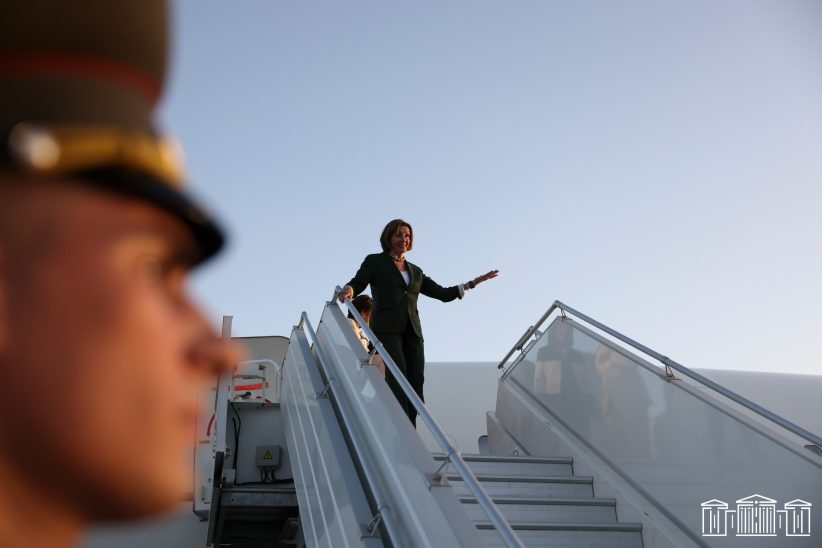 “Azerbaijan announced the completion of the military operation,” Turkish President Recep Tayyip Erdoğan told reporters Saturday after meeting with Azerbaijani President Ilham Aliyev on the sidelines of a regional summit in Uzbekistan.

Also in attendance at the summit was Iranian President Ebrahim Raisi, who reiterated to Aliyev in one-on-one talks that Iran continued to “oppose any change of international borders” in the South Caucasus.

Meanwhile, U.S. House Speaker Nancy Pelosi arrived in Armenia Saturday alongside a small congressional delegation “to highlight the strong commitment of the United States to security, economic prosperity, and democratic governance in Armenia and the Caucasus region,” Pelosi’s office said. She is the highest-ranking U.S. official ever to visit Armenia.

Pelosi is set to meet with a number of senior officials, including Armenian Prime Minister Nikol Pashinyan, and visit the Armenian Genocide memorial at Tsitsernakaberd, the U.S. embassy in Yerevan said.

Pelosi’s visit comes as Armenian Parliament Speaker Alen Simonyan said in an interview with public television Thursday that the United States played a key role in brokering the ceasefire that went into effect Wednesday evening.

At the same time, “I don’t want to imply that (U.S. assistance) supersedes the interventions of France and Russia,” he stressed.

As Armenia continues to reel from Azerbaijan’s attack shortly after midnight Tuesday, U.S. and French representatives, among others, have called out Azerbaijan for its role in this week’s clashes more forcefully than during past rounds of fighting.

In sharp contrast, Russia has issued more balanced and measured statements in response to the hostilities, while the Collective Security Treaty Organization, a Russian-led military alliance, has declined to dispatch troops to Armenia.

Armenian citizens demanding Armenia withdraw from the CSTO gathered to protest in central Yerevan Saturday, saying the alliance is not living up to its commitments to Armenia.

The day before, a smaller number of people attempted to gather in front of the Russian embassy in Yerevan to protest “against Russia’s indifference and neutrality,” but police immediately detained them.

France, Russia, and the United States are the co-chairs of the Minsk Group, a body that has led efforts to mediate a peaceful resolution to the conflict between Armenia and Azerbaijan for many years, largely without result.

For its part, the European Union has sought a greater mediating role in the region in recent months, as international tensions over Russia’s invasion of Ukraine earlier this year have thrown the Minsk Group’s future in serious doubt.

A spokesperson for Armenia’s representation to the European Court of Human Rights said Saturday that “more than 10” Armenian soldiers were captured in this week’s clashes and are being held by Azerbaijan as prisoners of war.

Armenia has also formally appealed to the International Court of Justice over alleged war crimes committed by Azerbaijan, the spokesperson said.

Azerbaijan raised its combat losses to 79 on Saturday, adding that another 282 Azerbaijani soldiers were wounded.

Those figures make this week the bloodiest in the region since the outbreak of war in and around Karabakh (Artsakh) nearly two years ago.

AND IN OTHER NEWS: Hints of War