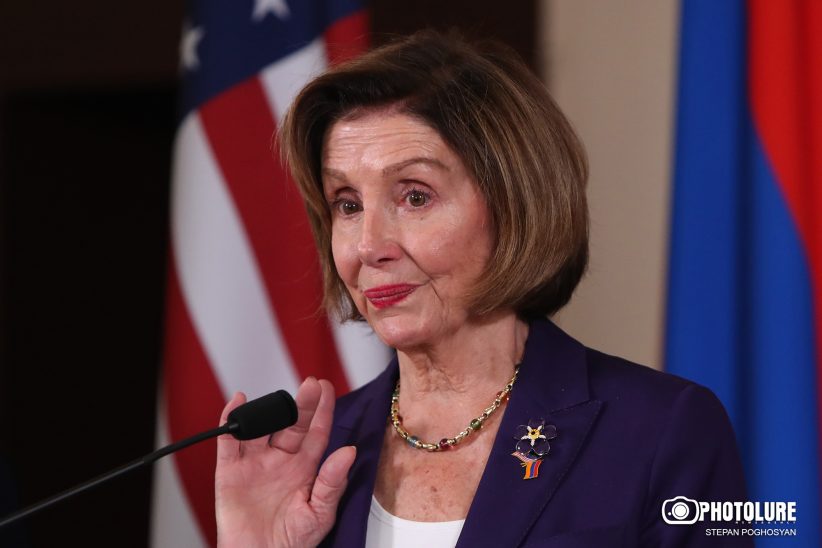 U.S. House Speaker Nancy Pelosi discussed “a wide range of issues related to the Armenian-American partnership (and) the further development of cooperation in various areas” at meetings on Sunday with a number of senior Armenian officials, according to an Armenian government read-out.

Pelosi was in Armenia alongside a small congressional delegation “to highlight the strong commitment of the United States to security, economic prosperity, and democratic governance in Armenia and the Caucasus region,” her office said. She is the highest-ranking U.S. official ever to visit Armenia.

During talks with Armenian Prime Minister Nikol Pashinyan, Pelosi “assured that the American side will continue to actively contribute to the further expansion of bilateral, multi-sectoral cooperation and programs aimed at the development of democracy in Armenia,” the Armenian government said.

At a press conference earlier in the day with her Armenian counterpart, Alen Simonyan, Pelosi pledged further support for “advancing security, economic development, and democratic institutions in Armenia and in the region.”

That may include “anything we can (do) to be more supportive” with regard to security, providing Armenia with aid from the Millennium Challenge Corporation, funding regional demining efforts, and backing further democratic reforms, according to Pelosi and members of the congressional delegation.

Meanwhile, large crowds gathered in central Yerevan to welcome Pelosi and the congressional delegation, call for greater support for Armenia from the international community, and protest against Azerbaijan’s attack last week on Armenia.

During her visit to Armenia, Pelosi also said that the United States “strongly condemns” the “illegal and deadly attacks by Azerbaijan on Armenian territory” and the “assault on the sovereignty (and) border of Armenia.”

“We, our delegation, have been very outspoken in saying that this was initiated by the Azeris and that there has to be recognition of that,” she told reporters.

Pelosi’s comments were some of the strongest and most direct to come from a U.S. official with regard to the Armenia-Azerbaijan conflict in many years, attracting widespread attention in Armenia and in Armenian diaspora communities around the world.

Azerbaijan reacted with indignation to Pelosi’s comments, with Leyla Abdullayeva, a spokesperson for Azerbaijani Foreign Ministry, calling the remarks “deeply regrettable” and “unacceptable.”

“Such statements serve not to strengthen fragile peace in the region, but rather to escalate tension,” Abdullayeva wrote on Twitter.

Why is Nancy Pelosi in Armenia?