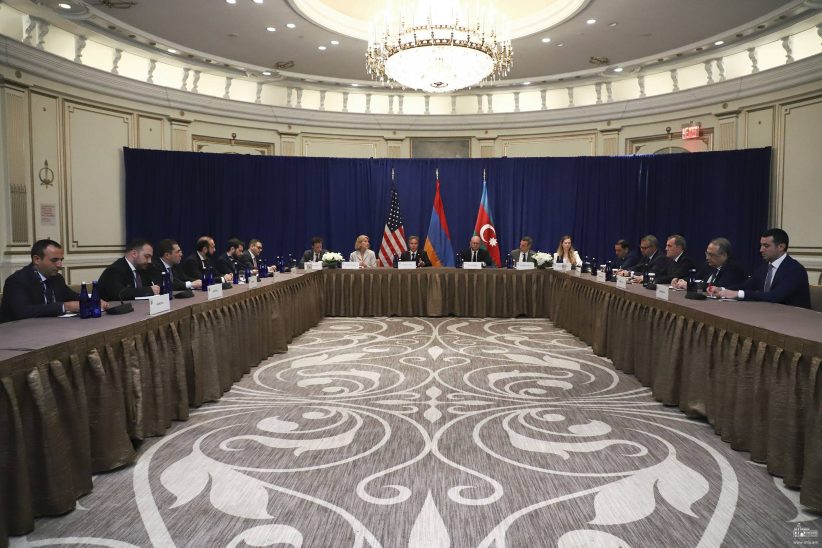 Armenian Foreign Minister Ararat Mirzoyan called on Azerbaijan to withdraw from Armenian territory at a meeting Monday with his Azerbaijani counterpart, Jeyhun Bayramov, on the sidelines of this year’s United Nations General Assembly in New York City.

Azerbaijan remains in control of about 50 square kilometers of territory within Armenia proper after launching major attacks last Tuesday that left almost 300 people dead or missing and nearly 600 injured, including civilians, according to official figures.

That makes last week the bloodiest in the region since the outbreak of the war in and around Karabakh two years ago, while Azerbaijan’s shelling of three dozen communities in eastern and southern Armenia marked an unprecedented escalation in hostilities.

At the meeting, brokered and mediated by U.S. Secretary of State Antony Blinken, Mirzoyan also stressed that “the use of force or the threat of force is unacceptable, and international mechanisms must be introduced to prevent further escalations,” Armenia’s Foreign Ministry said in a statement.

“Mirzoyan reiterated the readiness of the Armenian side to be involved in the process of comprehensive normalization of relations,” the ministry added.

In its own read-out of the talks, Azerbaijan’s Foreign Ministry repeated unsubstantiated claims that “Armenia caused clashes by carrying out provocations and attacks against Azerbaijan,” adding that “Armenia obstructs the (normalization) processes and grossly violates its obligations.”

At the meeting, “Bayramov once again emphasized his readiness for urgent negotiations…to ensure lasting peace,” the ministry said.

The State Department also put out a statement, saying Blinken “emphasized the need to prevent further hostilities” and “encouraged the sides to meet again before the end of the month.”

Blinken’s move to organize Monday’s meeting between Mirzoyan and Bayramov — the first direct talks between Armenian and Azerbaijani officials since last week’s clashes — came as U.S. House Speaker Nancy Pelosi wrapped up a historic trip to Armenia, where she met with senior officials.

Pelosi, the highest-ranking U.S. official ever to travel to Armenia, said during her visit that the United States “strongly condemns” the “illegal and deadly attacks by Azerbaijan on Armenian territory” and the “assault on the sovereignty (and) border of Armenia.”

“We, our delegation, have been very outspoken in saying that this was initiated by the Azeris and that there has to be recognition of that,” she added.

Pelosi’s comments were some of the strongest and most direct to come from a U.S. official, let alone from a figure as high-ranking as Pelosi, with regard to the Armenia-Azerbaijan conflict in many years, garnering praise in Yerevan and prompting indignation in Baku.

Meanwhile, Mirzoyan met with a number of his other counterparts at the UN Monday, including foreign ministers from Belgium, Cyprus, Greece, and Poland.

After talks, Mirzoyan and his Cypriot and Greek counterparts released a joint statement regarding “Azerbaijani aggression against Armenia” and “the escalation of the hostile rhetoric of Turkey against Greece” and pledged to deepen cooperation among their three countries.

The UN Security Council discussed last week’s fighting between Armenia and Azerbaijan at a special session last week, where a senior UN official expressed “hope (that) the ceasefire will hold.”

Protests in Karabakh as president warns of new impending war