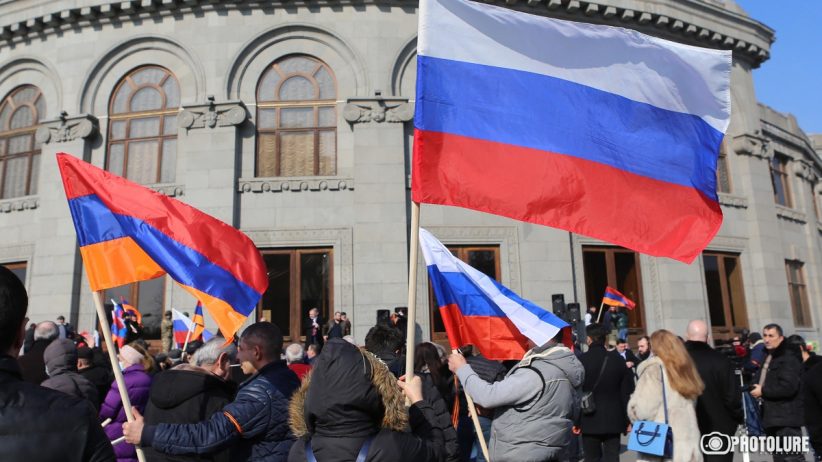 Members of 'Strong Armenia with Russia - for the sake of a new union' movement hold a protest march in the streets of Yerevan, Armenia

Pro-Russian sentiment has been steadily declining in Armenia over the last decade, even before Azerbaijan’s attack on Armenia last week, which prompted Armenian citizens over the weekend to hold a small, but rare, protest demanding Armenia withdraw from a Russian-led military alliance, saying it is not living up to its commitments to Armenia.

That is according to data from the Caucasus Barometer, an annual household survey conducted by the Caucasus Research Resource Centers, a well-regarded regional think tank network.

The polls show a dramatic drop in support among Armenians for Russia over the last ten years or so, with just 35% of respondents saying Russia is “the main friend of Armenia” in 2021. That represents a decline of 22 points since 2019 and 48 points since 2013, when more than four in five Armenians considered Russia to be Armenia’s closest friend.

In contrast, the survey shows swelling support in Armenia for France, which has risen 24 points since 2019, narrowly becoming the most popular answer to the “main friend” question in 2021, at 36%. This is even more striking when considering that France spent a good part of the 2010s with just single-digit levels of support in the polls.

In the 2021 survey, no other country came close to France or Russia, and the next highest answer to the “main friend” question, at 18%, was “none.”

Read more (from June): New poll suggests uncertainty in Armenia about country’s place in the world

The alliance also declined to respond to an incursion last May by Azerbaijan into parts of Armenia proper, inaction Armenian Prime Minister Nikol Pashinyan has contrasted with its decisive response to mass civil unrest that shook Kazakhstan, another CSTO member, in January.

In addition, Pashinyan has raised the issue of arms sales by other CSTO members to Azerbaijan, even while being careful to temper his criticism of the alliance with praise, stressing at a summit in May that Armenia remains “committed to the organization’s further development.”

“Armenia is our close friend and strategic ally…Russia and Armenia maintain an intensive political dialogue,” he said.

Protests in Karabakh as president warns of new impending war