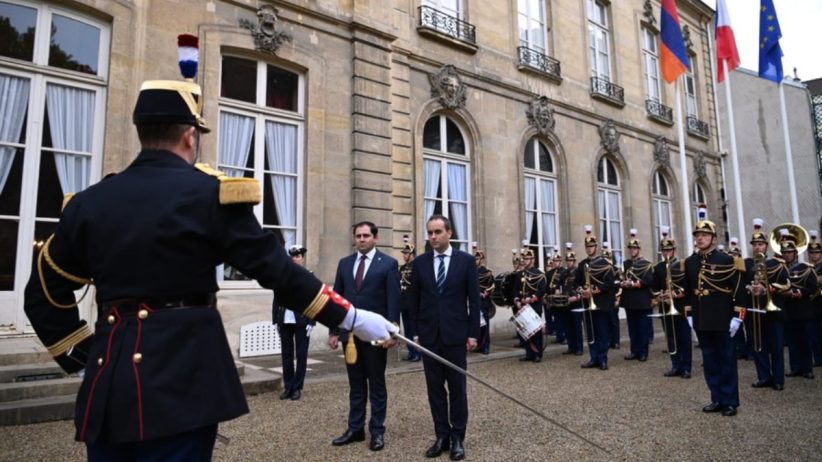 France said Wednesday it would send a military delegation to Armenia “to assess the situation,” as the United States brokered a meeting between two senior officials from Yerevan and Baku, in the latest sign of deepening French and U.S. involvement in the South Caucasus.

French Defense Minister Sébastien Lecornu announced the move after meeting with his Armenian counterpart, Suren Papikyan. “Hostilities must cease, and Azerbaijani forces must return to their initial positions,” Lecornu wrote on Twitter.

Macron reiterated “his call to return to respect for the ceasefire and to maintain forces in their initial positions” in his call with Aliyev, according to a French government read-out. “He also recalled his demand for respect for Armenia’s territorial integrity.”

Macron said the same at a press conference alongside Pashinyan earlier in the day, adding that “the fact that the border is not demarcated cannot justify any advance into the territory of another country.”

Describing the meeting as “direct and constructive,” Sullivan wrote on Twitter that the officials “discussed the importance of avoiding further violence and pursuing time-bound and focused negotiations” and “identified concrete steps forward in support of a stable and lasting peace.”

No other details were made immediately available.

Azerbaijan’s unprecedented assault on Armenia proper earlier this month appears to be prompting increased diplomatic engagement in the region by Western countries, particularly France and the United States, as well as unusually strong language rebuking Azerbaijan.

Senior officials in Paris and Washington have publicly called out Baku for launching the attack and repeatedly urged a full withdrawal of Azerbaijani forces from Armenia, which remain in control of about 50 square kilometers of Armenian territory.

U.S. officials played a key role in brokering the ceasefire that came into effect two weeks ago, senior Armenian officials have suggested.

That all contrasts sharply with the reaction from Russia, the region’s traditional security guarantor, which appears to remain largely preoccupied by its war against Ukraine.

In response to the flare-up in hostilities between Yerevan and Baku, Moscow has issued a number of balanced and measured statements, while the Collective Security Treaty Organization, a Russian-led military alliance, pointedly declined to send military assistance to Armenia.

Can Armenia make do without Russia? A conversation with Ron Suny