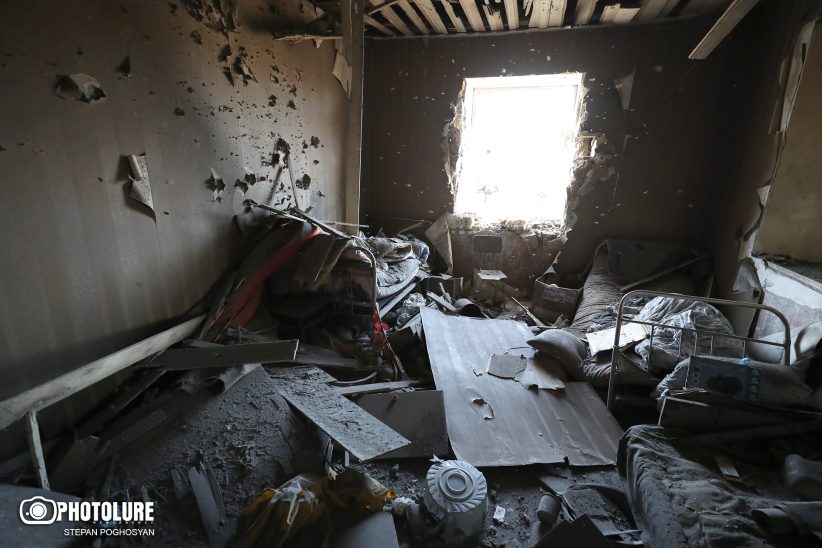 Sotk village after the Azerbaijani shelling in Gegharkunik Province of Armenia

In speeches at the UN Security Council and the UN General Assembly earlier this month, Azerbaijani diplomats made several false statements, especially with regards to Baku’s attacks on Armenia on September 13 and 14.

In his speech at the Security Council meeting on September 15, Azerbaijani representative Yashar Aliyev claimed Azerbaijan’s response to “Armenia’s provocations” were “limited and targeted as legitimate military objects.”

At the General Assembly speech, Azerbaijan’s top diplomat, foreign minister Jeyhun Bayramov, insisted on the same point. “The armed forces of Azerbaijan demonstrated utmost restraint and professionalism, and limited to targeting exclusively fire points of Armenia with high precision weapons to suppress its attacks on the positions of Azerbaijan,” he claimed from the podium.

Azerbaijan’s attacks on civilian targets within Armenia is well documented. Notably, in the spa town of Jermuk, numerous residential and touristic locations were hit by shells and other military weapons. These include the ropeway, three hotels, a sanatorium, and a cafe. In Sotk, 200 houses and the municipality building were damaged.

Azerbaijani attacks on civilians and civilian infrastructure have been confirmed by foreign governments as well. At the Security Council meeting, the representatives of the U.S., Norway, and France mentioned reports of shelling and strikes on civilians and civilian infrastructure in Armenia. This fact has been mentioned by NATO Deputy Assistant Secretary General Javier Colomina, Canadian Foreign Minister Mélanie Joly and Greek Foreign Minister Nikos Dendias, among others.

Yashar Aliyev, the Azerbaijani diplomat, also claimed that contrary to the “allegations” of Armenia’s representative, Armenia’s Health Ministry had not reported any casualties among civilians.

In reality, civilian casualties were reported by the Health Ministry on September 16. At the time, there were seven civilians known to have been wounded by Azerbaijani attacks. According to the latest data collected by the human rights defender’s office, four civilians were killed in the attacks, while one is missing.

How to honor those we lost in the 44-day war