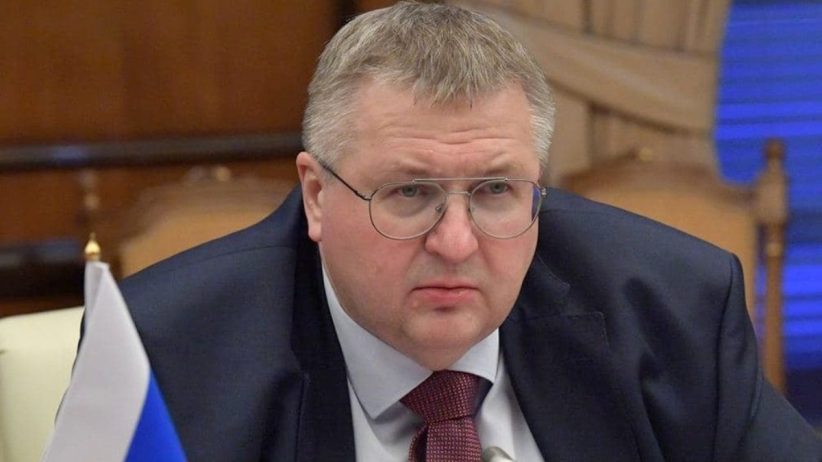 In recent days, Russian officials have ruled out Azerbaijani control of a crucial overland route crossing Armenia, called for the “withdrawal of forces to their initial positions” following Azerbaijan’s attack on Armenia two weeks ago, and accused the West of meddling in the region.

In a lengthy interview with Rossiyskaya Gazeta published Friday, Russian Deputy Prime Minister Alexey Overchuk effectively ruled out Azerbaijani control of a planned overland route to connect mainland Azerbaijan with Nakhichevan via Armenia, saying, “Sovereignty over the road (will be) exercised by the country through whose territory the road passes.”

Baku has repeatedly demanded that the route have the status of a corridor, implying some sort of Azerbaijani control over it, a prospect that Yerevan has consistently rejected as a non-starter.

Overchuk, alongside his Armenian and Azerbaijani counterparts, Mher Grigoryan and Shahin Mustafayev, heads a joint working group on opening regional transit routes. Nothing has come of the group’s work so far.

The November 2020 ceasefire signed by Armenia and Azerbaijan and brokered by Russia calls for “all economic and transport connections in the region (to) be unblocked,” including routes connecting mainland Azerbaijan with Nakhichevan, but it does not say such routes should constitute corridors.

In his interview, Overchuk stressed the potential economic benefits of opening regional transit routes, predicting that open borders will benefit “both Armenia itself and the entire region of the South Caucasus,” and adding that “Russia also needs these roads very much.”

Meanwhile, Sergei Kopyrkin, Russia’s ambassador to Armenia, told journalists on a visit Thursday to regions of Armenia heavily shelled in Azerbaijan’s assault two weeks ago that “the withdrawal of troops to their initial positions can be the only reliable basis for solving” the conflict between Armenia and Azerbaijan.

While not as direct as recent remarks by French and U.S. officials, among others, who have explicitly called for Azerbaijan to withdraw its forces from Armenia, Kopyrkin’s comment was still a notable departure from the language of other Russian officials, who have merely urged “de-escalation” and “restraint.”

Armenia’s Foreign Ministry has publicly called on “the international community to put pressure on the military and political leadership of Azerbaijan” to withdraw troops from Armenia.

At the same time, Russian Foreign Minister spokesperson Maria Zakharova accused Western powers of meddling in the South Caucasus, saying at a press briefing Thursday that, “We see attempts by a number of non-regional players to transfer or bring instability to the region.”

“We see that there is a whole range of non-regional players who would like to appropriate the laurels of a peaceful settlement or the implementation of peace agreements,” she continued. “This is already serious.”

Azerbaijan’s attack on Armenia two weeks ago appears to be prompting deepening diplomatic engagement in the South Caucasus by Western countries, particularly France and the United States, while Russia, the region’s traditional security guarantor, seems preoccupied by its war against Ukraine.

U.S. State Department spokesperson Ned Price stressed at a press briefing Wednesday that, “We are engaging at multiple levels, through multiple channels, to reinforce the need to de-escalate and to disengage.”

The CSTO and Azerbaijan’s recent aggression against Armenia