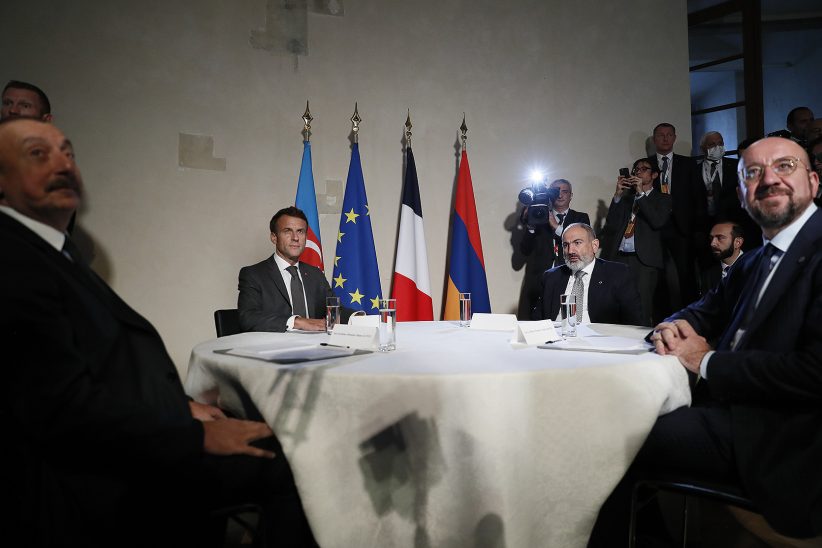 It was the first meeting between Pashinyan and Aliyev since Azerbaijan launched an unprecedented attack on Armenia last month that left nearly 300 people dead and almost 600 people injured, including civilians, according to official figures from both sides. It was the bloodiest outbreak of hostilities in the region since the war in and around Karabakh two years ago․

According to a joint statement released after Thursday’s talks in Prague, “Armenia and Azerbaijan confirmed their commitment to…recognize each other’s territorial integrity and sovereignty,” noting that such an agreement will “serve as the basis for the work” of the two countries’ border delimitation commission.

In May, Armenia and Azerbaijan formed a joint working group to delimit their border — that is, to come to a legal agreement on where exactly the border lies — but nothing has come of the commission’s work so far.

The border group will convene for another round of talks in Brussels by the end of the month, the two sides announced Thursday.

In addition, Armenia agreed in Prague to “facilitate the establishment of a European Union civilian mission alongside the border with Azerbaijan,” which is also meant to help border delimitation efforts.

At a question and answer session earlier this week, the EU’s foreign policy chief, Josep Borrell, said Azerbaijan had previously rejected an offer from the EU to dispatch a border mission to the region.

“We have suggested that there be an EU mediation mission that we deploy to the border. Armenia agrees, Azerbaijan doesn’t. What more do you want us to do,” Borrell said.

Mentions of a separate working group formed by Armenia, Azerbaijan, and Russia to open regional transit routes were notably absent in Thursday’s joint statement. The next day, Pashinyan said that “Azerbaijan again did not respond positively” to negotiations on that front.

“I reiterate, Armenia is ready for unblocking of all regional communications with full respect of our sovereignty and legislation,” Pashinyan said in a rebuke of Aliyev’s long-standing demand that an overland route from mainland Azerbaijan to Nakhichevan via Armenia have the status of a corridor, implying Azerbaijani control.

It was also striking that the readout of Thursday’s talks made no mention of resolving the Karabakh conflict, which lies at the heart of the many disputes between Armenia and Azerbaijan.

Speaking to reporters in Prague before the talks, Aliyev said, “Armenians living in Karabakh are our citizens and we are not going to discuss their fate and future life with any country, including Armenia. This is our internal matter, and Armenians will enjoy the same rights as other citizens of Azerbaijan.”

Armenians in Karabakh who do not wish to become Azerbaijani citizens “can choose another place of residence for themselves,” Aliyev added.

Pashinyan also held one-on-one talks in Prague Thursday with Turkish President Recep Tayyip Erdoğan, marking their first face-to-face meeting and the first meeting of Armenian and Turkish leaders in over a decade.

In a statement, Pashinyan said he and Erdoğan “discussed the process of normalizing Armenia-Turkey relations and possible further steps in that direction,” stressing the “need for urgent implementation” of a breakthrough agreement reached earlier this year to partially reopen their two countries’ border.

After talks in Vienna in July, Armenian and Turkish special representatives agreed to open the two countries’ border to citizens of third countries “at the earliest date possible.”

In a phone call about a week later, Pashinyan and Erdoğan “expressed their expectations” that the agreement would “be implemented soon,” but three months on, the Armenia-Turkey border remains closed.

EU to send mission to Armenia-Azerbaijan border after Prague summit