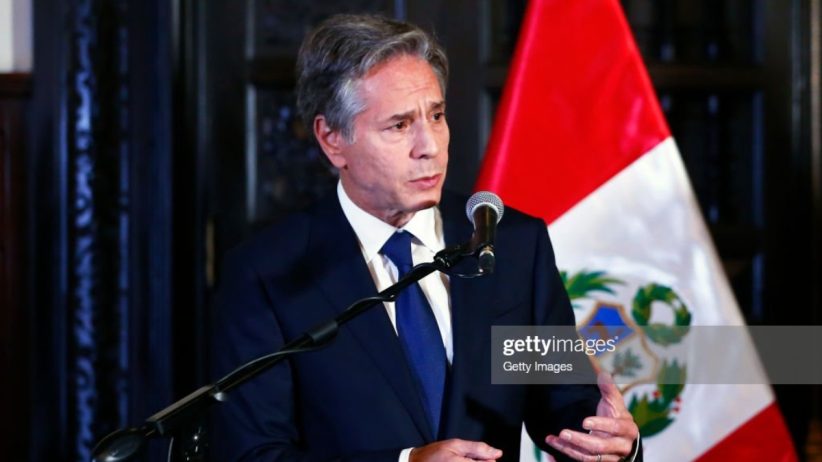 U.S. Secretary of State Antony Blinken “expressed appreciation for the positive steps Armenia and Azerbaijan are taking towards reaching a sustainable peace agreement, including direct talks” in separate phone calls Monday with the two countries’ leaders.

Blinken called on both Armenian Prime Minister Nikol Pashinyan and Azerbaijani President Ilham Aliyev to “continue time-bound and measurable steps to support the peace process” and “underscored the importance of discussions about the rights and securities for the residents of Nagorno-Karabakh and need for both sides to maintain the cease-fire,” according to State Department readouts.

The State Department’s readouts of the two calls were nearly the same. Blinken telling Pashinyan he “welcomed plans for a civilian EU mission along the border with Azerbaijan” and saying to Aliyev he “welcomed Azerbaijan’s release of 17 POWs to Armenia” were among the few differences.

Particularly striking were the mentions of “time-bound and measurable steps” and “rights and securities for the residents of Nagorno-Karabakh.”

The first echoes language used by U.S. National Security Advisor Jake Sullivan, who called for Yerevan and Baku to continue “pursuing time-bound and focused negotiations” after hosting senior officials from both capitals at the White House late last month. That appears to be new language in Armenia-Azerbaijan talks.

The second echoes language used in recent months by Pashinyan and other high-level Armenian officials, who have made a notable rhetorical shift from calling for Karabakh’s status to be determined to urging that the “rights and security” of Karabakh’s Armenians be protected.

Toivo Klaar, the European Union’s special representative to the South Caucasus, also employed that language in a question-and-answer session at the European Parliament Monday, stressing that “the rights and security of Armenians in Karabakh have to be ensured” so they “feel safe and secure in staying where they live.”

Washington is believed to have played a key role in brokering the fragile ceasefire that ended the fighting, and U.S. officials have since convened a number of meetings between senior Armenian and Azerbaijani officials.

The European Union has also played host to high-level meetings, with Pashinyan and Aliyev meeting face-to-face last week in Prague for their first direct talks since last month’s clashes.

After that meeting, mediated by French President Emmanuel Macron and European Council President Charles Michel, Armenia agreed to “facilitate the establishment of a European Union civilian mission alongside the border with Azerbaijan,” a potentially significant development.

The EU mission — which Klaar noted Monday has yet to be officially approved by the EU’s member states — would arrive in Armenia by the end of the month and stay until the end of the year, according to a joint statement released after the Prague summit.