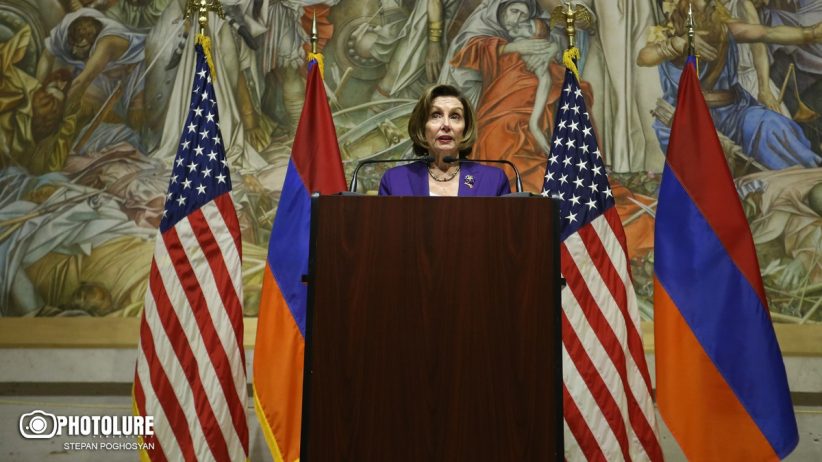 On September 17, U.S. House Speaker Nancy Pelosi arrived in Armenia for a three-day visit. She was the highest-ranking U.S. official to visit Armenia since the country gained independence in 1991. The visit was organized weeks, if not months, in advance of Azerbaijan’s latest aggression against Armenia on September 13, but it took place only a few days after it. The ceasefire was reached late on September 14, but the hostilities still loomed over Pelosi’s visit.

Pelosi met with Armenian Prime Minister Nikol Pashinyan, National Assembly Speaker Alen Simonyan, and Defense Minister Suren Papikyan. She visited the Armenian Genocide memorial at Tsitsernakaberd and held a press conference at the Cafesjian Center in downtown Yerevan. Pelosi accused Azerbaijan of launching illegal and deadly attacks on Armenian territory. She said her delegation strongly condemned those attacks, which threatened prospects for a much-needed peace agreement. Pelosi also criticized Turkey’s role and policy, claiming that Congress had tried to hold Turkey and Azerbaijan responsible for their roles in the Nagorno-Karabakh conflict for decades.

Pelosi’s visit caused a strong reaction in Armenia. Russia’s controversial stance during the 2020 Nagorno-Karabakh war and its limited reaction to Azerbaijan’s attacks against Armenia and Nagorno-Karabakh since have contributed to a significant increase in anti-Russian sentiment in Armenia. As Azerbaijan continues putting pressure on Armenia to sign a peace treaty with no mention of Nagorno-Karabakh and to open the so-called “Zangezur corridor,” many in Armenia are turning their gaze to the United States, hoping that Washington can “save Armenia.”

Around the time of Pelosi’s visit, a growing movement in Armenia called for the country to withdraw from the Collective Security Treaty Organization, a Russian-led military alliance, or at least to freeze Armenia’s membership. On September 17 and 18, pro-Western political parties organized rallies in Yerevan with the U.S. and Ukraine flags, welcoming Pelosi and calling for Armenia to withdraw from the CSTO.

It is necessary to understand the U.S. domestic political aspects of the visit. The United States is bracing for the November 2022 midterm elections, and the stakes are quite high. The Republican Party is slated to win a majority in the House of Representatives, while the Senate may remain evenly divided. Pelosi was accompanied on her trip by Jackie Speier and Anna Eshoo, emocrats who represent California (home to a large Armenian American community), and Frank Pallone, a Democrat from New Jersey. Thus, domestic U.S. politics played a significant role in the visit.

But besides the domestic political motives, the United States also has growing interests in the region. Due to the war in Ukraine, relations with Russia have reached their lowest levels perhaps since the early stages of the Cold war in the 1950s. In the current international security environment, the United States is pursuing a containment strategy to limit Russia’s role in different areas, including the former Soviet space. The 2020 Nagorno-Karabakh war and the deployment of Russian peacekeepers theresidelined the United States and France, Russia’s Minsk Group co-chairs, giving Russia a monopoly on mediation between Armenia and Azerbaijan.

The United States was not satisfied with this and was looking for ways to restore its role. As Russia focused its attention almost entirely on Ukraine, and Azerbaijan pushed forward a strategy of coercive diplomacy to force Armenia to accept all of its demands, the United States saw an opportunity to make a new role for itself in the negotiation process. When Azerbaijan launched its latest attacks against Armenia in mid-September, U.S. Secretary of State Antony Blinken made several phone calls to Pashinyan and Azerbaijani President Ilham Aliyev, seeking to contribute to the establishment of a ceasefire. Then, on September 19, Blinken facilitated a trilateral Armenia-Azerbaijan-United States meeting on the sidelines of the United Nations General Assembly.

Washington’s involvement in the Armenia-Azerbaijan negotiation process reached a new level on September 27, when U.S. National Security Adviser Jake Sullivan hosted a meeting between the Armenian Security Council Secretary Armen Grigoryan and Hikmet Hajiyev, a senior foreign policy advisor to Aliyev, at the White House. Thus, by the end of September, three different platforms for Armenia-Azerbaijan talks had emerged: Russia, the European Union, and the United States.

Washington’s increased involvement, as well as Pashinyan and Papikyan’s recent visits to Paris, have annoyed Russia. The spokesperson for Russia’s Foreign Ministry, Maria Zakharova, said on September 29 that external players were trying to destabilize the South Caucasus. Meanwhile, Azerbaijan launched another provocation along the Armenia-Azerbaijan border on September 28, resulting in three Armenian soldiers’ deaths. Thus, Azerbaijan sent a clear message: As long as Armenia does not accept its demands, including abandoning Nagorno-Karabakh and providing an overland corridor to Nakhichevan, it will continue its tactics of coercive diplomacy and military pressure, regardless of the mediation efforts. Meanwhile, Armenia should be cautious not to transform the Nagorno-Karabakh conflict and Armenia-Azerbaijan relations into another battlefield between Russia and the West. It should avoid creating the perception in Russia that Armenia will fundamentally alter its foreign and security policy and make a U-turn from Russia to the West. And as Azerbaijan continues to rely on its military dominance in the region, it may believe Russia’s resentment against Pashinyan’s government creates a window of opportunity for another large-scale attack against Armenia.

Welcome back to a new season of Mindful Leaders