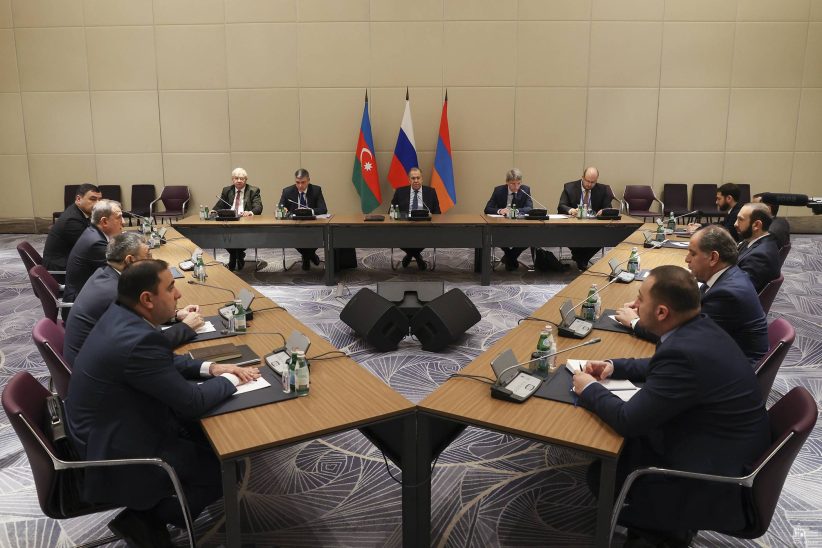 The foreign ministers of Armenia, Azerbaijan, and Russia met for talks Friday in Kazakhstan on the sidelines of a regional summit, reaffirming their commitment to implementing a number of earlier statements issued jointly by the three countries’ leaders.

The high-level talks come as Moscow seems to be seeking to reassert its role in mediating between Yerevan and Baku, amid deepening diplomatic engagement by Western countries, particularly the United States.

For months, Russia, the region’s traditional security guarantor, has appeared preoccupied by its war against Ukraine, and the Collective Security Treaty Organization, Russian-led military alliance, pointedly declined to assist Armenia after last month’s clashes with Azerbaijan, despite treaty obligations.

On Friday, the foreign ministers “reaffirmed our commitment to comprehensive respect for all provisions” in three joint statements since late 2020, Russia’s Foreign Ministry said in a statement.

The first two statements established a ceasefire in and around Karabakh and formed a joint working group to reopen regional transit routes. The third statement reaffirmed the parties’ commitment to the first two.

“A substantive review was carried out regarding the issues of unblocking economic and transport connections in the region through the trilateral working group…(and regarding) the work of the Azerbaijani-Armenian border delimitation commission, with Russia’s consultative assistance,” the readout from Russia’s Foreign Ministry added. “It was agreed to continue trilateral contacts at various levels in the near future.”

In addition to the transit working group, Yerevan and Baku formed a separate commission earlier this year to delimit the Armenia-Azerbaijan border. Unlike the transit group, the border commission is a direct effort between Armenian and Azerbaijani officials, though Russia has repeatedly offered to assist. Little information is publicly available on progress on either front.

Readouts of Friday’s meeting from the foreign ministries in Yerevan and Baku added little other detail.

Armenia’s statement called for “the withdrawal of Azerbaijani troops from the sovereign territory of Armenia, the immediate release of all Armenian prisoners of war, and the unconditional observance of the ceasefire regime,” as well as “the implementation of international mechanisms for monitoring and controlling the border.”

Azerbaijan stressed “the need for Armenia to implement unimplemented provisions in the (joint) statements” and called out “Armenia’s failure to provide landmine maps.”

A busy week of diplomacy in Kazakhstan

On Wednesday, Lavrov met with Mirzoyan one-on-one, announcing the CSTO was ready to dispatch a monitoring mission to the Armenia-Azerbaijan border.

“As soon as you have free time, we will be ready to formally approve this mission, and it can get to work,” Lavrov told Mirzoyan.

In response, Armenian Deputy Foreign Minister Paruyr Hovhannisyan said, “If there is such a proposal, Armenia will not refuse it and is open to any constructive initiative.”

On Tuesday, the European Union formally agreed to send its own civilian mission to the Armenia-Azerbaijan border, prompting Moscow to accuse Brussels of interference and attempting “to oust our country’s mediation efforts.”

Then on Thursday, Azerbaijani President Ilham Aliyev met with Iranian President Ebrahim Raisi in Kazakhstan, where Raisi “made clear that any change in historical borders, regional geopolitics and Iran-Armenia transit routes is not tolerable,” according to a senior aide to Raisi.

“Also any European military presence under any guise is rejected,” the aide added, ostensibly a reference to the EU’s border mission.

Meanwhile, Russian President Vladimir Putin extended an invitation Friday to Armenian Prime Minister Nikol Pashinyan and Aliyev for another round of talks “in Russia, at any time, at any place.”

The week prior, he had said the Kazakhstan summit, which brought together the foreign ministers of a number of post-Soviet countries, was aimed partially at resolving regional tensions.

“After all, besides Ukraine, where truly tragic events are taking place, unfortunately, conflicts also sometimes arise between other neighboring states in the post-Soviet space, and this, undoubtedly, requires the development of measures to resolve them,” Putin said.