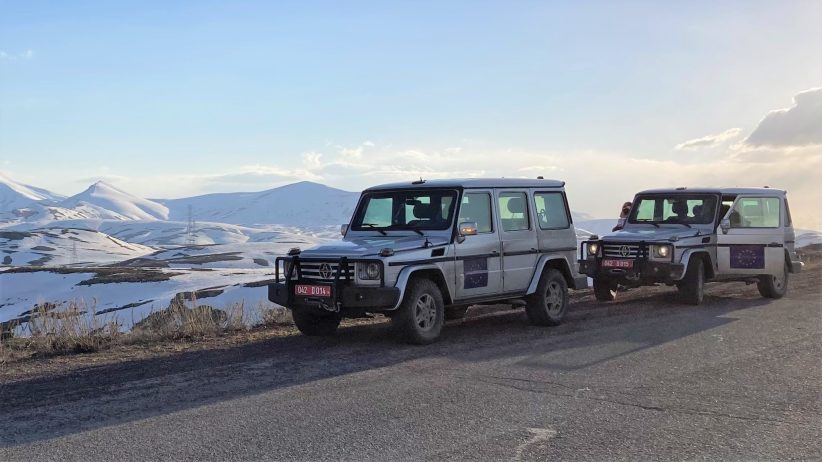 The European Union gave its final approval on Monday to an earlier decision to deploy a civilian monitoring mission to the Armenia side of the border with Azerbaijan, as disagreement between Yerevan and Baku over plans to reopen regional transit links spilled into public view.

In a statement, the European Council said it would temporarily send up to 40 monitoring experts from its mission in neighboring Georgia to the Armenia-Azerbaijan border in a step “aimed at facilitating the restoration of peace and security in the area, the building of confidence and the delimitation of the international border.”

The Armenia-Azerbaijan border mission will last no longer than two months.

An advance team of monitors already arrived in Yerevan late last week to prepare for the mission, according to Toivo Klaar, the EU’s special representative to the region.

On Monday, the advance team met with Armenian Defense Minister Suren Papikyan to discuss the mission’s “main goals and objectives” and “technical and organizational issues,” according to an Armenian government readout.

“There was an agreement by Armenia to facilitate a civilian EU mission alongside the border with Azerbaijan. Azerbaijan agreed to cooperate with this mission as far as it is concerned,” the EU said in its readout of the meeting.

At a question-and-answer session days earlier, the EU’s foreign policy chief, Josep Borrell, said Azerbaijan had previously rejected an offer from the EU to dispatch a border mission to the region. It remains unclear what changed.

Brussels’ decision to deploy a mission to the Armenia-Azerbaijan border has prompted anger in both Moscow and Tehran.

Maria Zakharova, a spokesperson for Russia’s Foreign Ministry, said at a press briefing last week, “We see this as yet another attempt by the EU to interfere by any means in the normalization of relations between Armenia and Azerbaijan, to oust our country’s mediation efforts.”

“Any European military presence under any guise is rejected,” a senior aide to Iranian President Ebrahim Raisi wrote on Twitter a few days later.

Meanwhile, Armenia and Azerbaijan sparred publicly Monday over plans to reopen regional transit links, a stipulation in the Russia-brokered ceasefire that ended the war in and around Karabakh two years ago.

Pashinyan accused Azerbaijan of impeding efforts to reopen the routes, writing on Twitter that the “government of Armenia is waiting for positive reaction from Azerbaijan” to an Armenian proposal to set up three checkpoints along the border.

Armenia’s National Security service submitted a bill to parliament in August that would authorize the Armenian government to set up checkpoints near Karahunj in the southern Syunik region, Sotk in the eastern Gegharkunik region, and Yeraskh close to the border with Nakhichevan.

The bill has not yet been approved by lawmakers.

In response, Azerbaijan’s Foreign Ministry hit back at what it called “3 unrealistic options” and reiterated calls for Armenia to provide a corridor across Syunik to connect mainland Azerbaijan with Nakhichevan.

“Armenia should cease fake pretexts to evade from its commitments under (the November 2020 ceasefire) to link auto/railroads through Zangazur corridor,” the ministry added.

The ceasefire calls for “all economic and transport connections in the region (to) be unblocked,” including routes connecting mainland Azerbaijan with Nakhichevan, but it does not say such routes should constitute corridors.

Yerevan has repeatedly dismissed Baku’s demands for a corridor, which Armenian officials say implies Azerbaijani control over the route.

“Azerbaijan’s constant circulation of the ‘corridor topic’ is nothing but a distortion and sabotage” of the ceasefire, Pashinyan said at a summit of post-Soviet countries in Kazakhstan last week.

Tensions between Yerevan and Baku remain high, just over a month after Azerbaijan launched an unprecedented assault on three dozen municipalities in Armenia proper, marking the bloodiest outbreak of hostilities since the war two years ago.

Each country’s defense ministry continues to accuse the other of ceasefire violations along the border on a near daily basis.