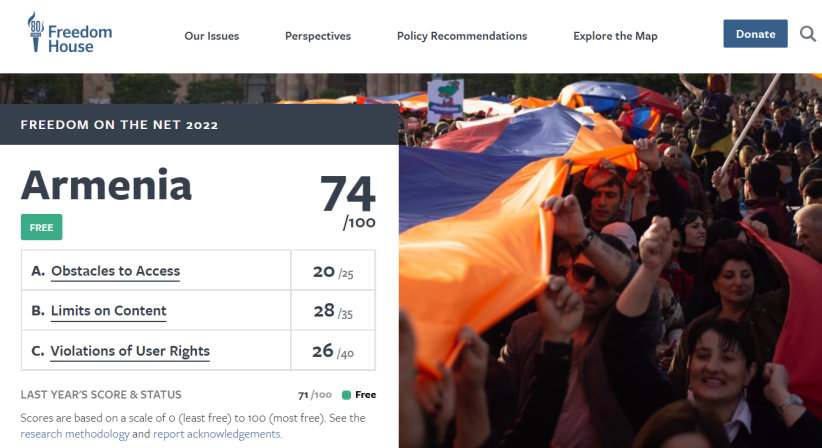 Armenia has improved its internet freedom score, despite the fact that global internet freedom has now declined for 12 straight years, according to Freedom House, which released its yearly Freedom of the Net report on Tuesday.

In its report, the nonprofit also noted accelerating internet fragmentation and increasing attempts by authoritarian countries to export their digital models abroad, warning of “serious consequences for fundamental rights” across the globe.

Armenia, however, appears to be bucking those trends.

Freedom House gave Armenia an overall score of 74 out of 100 points this year, classifying the country as having a “free” internet and marking an improvement of three points since last year. It is the fifth year in a row that Armenia has had a “free” internet, according to Freedom House.

“Internet freedom in Armenia improved during the coverage period (June 2021–May 2022), largely due to the lifting of restrictions on the free flow of information that the government implemented” during the 2020 Karabakh war, this year’s report said.

“Additionally, (Armenian) media outlets faced less significant cyberattacks than they did in the previous coverage period,” it continued, adding that the Armenian government has also scrapped proposed amendments to the criminal code that would have criminalized “grave insults.”

At the same time, Armenia continues to contend with “long-standing problems including systemic corruption, opaque policymaking, a flawed electoral system, and weak rule of law,” as well as “concerns about political interference in the judiciary and hostile rhetoric toward the media from government officials,” Freedom House noted.

Still, this year’s score means Armenia has one of the freest internets in the region, with only neighboring Georgia scoring higher, at 78 points. In contrast, Freedom House gave 38 points to Azerbaijan, 32 points to Turkey, and 16 points to Iran, classifying all countries as “not free.”

Russia, also rated by Freedom House as “not free,” experienced the greatest year-on-year decline in internet freedom of any country in the world, dropping from 30 points last year to 23 this year.

The diaspora must ask itself: What do we want to do for Armenia?