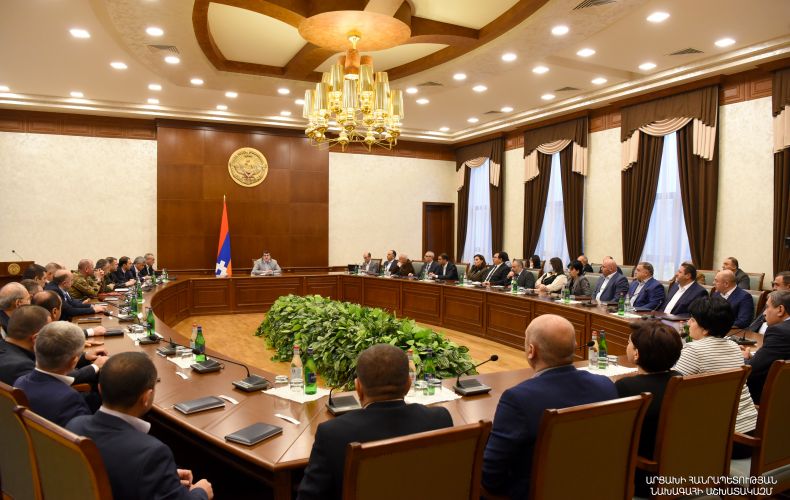 Karabakh President Arayik Harutyunyan convened a special meeting of the region’s parliament on Tuesday after holding talks in Yerevan over the weekend with Armenian Prime Minister Nikol Pashinyan to discuss ongoing negotiation efforts with Azerbaijan.

Harutyunyan “presented the details of the meetings (in Yerevan) and the Artsakh authorities’ approaches to Artsakh’s future,” his office said in a short statement. “He highlighted the importance of coordinated work with Armenia both to overcome internal problems and to face external political challenges.”

Harutyunyan also reiterated his administration’s “goal of achieving international recognition of Artsakh’s independence through the realization of the people of Artsakh’s right to self-determination.”

Days earlier, Harutyunyan met with Pashinyan to discuss “the course of negotiations with Azerbaijan,” according to an Armenian government readout. Pashinyan stressed at those talks that “all information about the negotiations will be provided to our Artsakh partners.”

No other information was made publicly available.

Harutyunyan’s trip to Yerevan came on the heels of two consecutive evenings of protest in Stepanakert, with demonstrators demanding to talk to Harutyunyan about Pashinyan’s negotiations with Azerbaijani President Ilham Aliyev earlier this month in Prague. Harutyunyan did not meet with the protesters.

After lengthy talks in Prague, Pashinyan and Aliyev came to an apparent agreement to recognize the territorial integrity of the other’s country. The two leaders also agreed to allow the European Union to temporarily deploy a civilian monitoring mission to the Armenia side of the border.

There was notably no mention of Karabakh in the joint readout of those talks.

Days earlier, Pashinyan suggested in a primetime interview on Armenian public television that “a peace treaty between Armenia and Azerbaijan may be separated from the Nagorno-Karabakh conflict,” adding, “On the issue of Nagorno-Karabakh, Nagorno-Karabakh should be the main negotiator.”

Those remarks set off widespread consternation in Stepanakert, prompting Karabakh’s Security Council to release a lengthy statement preemptively rejecting any peace treaty between Armenia and Azerbaijan that does not address the Karabakh conflict.

Aliyev himself has all but ruled out negotiating with Pashinyan on the Karabakh issue, telling reporters before the Prague talks that “Armenians living in Karabakh are our citizens, and we are not going to discuss their fate and future life with any country, including Armenia.

“This is our internal matter, and Armenians will enjoy the same rights as other citizens of Azerbaijan,” Aliyev continued, adding that Armenians in Karabakh who do not wish to accept Azerbaijani citizenship “can choose another place of residence for themselves.”

Meanwhile, speculation continues to swirl in Karabakh about the possible appointment of billionaire businessman Ruben Vardanyan as the region’s new state minister, a post similar to prime minister.

Harutyunyan offered Vardanyan the position earlier this month after pledging to make “important personnel and institutional changes,” but Vardanyan has still not publicly accepted or rejected the offer, saying he wants to hold public meetings with Karabakh residents before making a final decision.

“I am very grateful that the president (Harutyunyan) believes that my support and participation in the government will help change the situation. But at the same time, I am sure that this decision must be made by society as well,” Vardanyan told CivilNet over the weekend.

“For me, it is very important not only to be offered a position, but also to understand the situation and society’s readiness for the changes and challenges that we must tackle together,” he continued. “Either we will all join hands and try to save Artsakh — not just so that people can simply survive, but also so that they can live and be confident and feel secure — or we will have whatever comes our way.”

Vardanyan announced last month he was renouncing his Russian citizenship and moving permanently to Karabakh. He said at the time he was “not in Artsakh for a (government) position.”