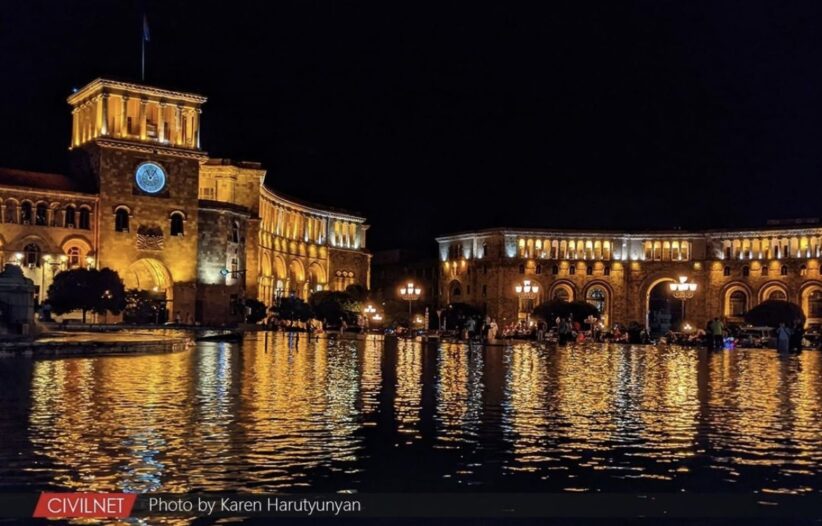 With the abhorrent attacks on Armenia last month, it has been very difficult in Armenian social media, coupled with the second anniversary of the war and all the horrible anniversaries which go with it. However the developments (quite a few of them positive for once) have also been so fast and furious that it is difficult to keep up! Here’s what has been catching our eye the past couple weeks on and surrounding those big stories.

The October 6 Meeting of the European Political Community brought many strange sights to behold, more than a few of them “memeable”. Firstly there were various iterations of these photos of Nikol Pashinyan and a bemused-looking Ararat Mirzoyan sitting around an unusually small table with Azerbaijani & Turkish Presidents Aliyev and Erdogan, with Hungarian President Orban (best known to Armenians for his extradition-turned-release of a certain axe-murderer) thrown in for good measure. Later French President Macron joined as well.

The most striking photo to come of it was this one of the leaders at an evening meeting, which many tweeters compared to an Edward Hopper painting. Truly a “wish-we-were-a-fly-on-the-wall” moment.

Speaking of somewhat awkward moments, the Armenian national football team greeted its upcoming competitors just selected for 2023 UEFA EURO qualifiers, which just happened to include Turkey. More than a few couldn’t help but have an “are you sure this isn’t rigged?” reaction to the fact the one and only other time Armenia was drawn with Turkey, it set the stage for the famous “Football Diplomacy” between the two countries in 2008 which led to the ultimately failed Protocols. It just so happens there’s talk in the air of a detente between Armenia and Turkey once again (given the inevitability of geography, and despite its ongoing vigorous military support of Azerbaijan) … Hmmm…

Commenting on last month’s attacks, every Armenian’s “Morkour” Cher told her 4 million followers about her 1993 experiences in Armenia and Azerbaijan’s clear intent on forcing its will upon Armenia.

A few days later, President Macron commented on the conflict as well, accusing Russia of deliberately provoking Azerbaijani attacks on Armenia. He received a great deal of criticism from Azerbaijan for the comments, and due to a mistranslation by Reuters in which it claimed he called Karabakh a “centuries-old conflict” rather than what he actually said, a “decades-old dispute”, he was unfairly condemned for misrepresenting the dispute. Macron also noted Turkish responsibility in the situation, and perhaps most strikingly, declared that Russia’s attempt to destabilize the situation in the Caucasus is an attempt to destabilize not just Armenia, but “all of us.” Perhaps “us” here means France, or possibly the entire western order? Gives some insight into what they are thinking in Washington as well, with Speaker Pelosi’s recent trip to Armenia and the flurry of engagement we’ve seen with Armenia as of late.

Speaking of the US, an election less than a month away will determine if Nancy Pelosi loses her speakership over the U.S. House. Many have their eyes on a Senate race in Pennsylvania. A certain Dr. Oz is running for Senate in the state even though he doesn’t even live there, and control of the House of Representatives could hinge on that single election. Oz has been condemned for denial of the Armenian Genocide and close ties to President Erdogan, and when pressed his campaign could not bring itself to mention it. Philadelphia has a large Armenian community and they recently were out protesting Oz’s campaign office, while his opponent John Fetterman tweeted a recognition in response.

Social media brought to our attention that since May there has been a (poorly made) Turkish game on the “Steam” platform which puts the player in the role of invading Armenia and exterminating numerous Armenians along the way. The Lemkin Institute, which has already issued multiple “Red Flag alerts” regarding genocidal rhetoric against Armenia both from Azerbaijan’s leaders and on social media, issued this statement calling for the game to be taken down, though it still appears to be available for anyone to play. The game costs $7.99, with both Steam and the developer Crescent Games (real subtle name there guys) profiting off what nearly mirrors the horrible scenes which occurred last month.

Kanye West, the now ex-husband of Kim Kardashian, has been making unfortunate waves lately of the anti-Semitic variety. The Holocaust Museum LA sent him a very pointed message that it is their mission to commemorate and educate regarding all genocides, including the Armenian one, pointedly noted that as Kanye’s children are part Armenian they would have been subject to genocide themselves had they been alive in 1915.

Have you been watching what has been going on in Scandinavia? If not, you should, as the Aliyev-sponsored “Azerbaijani diaspora” there has been throwing temper tantrums at just about everyone who gets in their way regarding an investigative reporter who has been investigating their corruption. Investigative reporter Rasmus Canbäck has come under a mountain of threats from both the Azerbaijani embassy in Sweden and a few figures who appear to be unofficial mouthpieces for Aliyev in the region. Noted research analyst Erik Meyersson described the situation best in his tweet above.

We go from Scandinavia to western Africa, where the Azerbaijani diaspora has also apparently gotten active through someone’s genius idea to buy a well for a presumably needy village so that they could slap a vanity name onto it. We don’t think you need to hit translate to know what it is. File this one under ‘cringe’ alongside the Azerbaijani ambassador to Switzerland who claimed a great victory in getting two official stamps issued there commemorating Azerbaijan’s capture of Shushi, only to have it quickly revealed they were in fact merely novelty stamps through a program which allows anyone to upload their own personal photos for use as postage.

After a very scary couple of months for Armenians, there is hope that the EU mission currently making its way to the Armenian border will stave off an attack for the time being. It should be noted that while President Aliyev is extremely upset about this mission and refused to allow it on his side of the border, its necessity was made clear as a direct result of his September 13 attack.

Finally, we are leaving you with this moment of Zen from one Armenian to another (who happens to be a Michigan state representative).