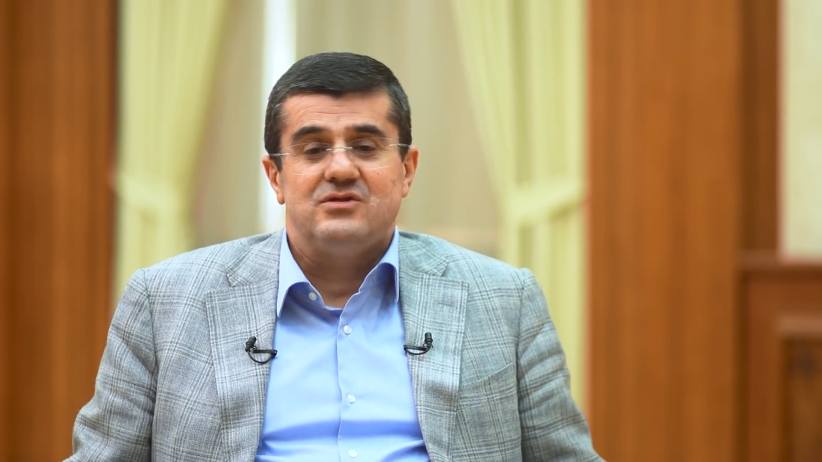 “The people of Artsakh’s right to self-determination is not subject to discussion,” Harutyunyan said. “The idea of Artsakh being a part of Azerbaijan is a forgotten idea. We never even think about it…We had, have, and will have our de facto independence. Have no doubt about it.”

Stepanakert remains open to “political contacts or negotiations” with Baku, he continued, noting that the sides have already been in touch for two years to resolve “many important issues,” including the fate of missing people and infrastructure problems.

At the same time, Harutyunyan stressed that ethnic Armenian control of Karabakh remains his administration’s red line, saying, “We are obliged to do so (enter into negotiations) without giving up our right to self-determination and without questioning our path to independence.”

Conceding that resolving the Karabakh conflict has faded from the focus of negotiations — “the main regional issue has become the conflicts and military operations between Armenia and Azerbaijan” — Harutyunyan argued that the authorities in Karabakh “should soberly evaluate this situation to determine our preferred political course.”

He added that “the presence of (Russian) peacekeepers in all meetings that take place (between officials from Stepanakert and Baku) is always mandatory. Contacts without the peacekeepers did not happen and will not happen.”

Turning to the subject of the peacekeeping mission in Karabakh, Harutyunyan stressed Russia’s key role as the region’s security guarantor, while adding that his administration “also expects much more reliable guarantees from Russia.”

“I cannot imagine Artsakh’s future without Russia, first of all in terms of resolving security issues,” he said.

Those are all, more or less, points Harutyunyan already made in a lengthy video message last month days after Azerbaijan’s unprecedented attack on Armenia, where he warned that “the Armenian state is standing on the threshold of a new and catastrophic war.”

In that address, Harutyunyan also pledged to make major changes to Karabakh’s system of government “in the near future,” including “constitutional reforms” and “important personnel and institutional changes.”

Vardanyan announced Thursday he would accept the role and begin in early November.