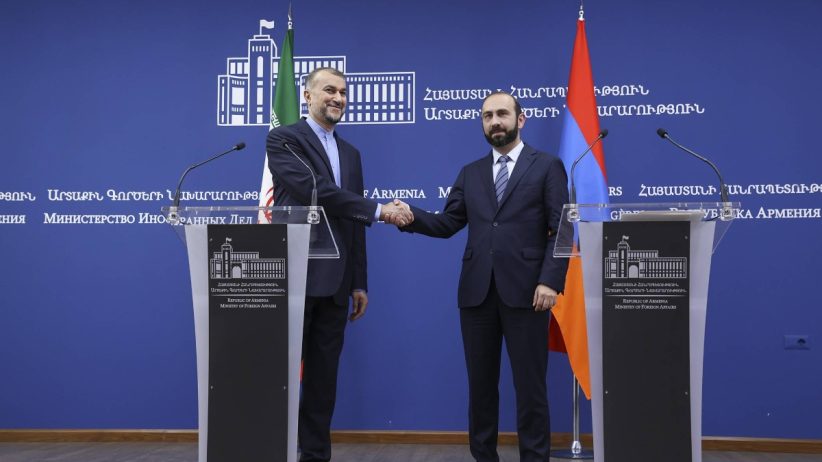 Armenian Foreign Minister Ararat Mirzoyan called on Baku and Ankara to enter into more “constructive” negotiations with Yerevan at a press conference Thursday alongside his Iranian counterpart.

Continuing, he said that Azerbaijan’s “threats of use of force” question its “sincerity” in peace talks and do not show “attempts to achieve peace.”

Turning to Armenia’s ongoing efforts to normalize relations with Turkey, Mirzoyan called on Turkey to “connect this process less and less with the negotiation process between Armenia and Azerbaijan and, on the contrary, realize that success in the Armenia-Turkey dialogue can have a positive impact on Armenia-Azerbaijan negotiations.”

“Turkey’s more constructive position in the Armenia-Turkey process,” he argued, “would have a positive impact on the Armenia-Azerbaijan process.”

Finally, Mirzoyan reiterated that Yerevan rejects Baku’s demand for a “corridor” through Armenia to connect mainland Azerbaijan with the Nakhichevan exclave, stressing that Armenia is “ready to open the roads for Azerbaijani passenger and cargo transportation” as long as they “remain under the sovereignty of the countries through whose territory they pass and operate according to those countries’ legislation.”

Mirzoyan placed the blame squarely on Azerbaijan for the fact that regional transit links remain closed, calling out “Azerbaijan’s unyielding behavior in this matter.”

Iranian Foreign Minister Hossein Amir-Abdollahian, paying an official visit to Armenia, pledged that “the Iranian side will absolutely not accept the changes of historical borders in the region, this is our red line. And we will take all steps to thwart every such intention.”

He also hit out against the European Union’s formal decision earlier this week to temporarily deploy a civilian mission to the Armenia side of the border with Azerbaijan, saying, “The Iranian side is completely against the presence of foreign representatives in the region, either in the territory of Armenia or Azerbaijan.”

Mirzoyan and Amir-Abdollahian are due to open a new Iranian consulate in the town of Kapan Friday. It is set to be the first permanent diplomatic mission of any country in Armenia’s southernmost Syunik region, which suffered heavily in Azerbaijan’s unprecedented attack on Armenia last month.