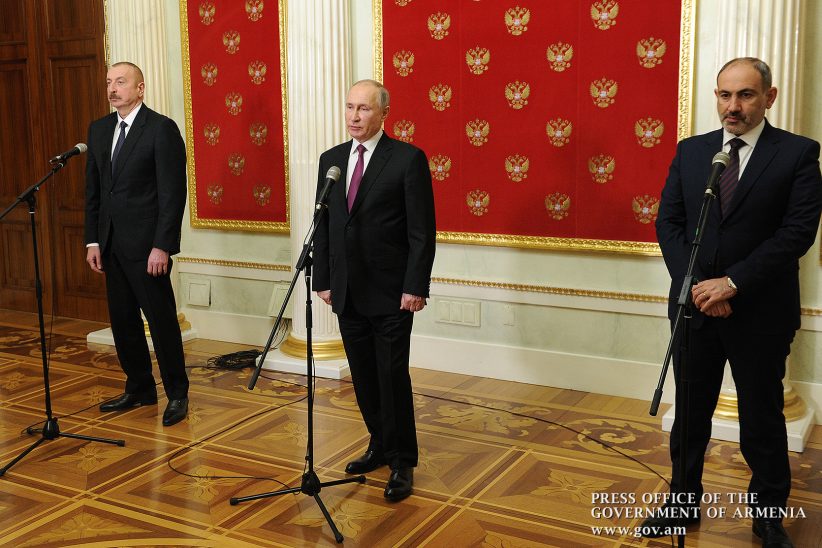 Russian officials on Monday confirmed earlier reports in the Russian media that preparations are underway for a summit between the leaders of Armenia, Azerbaijan, and Russia, while Maria Zakharova, the spokesperson for Russia’s Foreign Ministry, again hit out at Western involvement in the region in a combative statement.

“The summit is being prepared. We will provide further information about the date and place,” Dmitry Peskov, the Kremlin spokesperson, was quoted as saying by the Interfax news agency on Monday. He did not elaborate.

The Vedomosti business daily reported earlier that “such talks may take place in the last days of October,” citing unnamed diplomatic sources.

Earlier this month at a summit of post-Soviet countries in Kazakhstan, Russian President Vladimir Putin invited Armenian Prime Minister Nikol Pashinyan and Azerbaijani President Ilham Aliyev to another round of talks “in Russia in any place at any time.”

Zakharova also confirmed on Monday that Russia is preparing to host another meeting with Pashinyan and Aliyev, noting that “discussions are planned on the whole range of trilateral and bilateral issues.”

As of noon local time Tuesday, Neither Armenia’s nor Azerbaijan’s Foreign Ministries had commented publicly on the developments.

In her statement, Zakharova also hit out repeatedly at Western countries’ deepening diplomatic involvement in the region following Azerbaijan’s unprecedented attack last month on Armenia, accusing the West of “clearly trying to transfer the confrontational schemes worked out in Ukraine” and to “squeeze Russia out of the South Caucasus.”

Noting that Russia remains committed to its “strategic alliance and multifaceted cooperation with Armenia” and dismissing accusations that Moscow is not fulfilling its security obligations to Yerevan as “unsubstantiated,” Zakharova stressed that “it was our country (Russia) that stopped the war in November 2020 (and) sent in peacekeepers who brought peace and stability to the region.”

“At all levels, we continue to work with our partners toward a comprehensive normalization of relations between Azerbaijan and Armenia,” she concluded.

The talk of another Armenia-Azerbaijan summit in Russia comes as Moscow appears to be seeking to reassert its role in mediating between Yerevan and Baku.

For months, Russia, the region’s traditional security guarantor, has appeared preoccupied by its war against Ukraine, while the Collective Security Treaty Organization, a Russian-led military alliance, pointedly declined to assist Armenia after Azerbaijan’s attack, despite treaty obligations.

Armen Grigoryan, the influential head of Armenia’s Security Council, said in an interview with Armenian television earlier this month that Armenia expects to sign both a peace treaty and a separate border delimitation deal with Azerbaijan by the end of the year.