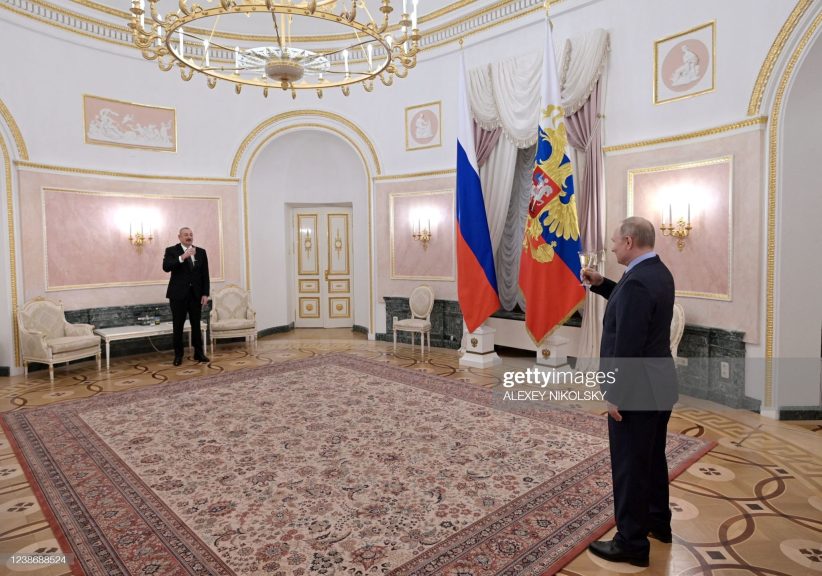 Russian President Vladimir Putin (R) and his Azerbaijani counterpart Ilham Aliyev toast after a joint press conference following their talks at the Kremlin in Moscow on February 22, 2022. (Photo by Alexey NIKOLSKY / SPUTNIK / AFP) (Photo by ALEXEY NIKOLSKY/SPUTNIK/AFP via Getty Images)

The article was published in World Energy Weekly (October 24 issue), a publication of Petrostrategies, a French think-tank specializing in energy issues.

At least 250,000 b/d of Russian oil seems to have been transiting through Azerbaijan via the BTC pipeline since May 2022

Azerbaijan’s oil production and exports have been developing in divergent ways for six months, without any official explanation for such a phenomenon. The former is decreasing while the latter is increasing, and the discrepancy between the two has been growing over the last few months. During the first four months of 2022, Azerbaijan’s total output averaged 695,000 b/d (580,000 b/d of crude oil and 115,000 b/d of condensate). Its production then began to decline in May 2022, falling to an average of 635,000 b/d between June and August 2022 (some 525,000 b/d of crude oil and 110,000 b/d of condensate). In itself, such a decrease shouldn’t really attract any attention: after all, oil production in Azerbaijan has been declining since 2011, and will only begin to rise (by 100,000 b/d) as from next year, when BP starts production on the Azeri-Central-East (ACE) oil-bearing structure. The upturn is expected to last for four or five years, after which production will probably start to decline again, this time forever. Azerbaijan has so far produced 4.5 Gb of its total crude oil reserves (7 Gb).

What observers find intriguing is the fact that Azerbaijan’s oil exports have increased despite the fact that its production has been declining. According to figures released by the country’s news agencies, oil exports via the BakuTbilisi-Ceyhan (BTC) pipeline rose from an average of 565,000 b/d during the first quarter of 2022 to an average of 885,000 b/d between April and August of this year. Azerbaijan refines some 125,000 b/d of oil, which covers its domestic consumption and leaves a modest surplus (mainly diesel) available for export. Normally, the country’s exports of crude oil and condensate should therefore be some 125,000 b/d lower than its production. But while Azerbaijan’s production exceeded its exports between January and April 2022, the opposite occurred between May and August 2022, when it exported 250,000 b/d more than it actually produced via the BTC. How can this discrepancy be explained?

During the first four months of 2022, Azerbaijan’s oil exports were, in reality, somewhat larger than has been estimated so far, as volumes of oil that Azerbaijan routed to the Russian port of Novorossisk and the Georgian port of Supsa, on the Black Sea, also have to be taken into account. Shipments to the former amounted to around 20,000 b/d before Baku stopped them in May 2022, while deliveries to the latter totaled about 65,000 b/d until BP (which operates the Baku-Supsa pipeline) ended them in mid-March. If these figures are taken into account, production exceeds exports by only 45,000 b/d, rather than by 125,000 b/d, as should actually be the case (production minus refining). Could oil transported from Kazakhstan account for these discrepancies? No, as it was only on August 12, 2022, that Kazakhstan announced that it is planning to ship 1.5 MMt of oil via the BTC in 2023 and is also negotiating the shipment of 3.5 MMt via the Baku-Supsa pipeline. While the BTC has a capacity of 1.2 MMb/d, the pipeline has never been used at full capacity, as Azerbaijan’s oil output peaked at 980,000 b/d in 2010 before starting to decline.

Read more: Russia is looking at other ways to export gas to Europe: Petrostrategies

Russia is looking at other ways to export gas to Europe: Petrostrategies