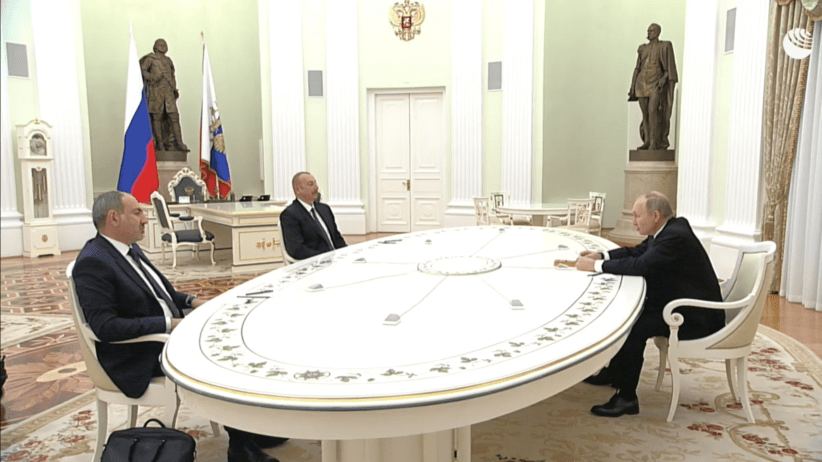 When asked if Pashinyan will meet with Aliyev during his trip to Sochi, Simonyan replied, “I suppose, yes.” He did not elaborate.

Kremlin spokesperson Dmitry Peskov confirmed Monday that Russia is preparing to host another round of negotiations between the Armenian and Azerbaijani leaders, but declined to give a date or location for the talks.

Putin invited Pashinyan and Aliyev to hold talks “in Russia in any place at any time” at a summit of post-Soviet countries earlier this month.

The apparent Russia summit comes as Moscow appears to be seeking to reassert its role in mediating between Yerevan and Baku, amid deepening diplomatic engagement in the region by Brussels and Washington.

For months, Russia, the region’s traditional security guarantor, has appeared preoccupied by its full-scale war against Ukraine, while a Russian-led military alliance pointedly declined to assist Armenia, despite treaty obligations, after Azerbaijan launched an unprecedented attack last month.

Russian Foreign Ministry spokesperson Maria Zakharova has repeatedly hit out against Western involvement in the South Caucasus as meddling. In a combative statement Monday, she said that “Washington and Brussels’ true aims are by no means the development of compromissory and balanced solutions, but rather self-promotion and squeezing Russia out of the South Caucasus.”

U.S. State Department spokesperson Ned Price quickly dismissed Zakharova’s remarks, saying at a press conference the next day, “We would certainly take issue with a characterization of our efforts being self-promotional…Our only goal here is to see and to help these countries (Armenia and Azerbaijan) work together to bring about a comprehensive and lasting peace.”

Commenting on next week’s apparent Russia summit, Price said, “It’s ultimately for Armenia and for Azerbaijan to decide whether President Putin’s invitation would be helpful or useful to them in pursuit of that lasting peace,” while warning that Russia’s invasions of Georgia and Ukraine “suggest that Moscow has little respect for its neighbors’ sovereignty and is hardly a reliable, long-term partner.”

It appears it will be a busy few weeks of diplomacy for Armenia and the region.

On Tuesday, Armenian Foreign Ministry spokesperson Vahan Hunanyan told the Armenpress news agency that officials from Yerevan and Ankara will meet “in the near future” on the Armenia-Turkey border to discuss steps to implement a breakthrough agreement reached over the summer to partially reopen the border.

The day before, Armenian Deputy Prime Minister Mher Grigoryan’s office told Armenpress that Armenia and Azerbaijan’s joint border delimitation commission will convene in Brussels in the first week of November.
Armen Grigoryan (no relation to Mher), the influential head of Armenia’s Security Council, said earlier this month that Armenia expects to sign both a peace treaty and a separate border delimitation deal with Azerbaijan by the end of the year.