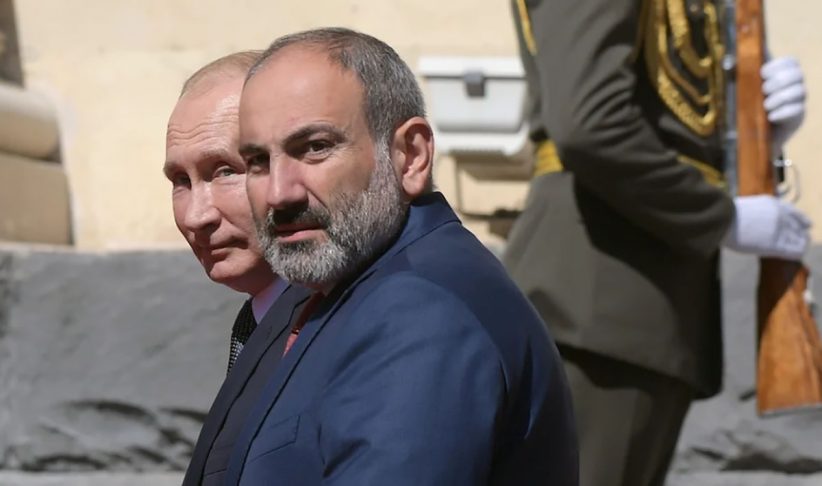 “In the beginning of September, Armenia gave its consent to work on the basis of the basic principles and parameters put forward by the Russian Federation to establish interstate relations between Armenia and Azerbaijan, and (Armenia) is ready to confirm this in Sochi,” Pashinyan wrote in Russian on his official Twitter account Friday morning.

Pashinyan is set to travel to the Russian city of Sochi Monday for another round of talks with Putin and, presumably, Azerbaijani President Ilham Aliyev. (Aliyev has not yet confirmed he will be participating in the summit.)

Pashinyan and Aliyev most recently held talks at the beginning of this month in Prague. Their latest three-way meeting with Putin took place last November, also in Sochi.

At that Sochi summit, the three leaders adopted a joint statement reaffirming their commitment to two earlier statements that established a ceasefire in Karabakh and formed a joint working group to reopen regional transit routes. Those statements form the basis of Russia’s mediation efforts.

At a parliamentary question-and-answer session earlier this week, Pashinyan reiterated his administration’s hope to reach both a peace treaty with Azerbaijan and a separate border delimitation deal by the end of the year.

“Our position is that this peace treaty is, of course, needed,” Putin said. “The question is which option to choose. This is a matter for Armenia, the Armenian nation, and the Armenian leadership. In any case, whatever option is chosen, if it leads to peace, we are all for it.”

“But we are not planning on imposing anything, we cannot and are not planning on dictating anything to Armenia,” he continued. “The so-called Washington (plan), as far as I understand, provides for the recognition of Azerbaijan’s sovereignty over Karabakh as a whole. If Armenia thinks (that this plan is the right one to choose) — let it be. We will support any choice by the Armenian nation.”

“If the Armenian nation and the Armenian leadership think that Karabakh has some peculiarities of its own, that these peculiarities need to be taken into account, and that somehow this needs to be provided for in a future peace treaty, then this is also possible. But of course, you need to negotiate with Azerbaijan” he added. “Armenia is our strategic ally and we, of course, to a large extent, keeping in mind Azerbaijan’s interests, will be guided by what Armenia itself will be offering.”

In his address, Putin also placed blame on Armenia’s past and present leaders for the country’s disastrous defeat in the Karabakh war two years ago, saying that Russia had previously put forward a plan where Yerevan would cede control to Baku of five of the seven districts surrounding Karabakh that Armenian forces controlled in exchange for retaining control of Karabakh and the other two districts.

“The Armenian leadership chose its own path,” Putin said. “As we know, this has led to the situation that has arisen today.”

Putin’s remarks Thursday were among his most explicit public comments to date on ongoing efforts to normalize relations between Armenia and Azerbaijan. His suggestion that a competing U.S. peace plan involves Armenia ceding Karabakh to Azerbaijan comes amid a growing rivalry between Russia and the West over influence in the region.

Recent developments suggest Moscow is trying to reassert its role in mediating between Yerevan and Baku, after appearing preoccupied for months by its full-scale war against Ukraine. Meanwhile, the weeks after Azerbaijan’s unprecedented attack last month on Armenia appear to have prompted deepening diplomatic engagement in the region by Brussels and Washington.