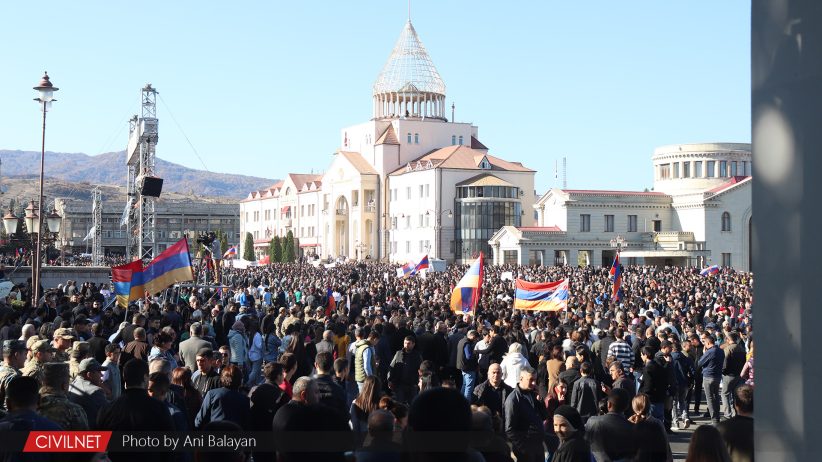 Karabakh residents gathered for a massive rally Sunday, as members of the local parliament unanimously adopted a lengthy statement rejecting any peace deal that would see Azerbaijan take control of the region.

The statement reads: “Artsakh has never been and will never be part of independent Azerbaijan. This very idea should form the basis of the settlement of the Azerbaijan-Karabakh conflict. Any attempt to forcibly annex Artsakh to Azerbaijan would be a gross violation of international law and an official license to commit another genocide against the Armenian people. Therefore, any document with such content is unacceptable for Artsakh.”

Continuing, the region’s parliament called on the authorities in Yerevan to “approach recognizing Azerbaijan’s territorial integrity with reservations, taking into account the fact that the Azerbaijan-Karabakh conflict is not settled.”

“Any document or proposal questioning the sovereignty of the Artsakh Republic, our right to self-determination, and the fact of its realization is unacceptable to us because it would not reflect the historical and legal realities,” the statement stressed.

At talks in Prague earlier this month, Armenian Prime Minister Nikol Pashinyan and Azerbaijani President Ilham Aliyev reportedly came to an agreement for Armenia and Azerbaijan to recognize each other’s territorial integrity.

Strikingly, Karabakh’s parliament also directly appealed to the authorities in Moscow, noting “Russia’s historical role in ensuring peace and stability in our region” and calling on the Kremlin “to continue its commitment to ensuring the security of the people of Artsakh” and “to introduce additional political and military mechanisms.”

Much of Sunday’s statement echoed points put forward by Karabakh lawmakers in a previous statement earlier this month preemptively rejecting any peace treaty between Yerevan and Baku that would not address the Karabakh conflict.

However, the direct appeal to Russia included in Sunday’s statement seems to represent a new development.

While Karabakh lawmakers voted to adopt the statement, residents gathered for a massive rally in central Stepanakert to protest any peace deal that would see Armenia cede control of the region to Azerbaijan.

Estimated by the authorities at about 40,000 people, it appears to be one of the largest rallies held in Karabakh in many years.

“I have never seen so many people in my hometown, Stepanakert. A huge turnout,” wrote noted regional analyst Tigran Grigoryan on Twitter.

Pashinyan and Aliyev are set to meet with Russian President Vladimir Putin in the Russian resort city of Sochi on Monday for negotiations.

Pashinyan’s administration has repeatedly said it wants to reach both a peace deal and a separate border delimitation agreement with Azerbaijan by the end of the year.

Divisions generated by the energy crisis are splitting the West