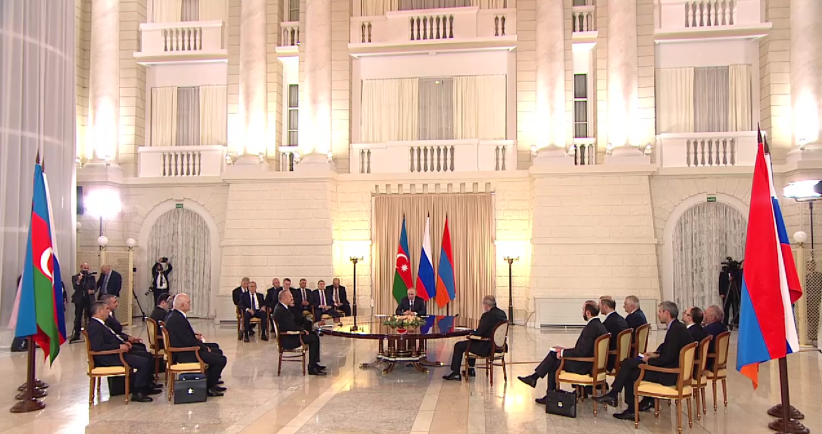 The leaders of Armenia, Azerbaijan, and Russia issued their fourth joint statement since the 2020 Karabakh war following lengthy talks Monday evening in the Russian city of Sochi, reaffirming their commitment to previous agreements and stressing the need for a final peace agreement.

Armenian Prime Minister Nikol Pashinyan, Azerbaijani President Ilham Aliyev, and Russian President Vladimir Putin “reaffirmed their commitment to strict observance of all previous agreements in the interests of a comprehensive normalization of Azerbaijani-Armenian relations and ensuring peace, stability, security, and the sustainable economic development of the South Caucasus,” said the statement.

“We agreed to refrain from the use of force of the threat of its use, to discuss and and solve all problematic issues exclusively on the basis of mutual recognition of sovereignty, territorial integrity, and inviolability of borders,” the statement continued.

“We underlined the importance of active preparation for the conclusion of a peace treaty between Azerbaijan and Armenia in order to achieve a sustainable and long-term peace in the region,” it added. “On the basis of the existing developments, it was agreed to continue the search for mutually acceptable solutions. Russia will provide all possible assistance to this.”

Monday’s statement also notes the “key contribution of the Russian peacekeeping contingent to ensuring security in its deployment zone,” but otherwise does not mention Karabakh in any way.

Monday’s statement does not extend the peacekeepers’ mandate, which is currently set to expire in 2025.

Announcing the statement, Putin called Monday’s summit “a very useful meeting” that “created a very good atmosphere for possible future agreements on some fundamental issues,” but also conceded that “frankly, it was not possible to agree upon everything, (and) some things had to be removed from the text previously worked out at the specialist level.” He did not elaborate.

“Russia, for its part, will do everything to ensure that a final and comprehensive settlement is reached,” Putin pledged.

Prior to his three-way talks with Pashinyan and Aliyev, Putin met separately with each leader.

At their one-on-one meeting, Aliyev told Putin that “the Karabakh conflict is already history, this was solved two years ago, therefore in this context there is practically nothing to discuss.”

In sharp contrast, Pashinyan stressed to Putin that “on (the topic of) Nagorno-Karabakh, the approaches proposed by the Russian draft of basic principles and parameters for establishing interstate relations between Azerbaijan and Armenia are acceptable to us.”

Pashinyan said the same on Twitter last week, adding, “We hope Russia will support its own proposals.”

Karabakh President Arayik Harutyunyan said over the weekend that his administration also supports Russia’s mediation efforts, writing on Facebook that “the Russian proposals mostly meet the minimum standards that ensure Artsakh’s security and do not call into question its future.”

Those comments came in response to remarks last week by Putin, who claimed that an apparent Washington-backed peace plan “provides for the recognition of Azerbaijan’s sovereignty over Karabakh as a whole.”

U.S. State Department Spokesperson Ned Price hit back at a press conference the next day, accusing Russia of spreading “misinformation and, probably more accurately, disinformation…when it comes to our intentions vis-à-vis Armenia and Azerbaijan.”

Monday’s joint statement was the fourth issued by Pashinyan, Aliyev, and Putin since the 2020 Karabakh war.

The first two statements established a ceasefire in Karabakh and formed a joint working group to reopen regional transit routes, while the third reaffirmed the leaders’ commitment to the two earlier statements. They form the basis of Russia’s mediation efforts.

Following those talks, Yerevan and Baku released a joint statement committing to recognize the other country’s territorial integrity and endorsing the temporary deployment on a European Union civilian monitoring mission to the Armenia side of the border with Azerbaijan.

Pashinyan and Aliyev’s last three-way meeting with Putin took place just under a year ago, also in Sochi.

Monday’s summit suggests Moscow is trying to reassert its role in mediating between Yerevan and Baku, after months of appearing preoccupied by its full-scale war against Ukraine. Azerbaijan’s unprecedented attack last month on Armenia seems to have prompted deepening diplomatic engagement in the region by Brussels and Washington.

Russia has repeatedly accused outside powers of attempting to meddle in the South Caucasus and “oust” Russia, the region’s traditional security guarantor — accusations that Washington has consistently dismissed.

On the eve of the summit, about 40,000 Karabakh residents held one of the largest rallies in the region’s history, while lawmakers in Stepanakert unanimously adopted a statement rejecting any deal that would see Azerbaijan take control of Karabakh.

Pashinyan has said he wants to reach both a peace deal and a separate border delimitation agreement with Azerbaijan by the end of the year.

Creating a global Armenian community in the aftermath of the war