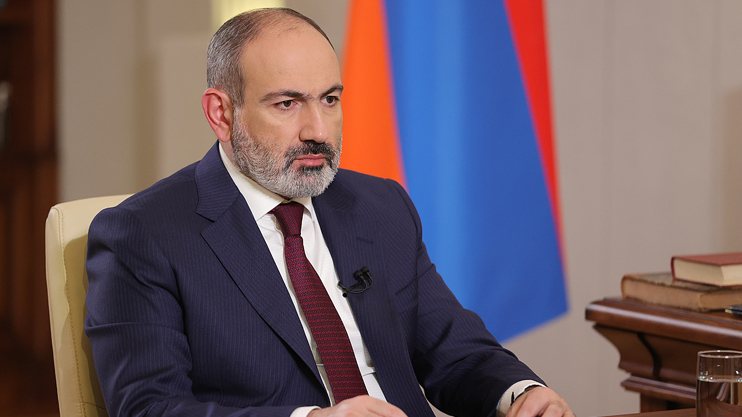 Armenian Prime Minister Nikol Pashinyan reiterated his administration’s readiness to enter into substantive peace talks with Azerbaijan in a primetime interview on public television Friday evening, laying blame for the lack of progress in negotiations squarely on Baku.

Azerbaijan is purposefully hindering negotiations in order to “create the prerequisites for a new escalation,” Pashinyan said, adding that Yerevan is ready to take steps to reopen regional transit links, delimit the Armenia-Azerbaijan border, and create a demilitarized zone along it.

“If Azerbaijan wants to resolve issues and not create tension, then everything can be resolved on a bilateral basis,” he stressed.

Pashinyan also repeated calls for Azerbaijan to withdraw all its troops from areas within Armenia proper and proposed establishing a 3-kilometer-wide demilitarized zone along the border stationed by international monitors.

He said Armenia’s negotiating team had earlier suggested creating a demilitarized zone along the border, with Yerevan and Baku conducting a mirrored withdrawal of troops under Russian supervision. Azerbaijan rejected the prospect, he noted.

Pashinyan also reiterated his administration’s willingness to move forward with an apparent Russian peace framework that, it is believed, would freeze or postpone talks on Karabakh’s status.

“During the meeting with the Russian president in Sochi (last month), I said that we fully support the Russian version, and we hope that Russia will support its own proposal,” he said.

Turning to the issue of Karabakh, which lies at the heart of the many disputes between Armenia and Azerbaijan, Pashinyan dismissed Azerbaijani President Ilham Aliyev’s repeated claims that the Karabakh conflict has been resolved.

“If Russia withdraws, international peacekeeping forces will come,” he speculated.

Pashinyan also repeated his administration’s position that “the Nagorno-Karabakh issue has never been a territorial dispute, it has always been a matter of rights and security (for Karabakh’s Armenians).”

Yerevan is in constant contact with the authorities in Stepanakert about the state of Armenia’s talks with Azerbaijan, Pashinyan stressed, adding that Karabakh should be a direct party to negotiations.

“That is the best way to protect the rights of our compatriots in Nagorno-Karabakh,” he said.

Pashinyan also touched on Armenia’s ongoing negotiations with Turkey, noting that “we all know Azerbaijan is present in all our discussions with Turkey” but also expressing confidence that Yerevan and Ankara could still make significant progress on normalization “if there is consistent work and the political will and desire” to do so.

Azerbaijani troops fire mortars on Armenian positions, despite pledge not to use force

The economy is still booming, but how to sustain it? BUSINESS ARMENIA