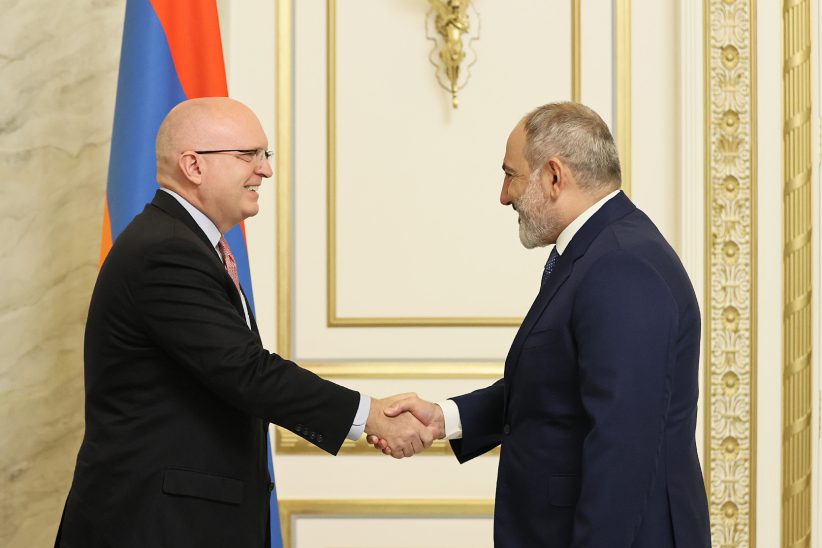 Assistant Secretary of State Karen Donfried called the negotiations a “historic opportunity to secure lasting peace” in her advance written testimony, while Philip Reeker, the U.S. envoy to the Minsk Group, said in his statement he “echo(ed) Assistant Secretary Donfried’s optimism about the potential for peace.”

“We are encouraged by the pace of engagement by Armenian and Azerbaijani leadership in the peace process,” Reeker added. “The pace and depth of the current discussions demonstrates a clear potential for a settlement that could end decades of conflict.”

Donfried and Reeker repeatedly underscored Washington’s readiness to organize more rounds of talks between Yerevan and Baku and support for the European Union’s facilitation efforts, while also taking care to stress that “the substance of these discussions is being led by Armenian and Azerbaijani representatives themselves.”

Turning to the Karabakh conflict, which lies at the heart of the many disagreements between Armenia and Azerbaijan, both officials said they welcomed Armenian Prime Minister Nikol Pashinyan’s landmark April speech, where he said Armenia should “lower the bar” of its expectations for Karabakh’s final status.

That address was widely interpreted in Armenia as signaling Pashinyan’s willingness to make major concessions to Azerbaijan as part of a peace deal, prompting two and a half months of protests in Yerevan and a boycott of parliament by the country’s opposition.

To that point, Reeker echoed Pashinyan’s position that the Karabakh issue “is not about territory, but about rights and security” and called for an “international mechanism” to be set up to protect Karabakh Armenians’ “rights and security.”

At the hearing, Reeker notably conceded that the Minsk Group, a body set up in the early 1990s by the Organization for Security and Cooperation in Europe to find a peaceful resolution to the Karabakh conflict, is “not functioning,” even though its “mandate remains.”

The group, co-chaired by France, Russia, and the United States, has been effectively frozen since February, when relations between Moscow and Washington collapsed over Russia’s full-scale invasion of Ukraine. Meanwhile, Azerbaijan argues its victory in the 2020 Karabakh war has rendered the group’s mandate moot.

Azerbaijan has “simply said they will not deal with the Minsk Group anymore,” Reeker told the Senate committee, adding that Igor Khovaev, Russia’s Minsk Group envoy, “has never been in touch” with him.

During the hearing, senators repeatedly pressed Donfried and Reeker over U.S. security assistance to Azerbaijan, which has topped $160 million since 2002. Donfried maintained that U.S. military aid was not being “used for offensive purposes against Armenia” and said Washington regularly conducts audits to ensure that is the case.

Committee chairman Bob Menendez, D-N.J., hit back, calling her and Reeker’s answers to his questions “totally, totally unacceptable” and saying it was “one of the most disappointing hearings I’ve ever held.”

“How on Earth can the United States justify sending any kind of support, security or otherwise, to a regime in Baku? It’s inexcusable,” Menendez said. “I personally think it’s morally repugnant, and it makes a mockery of the Freedom Support Act.”

Section 907 of the Freedom Support Act restricts most U.S. aid to Azerbaijan, but subsequent legislation has allowed for presidents to issue waivers on an annual basis, which they have done every year since 2002.

A study made public in March by the Government Accountability Office, which audits the federal government’s activities, found that the State and Defense Departments had, since 2014, “not fully met” reporting requirements that govern how agencies apply for Section 907 waivers. Menendez requested the study.
Also read: Biden administration again waives restrictions on aid to Azerbaijan

Aliyev’s pipeline politics is about politics, not energy security