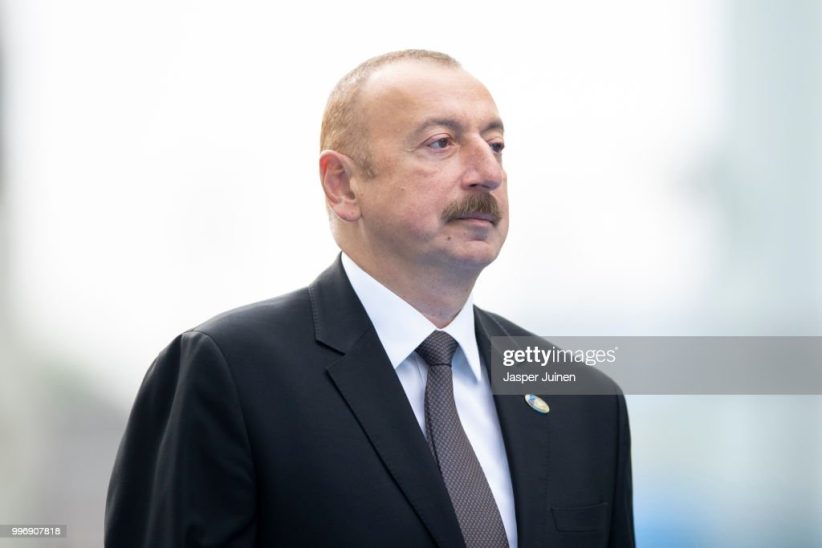 BRUSSELS, BELGIUM - JULY 12: President of Azerbaijan Ilham Aliyev arrives at the 2018 NATO Summit at NATO headquarters on July 12, 2018 in Brussels, Belgium. Leaders from NATO member and partner states are meeting for a two-day summit, which is being overshadowed by strong demands by U.S. President Trump for most NATO member countries to spend more on defense. (Photo by Jasper Juinen/Getty Images)

In his speech commemorating Azerbaijan’s victory in the 2020 Nagorno-Karabakh war, Azerbaijani President Ilham Aliyev spoke in the town of Shushi (Shusha), where he admitted that Azerbaijan had started that war.

“We are not intimidated by anyone. If we were afraid of someone, we would never have started the Second Karabakh War,” he stated.

Aliyev had made a similar comment in August 2021. “Azerbaijan started the War of Salvation, liberated its historical lands from the occupiers, restored historical justice, expelled the occupiers from our lands and restored its territorial integrity,” he told CNN Türk.

These statements stand in stark contrast with Aliyev’s previous comments on how and who started the 2020 war. Though accepted by observers and analysts as common knowledge, Azerbaijan had long put the blame on Armenia for igniting the 44-day war.

On September 27, 2020, the first day of the war, Aliyev stated in a televised speech: “Armenian armed forces fired on our settlements, as well as our military positions… […] What objectives did Armenia pursue by committing this provocation? First of all, Armenia plans to occupy Azerbaijani lands and does not conceal that.” On the same day he spoke at the Security Council meeting, where he said that he instructed the Azerbaijani army to launch a “large-scale counter-offensive” against Armenia. He claimed Armenia’s “military provocation was pre-planned”.

In fact, three days before launching a war, Aliyev laid the groundwork for a military assault on Nagorno-Karabakh. “Hostile, Azerbaijanohobic statements and provocations of Armenian leadership demonstrate that Armenia is preparing for a new aggression against Azerbaijan,” he claimed in his speech at the United Nations General Assembly.

In an interview with Fox News almost a month into the war, he stated: “It was not Azerbaijan who started the firing on 27th of September. […] It was Armenia who launched an attack on the 27th of September.” In another interview, with the BBC, a few days before ceasefire, he doubled down on that narrative. Armenia “started to shell our cities on the 27th of September, and we had the first victims in the early hours, maybe early minutes among civilians and among our military servicemen. They shelled us with heavy artillery. So, that’s how it started.”

The Armenian villages within the scopes of Azerbaijani soldiers