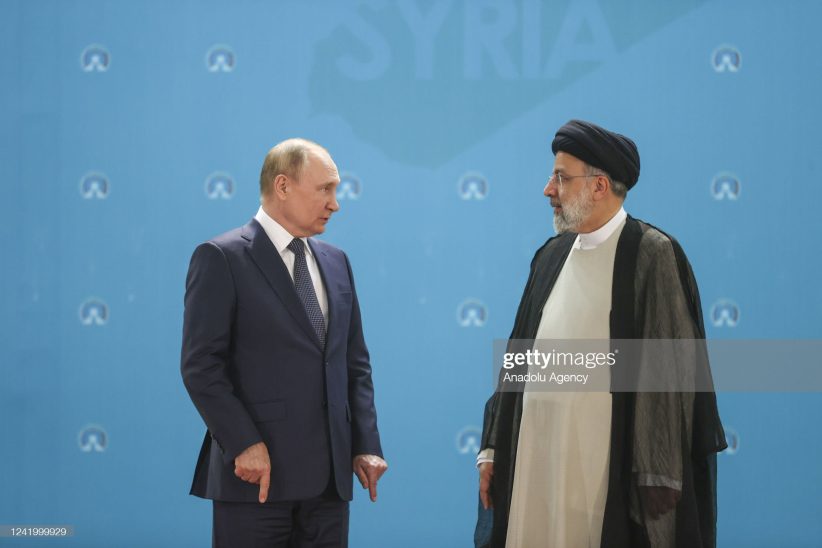 The article was published in World Energy Weekly (November 21 issue), a publication of Petrostrategies, a French think-tank specializing in energy issues.

The situation created by the war in Ukraine may make it possible for Iran and Russia to realize an old dream: to make the most of the possibilities offered by their respective geographical positions and their complementarities in the energy sector. Sanctions against Russia’s oil and gas sector have prompted the latter to carry out energy cooperation projects with Iran, some of which were initiated as early as the 2000s, but which had either fizzled out after a false start or not been launched at all. The revival of these projects and the addition of new avenues of cooperation lay at the core of Vladimir Putin’s visit to Tehran in mid July 2022, his first trip abroad since the outbreak of war in Ukraine. Immediately afterwards, NIOC and Gazprom signed an MoU providing for Russian investments of some $40 billion in Iran’s energy sector, in addition to exchanges of oil, gas and electricity in the form of purchases, barters and swaps.

The two countries have so far compiled an impressive list of cooperation projects. PETROSTRATEGIES has identified at least eight bundles of projects:

– redevelopment and development of three gas fields and six oil fields in Iran;

– construction of gas pipelines to Pakistan and Oman;

– construction of LNG plants in Iran;

The latter project has already started, as has also the import of Russian refined products. The two parties estimate that their potential oil swaps could amount to 10 million metric tons/annum (or some 200,000 b/d, a volume equivalent to the amount of Russian oil transiting through Azerbaijan and the BTC pipeline) while their natural gas swaps could reach 15 bcm/annum.

The Russians are reportedly investing in the gas fields of South Pars (where the Iranians are encountering pressure drop problems), North Pars and Kish (which is yet to be developed); they are said to be developing the oil fields of Ab-Teymur, Azar, Changouleh, Cheshmeh-Khosh, Karanj and Mansouri. Iranian Oil Minister Javad Owji has stated that his country has developed a new contract model for these fields, in which the Iranian government guarantees the interests of investors. In mid-October, he emphasized that the contract model is very attractive to Russian investors, and offers a golden opportunity for Iran to sign agreements with the Russians. He believes that contracts to develop the fields will be signed by the end of the current Iranian year (March 20, 2023). The Iranians have reportedly decided to increase their upstream cooperation with the Russians, as they are satisfied with Zarubezhneft’s work on the Aban and Paydar fields, in collaboration with Iran’s Dana Energy.

Why did NIOC choose Gazprom to be its partner in these very ambitious projects? Of course, Zarubezhneft isn’t big enough and Lukoil is a private company. But why wasn’t Rosneft selected, considering that the Russian government controls it and its CEO (Igor Setchin) has Vladimir Putin’s complete trust? The answer probably lies in the fact that the current closure of the European market to Gazprom considerably limits the group’s export and foreign development prospects. The only future prospects left for its gas are the Chinese market and LNG. And as far as oil is concerned, it has a subsidiary, GazpromNeft. Iran undeniably offers Gazprom vast scope for development in oil, gas and even LNG.

In LNG, Iran and Russia are facing the same problem: their inability to access liquefaction technologies, all of which are provided by the West. Or were, one should say, as Russia’s Novatek has made some progress in this area. The company is the main shareholder in Russia’s Yamal LNG (17.4 MMt/annum), Arctic LNG 1 (20 MMt/annum) and Arctic LNG 2 (19.8 MMt/annum) plants. It has developed a liquefaction process called Arctic Cascade, which has enabled it to build a train producing 900,000 tonnes/annum at Yamal LNG. It is now trying to complete a larger liquefaction train (2.5 MMt/annum) using its technology. It is by no means inconceivable that Iran will be able to use this technology to launch its very first LNG project with Gazprom.

The proposed oil and gas swaps aim to serve both Russian and Iranian interests. They would allow the former to partly circumvent the European embargo against its hydrocarbon exports. Iran would receive Russian oil at Neka in the Caspian Sea. In exchange, Tehran would supply Russia with condensates in the Gulf. As far as Russian gas is concerned, initial volumes of 6 MMcm/d arriving in Iran via Azerbaijan and 9 MMcm/d via Turkmenistan have been mooted, equivalent to some 5.5 bcm/annum. Turkmenistan would receive Russian gas and would in turn supply Iran with an equivalent volume of gas produced domestically. Iran’s imports would grow, allowing it to increase (or maintain) its gas sales to Turkey and Iraq. They would also allow Iran to solve an old yet recurrent problem: supplying its northern provinces reliably in winter. This is always difficult, as all its fields are located in the south (in the Gulf region), its gas pipelines and networks are saturated, and consumption is continuing to grow, encouraged by very low gas and power prices.

The fact that the growing cooperation between Iran and Russia in oil and gas was decided at a political level, despite the fact that the two countries are competitors in the oil market, especially in Asia, makes it all the more remarkable. Since the beginning of the war in Ukraine, Russia has substantially increased its oil exports to Asia (especially to China and India), giving its customers large discounts on sales prices. In so doing, it is competing almost “unfairly” with other exporters such as Iran (and Saudi Arabia). At present, trade between Russia and Iran mainly involves agricultural products, and represents just over $4 billion/annum ($3.1 billion in Russian exports and $1 billion in Iranian exports). Moscow and Tehran have decided to quickly increase this figure to $10 billion/annum. These exchanges would be denominated in national currencies, and Russian banks would finance planned investments in Iran’s upstream sector.

Armenia and its remarkable talent pool