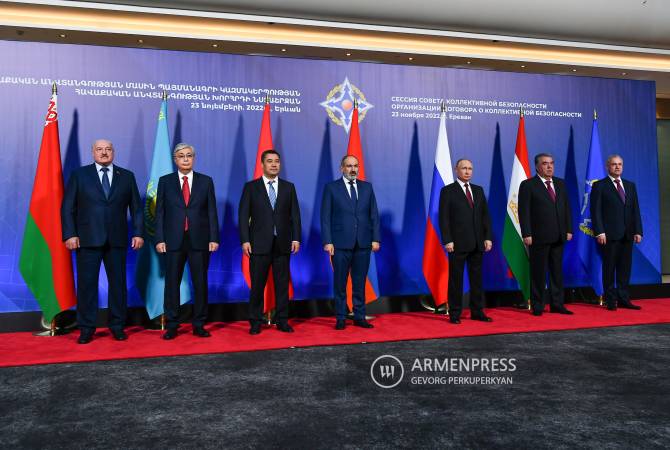 A major summit of the leaders of the Collective Security Treaty Organization, a Russian-led military alliance, ended in Yerevan Wednesday without an agreement on providing defense aid to Armenia after Prime Minister Nikol Pashinyan refused to sign a declaration to that effect.

Pashinyan said he decided not to sign the declaration because it did not include a “clear political assessment” condemning Azerbaijan’s incursions into Armenian territory in May and November of last year and September of this year.

Getting the CSTO to send military assistance to Armenia and to condemn Azerbaijan’s attacks were two of Yerevan’s key demands going into the summit.

Belarusian President Alexander Lukashenko said Armenia’s negotiators proposed adding two points to the declaration, but “we decided not to accept them.” He did not elaborate on the matter, though he did project optimism at the prospect of Armenia and Azerbaijan reaching a peace deal, which has eluded negotiators for over three decades.

In his opening remarks at the summit, Pashinyan called the alliance’s non-response to Azerbaijan’s incursions into Armenia “saddening” and said it “greatly damages the CSTO’s reputation” and “raises fundamental questions” about the alliance’s effectiveness.

During Azerbaijan’s unprecedented assault on three dozen Armenian municipalities in September, Armenia formally appealed to the CSTO for help, but the alliance pointedly declined to send military assistance, despite treaty obligations, and only dispatched a fact-finding mission to the ground after the United States brokered a ceasefire.

That has prompted unusually harsh and sustained criticism of the alliance in Armenia, with Armen Grigoryan, the chief of the country’s powerful Security Council, bluntly telling reporters days after the attack that Yerevan’s “expectations have not been met.”

Pashinyan has repeatedly contrasted the alliance’s inaction in Armenia with its swift and decisive response to mass civil unrest that shook fellow alliance member Kazakhstan in January, including in his address to the other CSTO leaders Wednesday.

Following the summit, Pashinyan met one-on-one with Russian President Vladimir Putin, who, like Lukashenko, said he was optimistic about the chances of Armenia and Azerbaijan reaching a peace agreement.

“Of course, it is never possible, or perhaps very rarely possible, to reach agreements on all issues, but overall, our work was very intensive and useful,” Putin said, referring to Pashinyan’s refusal to sign the declaration on military aid to Armenia.

It marked a rare overseas trip for Putin, who has traveled abroad just a handful of times since launching a full-scale war against Ukraine in February. It was also Putin’s first visit to Armenia since the Karabakh war two years ago.

Meanwhile, small numbers of demonstrators, including some of the tens of thousands of Russians who have relocated to Armenia this year, gathered in Yerevan to protest Putin’s arrival and call for Armenia to withdraw from the CSTO.

“For decades, Armenia has been paying Russia for security guarantees, paying a heavy price,” said Daniel Ioannisyan, a well-known Armenian civil society activist. “It turned out that Armenia does not receive any security from the CSTO or Russia. And we have gathered here to say that there are people in Armenia who do not agree with that.”

With additional reporting by Anya Eganyan

Putin arrives in Armenia for CSTO summit, as protests take place against alliance