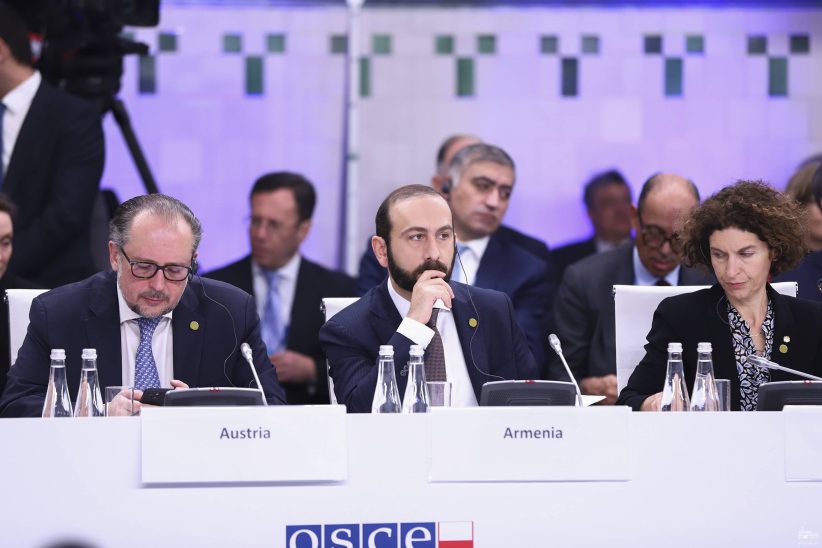 Foreign Minister Ararat Mirzoyan said Thursday that Armenia “has shown political will and has been taking decisive steps to open a new era of peace and stability in the South Caucasus,” as his ministry issued a statement announcing Armenia and Hungary will be reestablishing relations.

In a speech to this year’s OSCE ministerial conference in Poland, Mirzoyan stressed that Armenia remains ready to reopen regional transit routes and take steps to delimit the Armenia-Azerbaijan border, “despite the frequent provocations from the Azerbaijani side.”

Mirzoyan underscored his government’s position that any newly opened route should come under the control of the country through which it runs, pushing back on Baku’s long-standing demand for Yerevan to set up a corridor through Armenia to connect mainland Azerbaijan with its exclave of Nakhichevan.

Mirzoyan also warned that border delimitation efforts “should not turn into an exercise of putting forward territorial claims against Armenia” and reiterated Armenia’s commitment to the Alma-Ata Declaration, a 1991 treaty saying that international borders between former Soviet countries should be based on communist-era administrative boundaries.

At a press conference earlier in the day, Russian Foreign Minister Sergey Lavrov — who was pointedly excluded from this year’s OSCE summit — said Armenia’s decision to commit to Alma-Ata earlier this year amounted to a recognition of Azerbaijan’s claims over Karabakh.

Alma-Ata has also made it harder for Moscow to mediate between Yerevan and Baku, Lavrov said, in a clear dig at Armenia’s leadership.

As a first step, “the two governments will appoint non-resident ambassadors,” the statement said, adding that “the necessary diplomatic and administrative procedures will begin in the coming days.” It did not elaborate on the timeline.

Armenia broke off relations with Hungary ten years ago, when the Hungarian government extradited Azerbaijani army officer Ramil Safarov back to Azerbaijan after convicting him of murdering Armenian army lieutenant Gurgen Margaryan at a NATO training course in Budapest.

Last December, Hungary mediated the handover of five Armenian prisoners of war captured by Azerbaijan during clashes along the border in Syunik the month before.

A Christmas bazaar to fund school renovations in rural Armenia