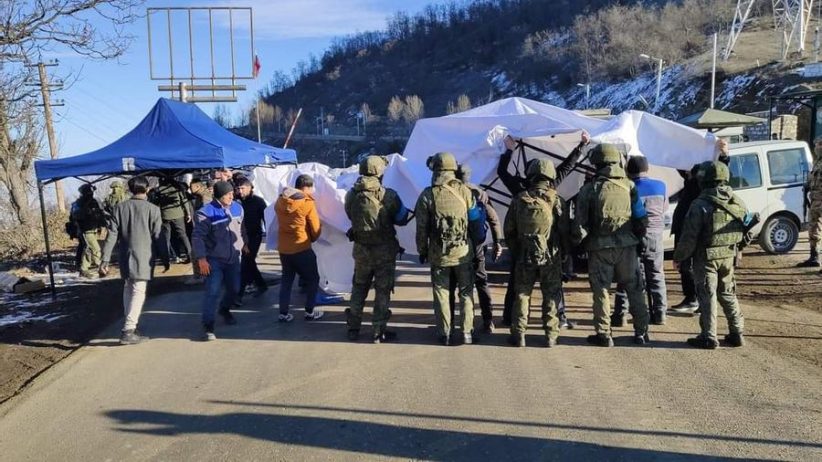 A group of Azerbaijanis wearing civilian clothing has again blocked the Goris-Stepanakert highway, the authorities in Karabakh said Monday, marking the second time this month that the only overland route between Armenia and Karabakh has been closed.

The group began blocking the highway at around 10:30 this morning “for environmental reasons,” Karabakh’s state-run InfoCenter reported, adding that the Russian peacekeepers in the region have already been notified of the closure.

A photograph posted by the InfoCenter appears to show a row of white tents set up across the road.

Marut Vanyan, a Stepanakert-based freelance reporter, said on Twitter the closure is taking place near the village of Karin Tak, not far from the city of Shushi.

The peacekeepers have not publicly commented on the matter.

Earlier this month, the Goris-Stepanakert highway was closed for several hours, again near Karin Tak, when a group of staffers at Azerbaijan’s ecology and economy ministries and employees at the state-owned AzerGold mining company blocked the road.

They said they were “investigating and monitoring the illegal exploitation of minerals” in the area, Azerbaijani media reported.

In that incident, the Russian peacekeepers facilitated the negotiations that led to the road’s reopening.

UPDATE (4:30 p.m.): After six hours, the highway remains closed. Negotiations to open it are ongoing, the InfoCenter says.