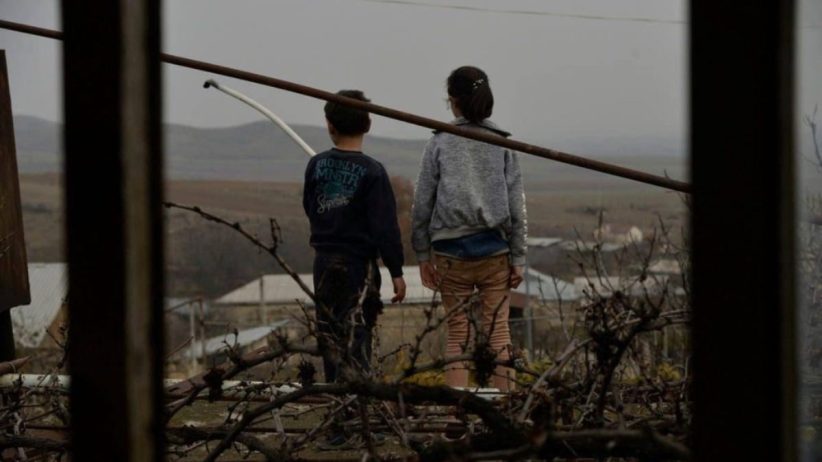 Karabakh’s (Artsakh’s) state-run InfoCenter reported Tuesday evening that Azerbaijan had cut the region’s natural gas supply, as Russia confirmed that negotiations to reopen the only road connecting the region with Armenia remain ongoing.

“Some time ago, Azerbaijan suspended the gas supply to the Republic of Artsakh,” the InfoCenter said. “The suspension of the gas supply under such weather conditions is in act of humanitarian and economic terrorism.”

The weather in Stepanakert is forecast to dip to around 36 degrees Fahrenheit overnight Tuesday into Wednesday.

The sole pipeline supplying gas to Karabakh runs from Armenia through territories ceded to Azerbaijan at the end of the 2020 war. Karabakh experienced dayslong gas outages in March that it blamed on Azerbaijan.

A group of Azerbaijanis in civilian clothing began blocking the Goris-Stepanakert highway Monday morning, effectively cutting off Karabakh’s Armenians from the outside world. It already marks the longest stretch of time the road has been closed since the end of the 2020 war, which saw Russian peacekeepers take control of the route.

The Azerbaijanis presented themselves as environmental activists and demanded a meeting with Andrey Volkov, the commander of the Russian peacekeepers in Karabakh.

As a result of the blockade, around 1,100 people, including 270 children, have been left stranded on the highway in freezing winter weather, according to Gegham Stepanyan, Karabakh’s Human Rights Defender. About 200 of them spent Monday night in guesthouses in the southern Armenian town of Goris, while others stayed with their vehicles on the road.

In response to Tuesday’s gas cut, Karabakh’s Education Ministry announced that classes would be suspended Wednesday in all schools using gas for heating, while schools using wood or electricity for heating would remain open. It was not immediately clear how many students would be impacted.

The school closures come amid growing concern over a mounting humanitarian crisis in Karabakh, as Azerbaijan’s blockade of the only road connecting the region with Armenia entered into its second day Tuesday.

Karabakh’s Health Ministry issued a statement confirming that patients in critical condition cannot be transferred to better-equipped hospitals in Armenia due to the closure of the Goris-Stepanakert highway.

The director of the Stepanakert Republican Medical Center, Mher Musaelyan, told CivilNet that hospitals in Karabakh will begin facing severe shortages of critical medicine in a matter of days if the blockade remains in place.

Meanwhile, negotiations to reopen the road continue, the Russian peacekeeping mission in Karabakh said in their daily bulletin Tuesday evening.

The peacekeepers noted that road “has been blocked by the Azerbaijani side,” hitting back at remarks earlier in the day by Hikmet Hajiyev, a senior foreign policy advisor to Azerbaijani President Ilham Aliyev, who falsely claimed that the highway “was closed not by Azerbaijani protesters, but by the peacekeeping contingent of the Russian Federation.”

Armenian Deputy Foreign Minister Vahe Gevorgyan told Radio Azatutyun, RFE/RL’s Armenian service, that the authorities in Karabakh are also involved in the negotiations, but that Armenian officials are not taking part.

The developments have prompted swift and vociferous condemnation in Stepanakert and Yerevan, with officials in both cities accusing Baku of attempting to carry out ethnic cleansing in Karabakh. Armenian Prime Minister Nikol Pashinyan called the Goris-Stepanakert highway a “genocide prevention corridor” on Monday.

The blockade marks the second time that Azerbaijanis have closed the Goris-Stepanakert highway in as many weeks. Earlier this month, a group of staffers at Azerbaijan’s ecology and economy ministries and employees at the state-owned AzerGold mining company blocked the highway for several hours. They said they wanted to investigate “illegal” mining in Karabakh.

The repeated closures of the Goris-Stepanakert highway come amid a notable spike in rhetoric from Baku around the issue of Karabakh’s mining industry.

Hours later, a group of Azerbaijanis attempted to enter the premises of two mining operations in Karabakh, called Drmbon and Kashen, but they were blocked by mine employees and residents of nearby villages.

The authorities in Stepanakert said they had not been given advance warning of the Azerbaijanis’ attempted visits to the mines.

The next day, a spokesperson for Azerbaijan’s Foreign Ministry said Baku had sent Moscow a diplomatic protest note calling on the peacekeepers to ensure unhindered access to mines in Karabakh.