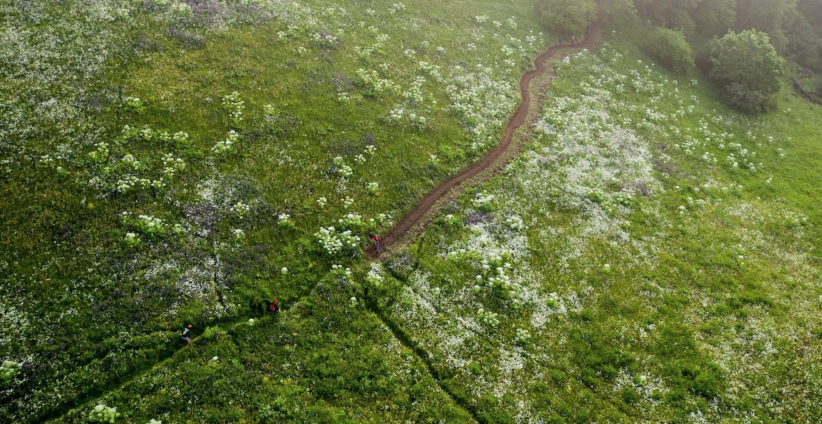 Firstly, we open with a quickly developing story which has very serious ramifications. Azerbaijanis who claim to be “environmental activists”, have staged a sit-in protest on the road outside Shushi, blocking all access in and out of the enclave. Almost nobody actually believes their claim, and in fact many have already been shown to have connections to the Azerbaijani military. Azerbaijani special forces have also appeared at the site to support the “protesters” and the crowd has been attempting to provoke the peacekeepers and have made racist statements against Armenians. David Ignatius of the Washington Post tweeted about a conversation he just had with Ruben Vardanyan on the situation:

The Armenian population is completely cut off, and to ratchet up the pressure the Azerbaijanis have cut off gas access as well just like they did last winter. Reports from those monitoring Azerbaijani-language social media state that their reaction has been celebratory and extremely toxic. Those maintaining the ruse have adopted ecological virtual signaling into their typical rhetoric about taking Stepanakert:

The Deputy Chairman of the Youth Wing of Aliyev’s party makes it clear this is not about ecology but subjugation:

Even this “civil society” tweeter makes it clear that this closure rather than being about environmentalism is actually about vilifying and intimidating Armenians:

There are some Azerbaijani voices who have been mocking the spectacle and calling it for what it is, but even those who slightly question what the government is doing are attacked. One has described the hatred on display on Azerbaijan-language social media channels as even worse than during the 2020 war. Nevertheless, some continue to point out the hypocrisy:

The talking point which is quickly forming is that it is not Azerbaijani protesters blockading Armenians but the Russian peacekeepers doing it, but of course they had to intervene because the Special Forces-turned-Protesters were attempting to march on Stepanakert, a very fraught moment which could result in a pogrom:

Analyst Tigran Grigoryan tweeted that while Armenians worldwide are extremely worried about their compatriots, those affected are remaining calm and not giving in to the panic this is meant to create. Still, it has been an extremely emotional story to cover.

Now to the stories from the past few weeks:

In a revelation which came as no surprise to Armenians around the world, a feature story in the Washington Post detailed how two US Air Force Generals, Duncan McNabb and William Frasier III, attempted to “cash in on their Azerbaijani connections” via consulting deals with the Aliyev regime-associated Silk Way Airlines. The Airlines, which is believed to have transported weapons to launch the 2020 Karabakh War, offered in one case a contract worth $5000 a day. The article details through FOIA releases how an Air Force lawyer at the Pentagon Philip Deavel intervened to prevent the deals as they were potentially “embarrassing” and a “threat to national security”. This is just the latest story of corruption and dirty money involved in Azerbaijan’s international outreach, and is a reminder of what Armenians are up against in light of the many “western experts” who accept money from Azerbaijan to launder its propaganda as actual analysis.

One of many relevant ongoing examples of this is that of Angele Kedaitiene, a former European Commission officer whose Twitter bio still claims her to be an “EU civil servant”. In this tweet, in which she seems to speak not only as a EU official but on behalf of other ones, she threatens to stop EU support to Armenia and accuses it as terrorism. Needless to say with the EU attempting to mediate the Karabakh conflict, such wild claims are not helpful, but also the fact that on her website she is quite blatantly selling meetings with EU officials. It is clear her services have been purchased by Azerbaijan, which has taken her on multiple propaganda junkets, but her insistence on masquerading as an EU official would make for blatant ethical and likely illegal conflicts of interest. Just add her to the list of officials on the Azerbaijani payroll to provide it with international cover.

One of the reasons why this international cover is needed is due to the many cases of war crimes and cultural heritage destruction which compromises Azerbaijan’s international reputation. This Russian language report from the BBC (English translation forthcoming) verified the horrific video from the September 13 invasion in which multiple Armenian soldiers are seen executed by Azerbaijani forces. This video was previously verified by BellingCat as well. It is worth noting that in a recent Senate hearing, the OSCE Minsk Group American Co-Chair Philip Reeker conceded that while he has been sent such videos of Azerbaijani war crimes numerous times, the US government has not done anything to investigate them, presumably to avoid upsetting Azerbaijan. Yet another example of what we’re up against.

Armenia meanwhile has been in the international eye for a much more positive reason. Yerevan’s Republic Square held a grand ceremony both to open the Christmas season with a tree lighting but also to officially open its hosting of the Junior Eurovision song contest. Yerevan went all out with an extremely impressive display, though it wasn’t without controversy, as evidence appeared on social media claiming that the decorations which blanketed the square’s buildings caused damage to their facades. Others had mixed feelings about such a spectacular celebration at what has been a difficult time for Armenia, but many agreed the event was invigorating and uplifting as well.

Armenia was the host of this year’s Junior Eurovision since its representative Maléna won last year. This year’s competitor – Nare – also impressed with her performance and came in a close second to France. Couple this with the success of Rosa Linn from this year’s adult version, and Armenia has truly been riding high in the world of Eurovision.

The sentiment from Eurovision fans and attendees was widely positive, with many extremely impressed by the professionalism of the show Armenia put on. Here’s a few of the reactions:

Here’s a few examples of major institutions which have tweeted about things Armenian lately:

Armenian social media was warmed to see this embrace of their culture by the Japanese Ambassador (one of many examples from him!):

And it was stunned to learn about Erevan in Benin!