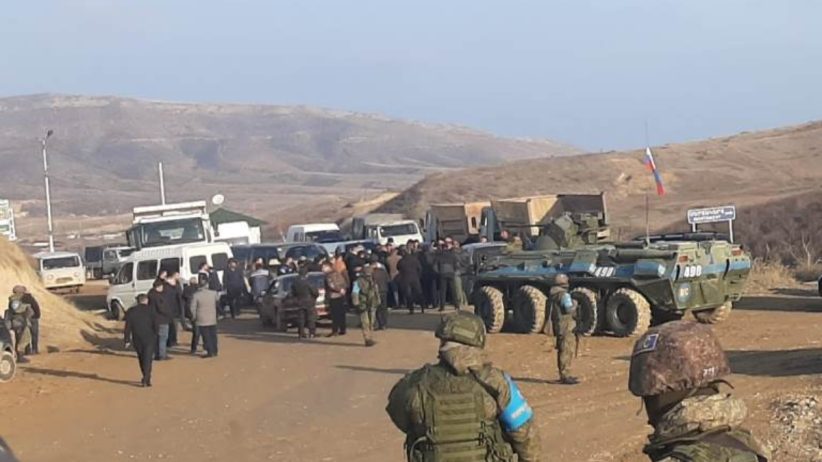 One of the main demands of the Azerbaijanis posing as environmentalists who have blocked the only road connecting Artsakh with the outside world is gaining access for their specialists to Karabakh’s mines.

On December 10, a group of Azerbaijanis tried to enter the premises of the Kashen mine in northern Artsakh, but eventually they had to leave after the mine’s security guards, alongside residents of nearby villages, stopped them from entering. On the next day, December 11, Azerbaijan’s Foreign Ministry sent a diplomatic note to Russia, demanding that Moscow “abide by the agreements reached earlier and guarantee Azerbaijani specialists’ access to the mines.”

On the morning of December 12, Azerbaijani “environmentalists” began blocking the Lachin corridor, demanding that the Russian peacekeepers grant their experts access to Karabakh’s mines.

How has Artsakh reacted to this so far?

On December 14, in an interview with Radio Azatutyun, Artsakh State Minister Ruben Vardanyan said that the Russian side had previously warned that the Azerbaijanis would visit the Drmbon and Kashen mines.

“They had warned us about this. We just had the impression that it would happen through an official letter and that it would be organized differently. The Azerbaijani side violated the agreements that we believed we had reached earlier with the Russian side,” Vardanyan said.

On December 12, Vardanyan announced that Nagorno-Karabakh was ready to discuss environmental issues and invite a group of foreign experts, including Azerbaijani environmentalists, to the region.

On December 14, in an interview with TV Rain, Vardanyan confirmed Nagorno-Karabakh’s readiness to ensure the access to the mines for independent international experts.

“We believe that every environmental problem is important, and we are ready to discuss and find solutions so that we and our neighbors benefit from them. And I think that the involvement of international experts, environmentalists and the Armenian side will contribute to the best solution to this issue,” Vardanyan said.

Vardanyan, however, added that the Azerbaijani side was not willing to communicate with Armenians in any way.

Artsakh does not oppose joint discussions

It is worth noting that there is already a precedent for contacts and even meetings between representatives from Stepanakert and Baku on environmental issues.

For example, on August 24, Artsakh’s InfoCenter confirmed news in the Azerbaijani press that employees of the Azerbaijani company Melioration and Water Management visited the Sarsang reservoir in Karabakh together with the representatives from Artsakh.

“Through the mediation of the Russian peacekeeping troops stationed in Artsakh, the representatives of the Water Committee of the Artsakh Republic have been communicating with the Azerbaijani side since 2021 and making periodic visits to the areas under the control of Azerbaijan, as well as to several other districts inside of the Republic (including Stepanakert), to reach mutual agreements on the use of drinking and irrigation water and to solve problems,” the InfoCenter said, adding that another meeting in this field was organized near the Sarsang reservoir to discuss the issue of mutually beneficial use of Sarsang’s waters.

Thus, the government of Artsakh does not prohibit Azerbaijani specialists from entering the mines, but rather it demands that both Armenian and international specialists participate in it. Moreover, in the past two years, Azerbaijani and Armenian specialists have held joint discussions and meetings, which have been confirmed by both sides.

Azerbaijan started speaking up about environmental issues in Artsakh in the beginning of December. On December 3, about two dozen Azerbaijanis blocked the Stepanakert-Goris road citing “environmental problems,” but three hours later, the road was reopened following negotiations.

On December 10, the Azerbaijani government announced that, following negotiations with the commanders of the Russian peacekeeping troops stationed in Karabakh, Azerbaijan would commence inspections that very day at the Drmbon and Kashen mines located in the Martakert region.

On December 12, hundreds of Azerbaijanis blocked the Lachin corridor, demanding an end to “eco-terrorism” in Karabakh, the “illegal use” of natural resources and the exploitation of mines.

CivilNet reported a few days ago that the Azerbaijani government recently sold an operating license for the Kashen mine to Anglo Asian Mining, a British company.