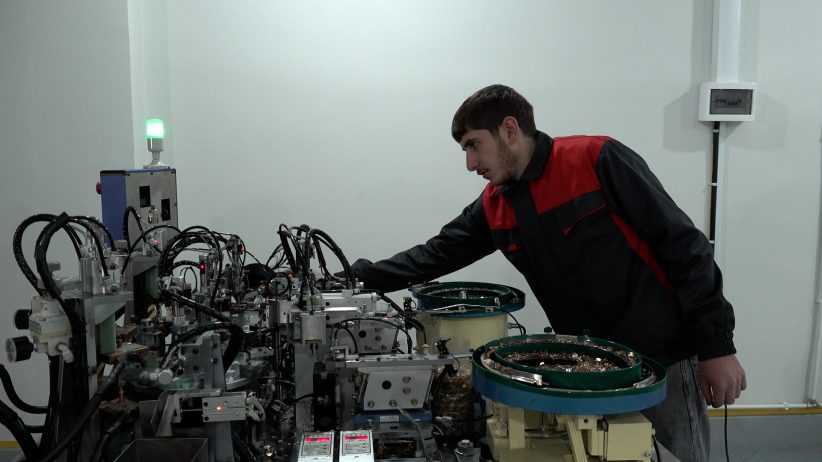 When you turn on an electric kettle, how does it know to automatically switch off when the water reaches a boil? The kettle knows because of a small, specialized device called a bimetallic thermostat that can measure temperatures with a high degree of precision, even in extreme conditions.

In 2006, the company has decided to expand into European market, where it quickly grew once again, it became one of the leaders in the field of supplying bimetallic thermostats.

“Currently we supply to over 50 countries, over, I would say, close to 600 companies in different fields, from household appliances all the way to aerospace,” Tumanyan said.

Tumanyan added that Thermorex hopes to grow further, and put Armenia on the map when it comes to these kinds of devices.

Thermorex exports to companies around the world, from the United States and Canada to Japan and China, and dozens of other countries in between. But the majority of Thermorex’s supply goes to Europe.

Currently, Thermorex supplies to most of Europe, to all of Western Europe, from the United Kingdom all the way to Portugal, Germany, Sweden, Finland and others. The biggest market share in Europe is Germany and Italy. Those are the two main export countries for the company.

“So at the moment, we are fully certified by highest certification institutions in Europe like German VD, or, for example, let’s say, UL, in United States and Canada, and so on. So there is a possibility to enter European market. Of course, it has its own difficulties, each country in Europe, in its turn, has its own difficulties. But I wouldn’t say there is much red tape as compared to other countries in other places of the world,” Tumanyan explained.

Serj says one thing that has been critical to Thermorex’s success has been support from the German Business Association in Armenia, part of Germany’s worldwide network of chambers of commerce. He explains that the Association has helped facilitate visas for Thermorex staff to visit the European Union and provide hands-on assistance to clients.

“Thermorex has been a member of German Business Association in Armenia for a long time, for the last, I would say maybe 7, 8 years or so. And we did get a lot of support. There is always a need for our engineers, for our marketing and sales department people to maybe always go there, you know, to Germany. Unfortunately, we still have a visa, you know, with European Union, the Schengen area, but in that field, we did get a lot of support,” Tumanyan said.

Thanks to Thermorex’s success exporting to Europe and around the world, the company has been able to provide hundreds of people in Armenia with employment, and plans are in the works to expand further.

“Currently, we have about 250 employees, full time employees, the company also has automated production lines, and for us to expand is not an issue. As you can see, we have plenty of space in this building. We have few floors that we can still expand to and on which we are planning to do. We export 100% of our products. We are proud that we are manufacturing in Armenia and supplying to the world,” Tumanyan told CivilNet.

Tumanyan believes that Thermorex can compete with pretty much anybody in the world. Already, they compete with European manufacturers, with whom they have similar or better pricing and quality levels. The company now stands as a success story of Armenian entrepreneurship.

3,400 people lose jobs in Karabakh due to Azerbaijan’s blockade