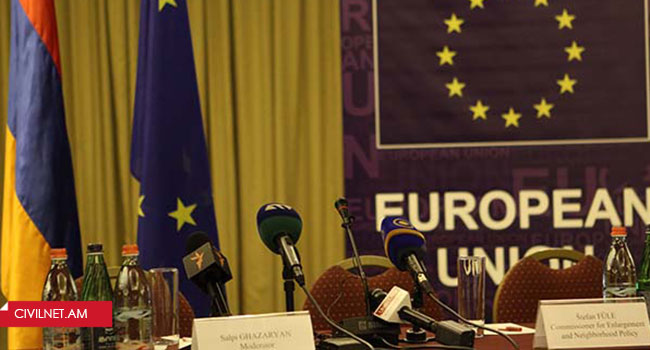 This move comes just weeks after Armenian authorities had spent four years negotiating and concluding Armenia’s membership in the European Union Association Agreement which  is a treaty between the European Union (EU) and a non-EU country that creates a framework for co-operation between them in such areas as political, social, cultural and security links, and most importantly trade.

The EU had said throughout the negotiation period that the Russian Customs Union is not compatible with the letter and spirit of the Association Agreement, and therefore if Armenia were to join the Russian Union it could not join the European Association Agreement. The Association Agreement with the EU was scheduled to be initialed in the Lithuanian capital, Vilnius, at the end of November of this year. Lithuania currently holds the EU presidency and the Vilnius Summit was to be the opportunity for Georgia, Armenia and Moldova to initial, and for Ukraine to sign the document.

Although several recent actions undertaken by Russia had raised serious concerns that Russian pressure could complicate the European integration process for Armenia, the loud, clear unambiguous announcement by Serzh Sargsyan in Moscow came in stark contrast to the Armenian government’s words and actions of the last four years.

The long period of negotiations over the Association Agreement, the frequent visits of high-level European officials took place in the context of Russia’s sale of weapons to Azerbaijan and a dramatic increase in Russian natural gas prices to Armenia, Yerevan’s historic and traditional “strategic partner.” This left Armenians and the international community wondering how the Armenian leadership would navigate through this historic moment.

Since Armenia’s membership in the Council of Europe in 2000, Armenia’s trade and political relations with Europe have deepened. Today, the European Union and its member states are Armenia’s biggest trading partner. While trade with Russia in the first half of 2013 comprised 22 percent of Armenia’s total trade, trade with EU member states was 29 percent of the total. In comparison to 2012 figures, this represents a 2.1 percent growth for the EU, but a 0.1 percent growth with Russia.

Together with a bigger trade relationship with Europe, it is the European institutions — the Council of Europe, the European Union Council and Commission and Parliament — that provide the greatest oversight and persuasion of Armenia’s democratization processes. Nevertheless, the fact of historically long and deep Russia-Armenia relations continues to be seen alternatively, or even simultaneously, as default security, and as an unshakable albatross.

Still, the announcement on Tuesday by Sargsyan at a joint press conference in Moscow with Putin sent shockwaves throughout Armenia. The announcement, which came late in the evening Yerevan time, was first kicked around in online media and Facebook. The reactions can be grouped in three categories.

The first and most frequently heard response was ‘Back to the USSR.’  This move was seen as final refutation of the European promise, with no pretense. The EU laws that Armenia, Georgia, Moldova and Ukraine would be committing to implement by acceding to the Association Agreement amount to the majority of the EU acquis – the EU’s treaties, directives, regulations, declarations, resolutions and the judgments of the European Court of Justice. Thus, by acceding to the Association Agreement, de facto, Armenia would have taken to the gradual adoption and implementation of the EU regulations, norms and standards, with European institutions offering oversight. In other words, Armenia would have moved closer to  Europe either smilingly, or kicking and screaming. That option is now off the table.

Many questioned how it’s possible to choose the Russian-led Customs Union — a non-existent entity, still a concept — over the tried and tested European model which is available in detail in a 1,000 plus page document.  Others asked about the selection of an economic model itself — the still-controlled markets of the CIS vs the free markets of Europe. A few wondered about individual, personal economic gain by those in political and economic power, as a consequence of this choice.

The second category of response deals with process. After four years of publicly acknowledging negotiations with the European Union, with constant reassurances from the Armenian government that the Vilnius initialing is the desired direction, an overnight announcement to the contrary was hard to understand. There continues to be understanding about the Russian factor, Russian pressure, Russian blackmail some called it, still the lack of public debate has led to a further decline in confidence regarding the administration’s policies. “Clearly, this administration has no right to venture into foreign policy,” one commentator said. Another said, the Russian pressure factor is not new in Armenian history, why was that not factored in and dealt with earlier and throughout the process. Among those upset by the misleading process are those news outlets who had not simply believed the administration’s European intentions, but also were encouraged to defend them.

A different version of this same reaction turned the issue into a domestic one questioning the legitimacy of the president, given the doubts raised over the presidential election just six months ago, and questioning therefore his right to negotiate on behalf of Armenia and Armenians. An underlying fear among those who understand the foreign policy community is that this is not going to be viewed as a single, one-off decision, but that Armenia’s credibility has been severely weakened, since Armenia has been less than transparent in its dealings with both parties — Russia and the EU.  The question being asked is ‘why was this allowed to happen,’ why was each led to believe something different? It appears as if those implementing Armenia’s foreign policy, the president chief among them, sent wrong signals and followed them by unexpected actions.

Finally, there are two kinds of responses even among those who have taken the long view. There are those who insist that this process is far from over, that there still needs to be a document, the document must be ratified by the Parliament, and that the Constitutional Court must give its approbation.  Therefore, they say, there is plenty of opportunity for public input, protest, etc.  These comments stand in stark contrast to others who, also looking into the future, are fearing how Armenia will be viewed or treated in various international forums, conferences, ministries and organizations. We will be perceived as another Belarus, not serious about bilateral relations in Europe, or democratization, or any of the processes that matter.

These were the Armenian reactions. The reactions of the international community, European officials in particular, ranged from the cautious to the dismissive. “We’ll wait to hear the president’s explanations,” some said. Sweden’s foreign minister summarized it in a tweet: Armenia chose the Kremlin over Brussels.