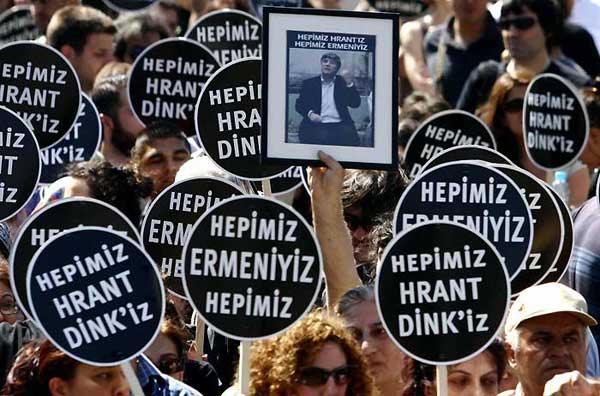 On September 17, 2013, the trial reopened at the 14th High Criminal Court in Istanbul — the city’s largest courthouse — of the men accused of the killing of Hrant Dink, founder and editor-in-chief of the “Agos” weekly. Meanwhile the Friends of Hrant Dink gathered outside the courthouse chanting slogans like “the murderer state will give account” and “we are all Hrant, we are all Armenians”.

On January 19, 2007, Hrant Dink was shot dead in front of his Agos weekly office in Istanbul by 17-year old Ogün Samast.
The Dink family’s lawyers, Fethiye Çetin, Hakan Bakırcıoğlu, İsmail Cem Halavurt and Bahri Belen, were present in the courtroom, along with deputies from two parliamentary opposition parties, the BDP and CHP.

In a letter posted on the Agos website, the Dink family stated that they will boycott the trial.

They said “We, the Dink family, will not attend the hearings in the murder trial which is beginning again and will not be exploited by a game of the state machinery which mocks us.”
The statement continues: “the crime coalition that is called the state re-committed the murder at every hearing, every day, while it presented itself as seeking justice. That coalition itself is the crime gang that planned the murder and then covered it up.”
The Dinks’ protest of the trial has represented to some Turks that the family has given up on the justice system in Turkey.

Civilnet spoke to Fethiye Cetin about the reopening of the case. Speaking about the court, she said  “they want to continue this trial with these five people. The criminal organization as defined by the Court of Cassation is composed of only Yasin Hayal and his friends. They claim that this organization decided to kill Hrant Dink and they committed this crime.”

The organization’s legal status has changed twice during the first two trials. Yasin Hayal, who ordered the killer Ogun Samast, was acquitted earlier this year of being the leader of a terrorist organization, but was instead found guilty of founding and leading a criminal organization.

The “organization” was not defined as a terrorist organization because it was not harming public order or the state, but Dink specifically. The Dink lawyers want to prove the opposite.

Eighteen suspects were charged when the trial began. Fethiye Cetin noted further that “since that day, we have always said that the 18 accused were not the only persons  behind this crime, and we need to find out who were the forces behind it. All our efforts were focused on this, and six years have passed. Where are we now,, after six and a  half years? I can state openly that we are no further forward than we were at the beginning.”

Last week, a warrant was issued for the arrest of Erhan Tuncel, an informant for the Trabzon Police Department. He was acquitted of all charges in the latest ruling by the Supreme Court of Appeals despite claims that he was the one who ordered Yasin Hayal to murder Hrant Dink.

Defendant Yasin Hayal said  “We have a witness saying he has a tape where he is saying that he is going to commit the crime with Erhan Tuncel and flee  to Russia. This is the proof that I (Hayal) am innocent,” he said.

The involvement of the Trabzon police and the promotion of persons in the alleged “murder mechanism” and “criminal alliances” has upset the Dink family, who therefore decided not to attend any future hearings. The Dink family affirmed in a pre-trial statement published in Agos weekly that “the crime coalition that is called the state re-committed the murder at every hearing, every day, while it presented itself as seeking justice. That coalition itself is the crime gang that planned the murder and then covered it up.”

The Hrant Dink assassination is linked to the killing of Priest Andrea Santoro in Trabzon in 2006 and the murder of three Christian missionaries in Malatya in 2007.
According to Erdal Doğan, a former lawyer of the Dink case, who is now working on the missionaries’  killing, the two cases are interrelated, and “once the Zirve Publishing House trial is solved, a picture of Turkey’s past 60 years will appear.” The missionaries were tied up and tortured before being killed at the Malatya Zirve publishing house.

In response to the misinformation and censorship of the authorities, Fethiye Cetin recently published a book about the case “Utanç Duyuyorum: Hrant Dink Cinayeti Yargısı” (I Feel Ashamed: The Judgment of the Hrant Dink Murder). The book’s major premise is that the MİT(National Intelligence Organization) issued the order to kill Dink via an encrypted message in Cyrillic.

“We, as lawyers, will try all legal avenues, and if we don’t get a result from this court, we will take this case to international courts,” Fethiye Cetin told Civilnet.

The case was adjourned until December 3.