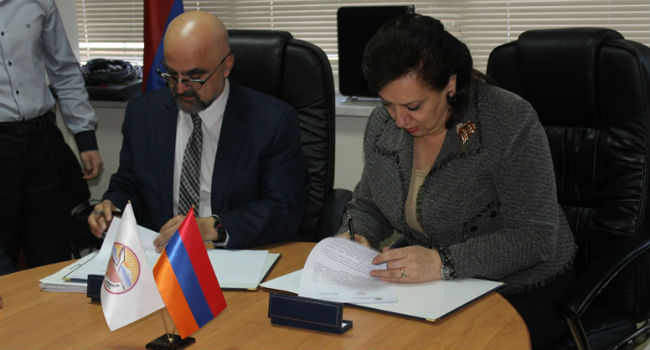 An institute for the study of Western Armenian will be established in Armenia according to a  cooperation agreement signed between Hranush Hakobyan, Armenia’s Minister of Diaspora and Razmik Panossian, the Director of Calouste Gulbenkian Foundation’s Armenian Communities Department on October 28 in Yerevan.

During the signing ceremony, Minister Hakobyan praised the initiative of the Gulbenkian Foundation and in particular Razmik Panossian, the Director of the Armenian Communities Department of the foundation to work toward the preservation and advancement of Western Armenian. She explained that since his appointment over a year ago, Panossian traveled to several Diaspora communities around the world to understand the needs and challenges and then presented his findings to the leadership of the Foundation.

According to a Diaspora Ministry press release, Hakobyan said: “As a minister, I  am grateful to the Calouste Gulbenkian Foundation, for organizing activities in a productive way in the Armenian Diaspora reality. They are also realizing productive programs in Armenia with different institutions including the Matenadaran, the Academy of Sciences, and Yerevan State University. The main objective of the Foundation is to develop Armenian studies. The main thrust is on the development of Western Armenian language.”

Can Armenia Close the Gender Gap?