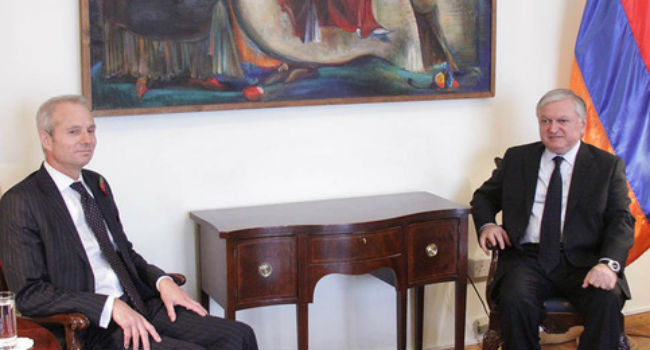 Before arriving in Armenia for an official visit, David Lidington, a Member of the UK Parliament and State Minister for Europe tweeted that he was transiting from Kiev to Armenia and Azerbaijan and added, “Important UK interest in stability in Caucasus/Caspian region.”

During his visit, Mr. Lidington met with Foreign Affairs Minister Edward Nalbandian on November 3, who stressed the importance of developing further bilateral and multilateral relations with the United Kingdom. Nalbandian said that political cooperation has increased over the last number of years and that he was confident that “this trend will continue.”

Diplomatic relations between the Republic of Armenia and the United Kingdom were established on January, 20, 1992 and since then, there have been a number of visits between high-ranking officials of the two countries. However, the last time a State Minister from the UK came to Armenia was in 2006, when Geoff Hoon, who was State Minister for Europe at the time made an official visit.

Following his meeting with Nalbandian, Lidington said that the UK government considers Armenia an important partner and that the purpose of his trip was to provide new impetus to cooperation with Armenia. Nalbandian noted that there has been a remarkable growth of British business interest in developing trade and economic ties with Armenia. It is important to note that UK investments in Azerbaijan far outweigh their investments in Armenia and this is conditioned by British oil companies, which are heavily invested in Azerbaijan’s energy sector.

Regarding the Nagorno Karabakh conflict, Lidington reiterated that the UK fully supports the OSCE Minsk Group format for the peaceful resolution of the conflict. Following his meeting with Nalbandian, Lidington tweeted: “Thank you to FM Nalbandian and MFA of Armenia for warm welcome and important discussion of Armenia’s role in the region.”

Earlier in the day, Lidington paid a visit to the Armenian Genocide Memorial, after which he tweeted: “Just paid my respects at Tsitsernakaberd Memorial, remembering upcoming centenary of 1915 and its importance for all Armenians.” Regarding the UK’s position on the international recognition of the Armenian Genocide, it is worth noting that Geoffrey Robertson, a world renowned British expert on international law whose newly published book, “An Inconvenient Genocide: Who Now Remembers the Armenians,” meticulously documents the events of the Genocide. Robertson also wrote a report back in 2009 entitled, “Was there an Armenian Genocide?” exposing the UK government’s position of denial about the Genocide. Following Robertson’s report, the Foreign Office began slightly changing its policy resulting from the legal arguments postulated by Robertson.

CivilNet will be conducting an interview with Geoffrey Robertson on November 18, 2014.