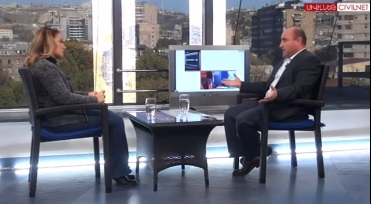 Did Charles Aznavour give an interview to the Turkish Posta newspaper or not? According to the paper, he did, but according to Armenia’s Ministry of Foreign Affairs, no such interview took place and he didn’t receive any award as had been stated in the article. CivilNet’s Aline Ozinian spoke with Tatul Hakobyan on November 5 about the controversy surrounding the contents of that interview where Aznavour made several contentious remarks about Armenia.

Following this interview, CivilNet contacted Posta to confirm the veracity of the piece. The Producer  Erkan Ozerman sent CivilNet exclusive photos from the controversial meeting which confirm that it had taken place and that Aznavour had allegedly received a prize. The author of the article, did admit that the contents of the interview were extracted from previous interviews that Aznavour had given to other publications and based on the conversation he had with his interlocutors, including Turkey’s ambassador to France, during a dinner. On November 6 Tigran Balayan, MFA spokesperson tweeted that a souvenir given to Aznavour was presented as a prize by the Turkish newspaper.

Alin Ozinian: Tatul, today there was some very important news. The Turkish Posta newspaper, considered to be yellow press, published an interview with Charles Aznavour. The publication stated that the interview took place during a working dinner with Aznavour, after which the journalist prepared the piece. A few minutes ago we were informed that the Armenian Ministry of Foreign Affairs stated that no such interview took place.

Tatul Hakobyan: What do they deny? That an interview has not taken place but the meeting has?

AO: There is nothing about the meeting, it only states that Charles Aznavour has not given an interview. How should this be interpreted?

TH: Alin, if the word “Turkish” was not involved, we could have a much freer conversation. But since the interview was given or perhaps not given, I don’t know what word to use to a Turkish newspaper, when we take a look at Aznavour’s interviews of the last one or two years, they are within the scope presented in this particular interview or a pseudo interview by Posta daily. So there is not much to deny here. The important thing is – the ideas that Ambassador Aznavour has expressed before, regarding Armenian-Turkish relations, the Armenian Genocide, the future, are included in this interview which in fact is denied by the Ministry of Foreign Affairs of Armenia.

AO: Tatul, in the beginning of the interview Erkan Ozar Man who is a famous producer in Turkey explains how the interview took place. He says that for a long time he has wanted to conduct an interview with Charles Aznavour, but as it didn’t work out, he decided he could invite the Turkish ambassador and Charles Aznavour to a dinner, and turn those conversations into an interview. There are photos in the article, although we do not exclude they could be photoshopped, and besides we are rather aware of the Turkish reporters’ tendency to distort things. However, as it appears, the meeting has taken place.  What do you think, should an ambassador inform Armenia about meeting with a Turkish ambassador or an official?

TH:  I think that Armenian and Turkish diplomats have had many instances of meetings since 1991. I do not exclude the fact that they might have dined, even said a toast. I don’t exclude any of this. The strange thing for me is that Ambassador Aznavour meets with the Turkish Ambassador, and that famous person you mentioned is also present at the meeting. Here lies the problem. This means the Turks pursued another goal by this meeting. But, I repeat, at this point we really don’t know what the Foreign Ministry is denying. Does the Ministry deny the interview?

TH:  Very well, then is it possible that whatever was presented as an interview was in a form of a conversation? What part of the conversation was misinterpreted by the Turks? One matter I adhere to and I say this out of my own experience, that I as a reporter, be it in Turkey or here in Armenia, do not give an interview to any Turkish journalist, being aware that they are masters of distortion and misrepresentation. And they will twist the interview to correspond with the Turkish political agenda. They do not care about what will happen to you later. And with this in mind, I always stress that one has to be careful about giving interviews to Turks. Especially when it comes to the ambassadors. But I repeat, there are much more important issues here and it would have been better that the Foreign Ministry denied all this in a more precise manner, rather than just writing a status on their Facebook page or Twitter page, leaving much room for speculations, doubts etc etc.

AO:  Even in Posta Daily there was the news that he was presented with Golden Maple Award in Turkey, and he has been photographed holding the Award in his hands. Even though that might be a photoshop as well, we do not know, and the Foreign Ministry says nothing about that either.  Tatul, as an experienced reporter in the media, what do you think, is the Facebook status [by the MFA] enough?

TH: I think that this is not the moment and Armenia-Turkey diplomatic relations can not afford themselves to publish a denial in Turkish press, especially in such press as Posta. If it were an important and trustworthy media, doing it would make sense. To me it’s more important that Armenia’s Foreign Ministry and Charles Aznavour precisely deny it and give a detailed explanation. First, was there such a meeting or wasn’t? If there was, why was the Turkish producer present? Why was he there?

AO: Well, maybe because the ambassador is also a singer, and the producer was his acquaintance.

TH: In that case they shouldn’t say “Ambassador Aznavour.” I don’t see any problem  if any singer living abroad, even an Armenia-based singer goes and dines with the Turkish ambassador.  It’s their own business, their taste, their problem. Today we are not discussing the world-famous, beloved singer Charles Aznavour but we are discussing the actions of an ambassador who represents Armenia’s diplomacy in an important country. This is what we’re talking about. And this is what the Foreign Ministry should be accountable for and present in detail to the public – which part is wrong, which is right, which is distorted, which part corresponds with reality etc etc. But there is a big “but” here. I repeat, I do not trust the Turkish press. However, when you read that interview in Posta, putting aside whether it has taken place or not, whether it was on the record or off the record, and when you compare Aznavour’s interviews of recent months and years about the same topics to the Russian, French, Swiss, French-Armenian press, we notice that there is a clear line and that line is preserved in this interview to Posta. That is what is more important to me.

AO: Tatul, as you said, during this interview Aznavour brings forward the idea that he’s Aznavour and he is not accountable to Armenia.

TH:  I think this also has to be verified, and we need to know whether or not he has said such a thing. Considering his previous interviews, it is possible that he said it. But I don’t want to act as a defender of the Turkish point of view here. It is much more important for me that the Armenian side provide clear-cut clarifications, because when you don’t give clarifications and throw a sentence in Facebook or Twitter, you give ground for more doubts and contemplations and speculations etc. But I think that Charles Aznavour in his recent interviews, as a diplomat, as one of the diplomats of Armenia, has long stepped over the red lines. That is, regardless of this last interview, he says things that do not fit within the scope of simple diplomatic ethics. Although I agree with him in certain things as a citizen, for example when he says there are thieves and robbers here in the government, robbing people. I find it true and very honest, but if weightlifter Yuri Vardanyan, Armenia’s ambassador to Georgia says such things, what would happen to him? The problem lies here, when there is no border between the diplomacy and singing, diplomacy and sport.

AO: Tatul, as a last question. As Charles Aznavour is an artist, already 90 years old and unpredictable, if today he announces that he has had the meeting and has said all those things, what will happen? How will the international media interpret all this?

TH: Nothing will happen. Nothing. It will in fact be a scandal, scandalous. But nothing will happen I think, because Charles Aznavour is an important person for the ruling powers of the Republic of Armenia, and we have had such fiascos in  the diplomatic field in recent years. So this time around, it’s Aznavour at the heart of the storm. And the possible PR benefits that the Armenia’s ruling power would receive through Charles Aznavour would be much more important than calling Aznavour back. But where would they call him back?

AO: Since he’s not here.

TH: Our beloved singer Charles Aznavour has nothing to do with Armenia. Yes, he visits Armenia, sings and is involved in charity.

AO: But as he states, he’s French

TH: He’s French and therefore he should be left in peace so that he continues singing instead of appointing him as a diplomat in an important country for Armenia.