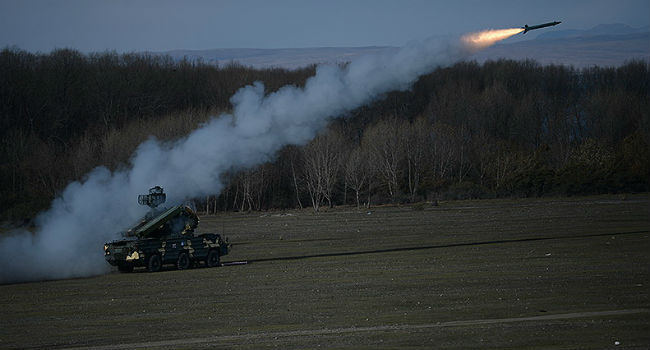 The front line is 25 kilometers from the BTC oil pipeline, which ships 800,000 b/d of Azeri crude oil.

Petrostrategies, a French think tank reviews the continuing drop of oil prices. In their weekly magazine “The World Energy” analysts of the firm consider the shooting down of an Armenian helicopter by Azerbaijan on November 12. “The front  line is 25 kilometers from the BTC oil pipeline, which ships 800,000 b/d of Azeri crude oil. But all this news did not prevent Dated Brent from slumping to $76.15/b on Thursday,” they write.

Oil market prices dipped by over $6/b last week,  despite a spate of fresh news of quite a bullish nature.  OPEC’s oil production fell by 400,000 b/d to  30.1 million b/d in October; Libya’s big Sharara and  Elephant fields resumed only partial service; a number  of US shale oil and tight oil producers (Continental,  Rosetta Resources, ConocoPhillips etc.) have announced budgetary cuts for 2015; the number of active onshore oil drilling rigs shrank to 1,568 units (-41) in the US at the beginning of  November; the IEA is forecasting a drop of around 10% in US tight oil  production in 2015 (compared with 2014), etc. Furthermore, geopolitical  tensions came to light in the Caucasus, where an Armenian helicopter was shot down by Azerbaijan on November 12, leaving three dead.  Armenia has promised to hit back with a “painful” response. The front  line is 25 kilometers from the BTC oil pipeline, which ships  800,000 b/d of Azeri crude oil. But all this news did not prevent Dated  Brent from slumping to $76.15/b on Thursday, i.e. a $6.40/b drop in  one week.

On November 12, Saudi Arabia’s Minister of Petroleum and Mineral  Resources, Ali Al-Naimi, broke several weeks of silence to deny the allegations  that his country was embarking on a “price war”. In Mexico, he stated  that the Saudi oil policy has been subjected to “a great deal of wild and inaccurate  conjecture in recent weeks”. But this policy is constant and has not  changed for a long time. “First, Saudi Arabia does not set the oil price. The  market sets the price. We do our best, with other producers, to ensure price  stability for the interests of producers, consumers and the industry at large”,  said Naimi. “Saudi Aramco prices oil according to sound marketing procedures. No  more, no less. These take into account a host of scientific and practical factors,  including the state of the market, refinery margins and long-term relationships with  customers. Talk of a price war is a sign of misunderstanding–deliberate or otherwise–  and has no basis in reality. We do not seek to  politicize oil, nor do we collude against anybody. For  us, it is a question of supply and demand. It is purely  business. We want stable oil markets and steady  prices”, said the Saudi Minister of Petroleum and  Mineral Resources.

This statement did nothing to reassure the markets,  which are obsessed by the oversupply that is appearing  on the horizon for the 1st half of 2015. If OPEC  (and/or other producers) do not lower their supply, a  surplus of at least 1.5 million b/d risks occurring. A  number of exporters are already struggling to send out  their crude oil. The market is in bad need of a benchmark  that it can latch on to. This benchmark is perhaps  $90/b, as certain Saudi sources hint at. But prices have split away from a balance  zone of $100-105/b and have embarked on a free fall, since neither OPEC nor  Riyadh have paved the way that could have ensured a smooth descent. If on  November 27, OPEC does not point towards a given direction and take action to turn  that way, the fall could get worse. The adjustment will then come from a reduction  in the production of North-American shale and tight oil: this will react, as capex and  opex merge in this expensive activity. But the effects could take some time before  they are felt at the price level. Unless between now and then geopolitical events  sway developments.