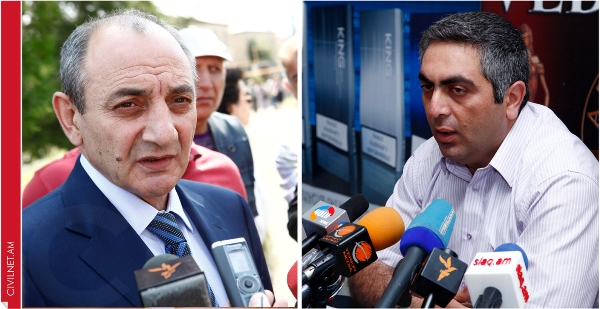 Major Sergey Sahakyan, Senior Lieutenant Sargis Nazaryan and Lieutenant Azat Sahakyan, the crew members of the NKR Air Forces Mi-24 helicopter downed during a training flight on November 12 by Azerbaijan Armed Forces were posthumously awarded the Medal for Courage by President Bako Sahakyan of the Nagorno Karabakh Republic on November 22.

Following a special military operation by the NKR Defense Army, the remains of the three pilots were retrieved. The no-man’s land where their helicopter was downed was heavily mined and under constant Azerbaijani gunfire, preventing the Armenian side from approaching the crash site.

Following the successful operation in retrieving the remains of the pilots and parts of the downed helicopter of military significance to the Armenian side, Artsrun Hovhannisyan, the spokesperson of the Armenian Defense Ministry posted the following status on his Facebook page: “Taking into consideration the adversary’s large gunfire capability, this operation by its nature and with its complexity was unprecedented. The execution was brilliant also taking into consideration the adversary’s losses who had created a trap. In the coming days we will hear the names of those who died as a result of different misfortunes.” Hovhannisyan went on to say that the special operation carried out by the NKR Defense Army was of international military standards.

The Azerbaijani Defense Ministry issued a statement refuting Armenia’s Defense Ministry announcement that it had retrieved the bodies. “The Armenian side’s reports that it has allegedly conducted a special operation in order to take the remains of the corpses from the area where a helicopter of the Armenian Armed Forces was downed on November 12 and that the Azerbaijani Armed Forces units suffered losses in this direction are totally baseless. It’s a new provocative lie spread on purpose.”

Following this announcement, Artsrun Hovhannisyan posted another status stating that the Azerbaijani Brigade Commander had been relieved of his duties because of the number of casualties his unit sustained following the special military operation by the Armenian side.

The unarmed Mi-24 helicopter of the NKR Defense Army was performing military drills near the Karabakh-Azerbaijan Line of Contact on November 12 when it was shot down by Azerbaijani armed forces killing the three pilots on board.

After almost ten days of failed negotiations with the Azerbaijani side, and after several failed attempts by the mediating OSCE Minsk Group and other international bodies and nations to ensure Baku complied with Article 15 of the Geneva Convention, the Armenian military successfully retrieved the pilots.

On November 13, a day after the helicopter was shot down, the government of Nagorno Karabakh applied to the International Committee of the Red Cross in Stepanakert asking that the organization mediate to ensure the repatriation of the bodies of the pilots. On November 18, Baku said that they would return the bodies only when they deemed it necessary.

Also on November 18, Special Representative of the OSCE Chairperson in Office, Andrzej Kasprzyk met with the leadership of the Nagorno Karabakh Republic about the incident. It was planned that Kasprzyk would be allowed to go to the helicopter crash site, however monitoring of the Line of Contact took place at a predetermined location which was 10-12 kilometers from the actual site.

During an interview on Karabakh’s public television, Kasprzyk noted that Baku was unwilling to provide security guarantees to carry out the monitoring at the crash site. Kasprzyk said that he will continue efforts to ensure this happens. On November 19, Kasprzyk met with Armenian Defense Minister Seyran Ohanyan and on November 20, the OSCE Minsk Group Co-Chairs issued another statement regarding the incident: “In the spirit of the Astrakhan statement of October 2010 between the Presidents of Armenia, Azerbaijan, and Russia, the Co-Chairs urge Azerbaijan to permit the recovery of the bodies of the victims, and Armenia to cooperate fully with all efforts to resolve this humanitarian situation.”

As special units of the Armenian military executed the military operation, Andrzej Kasprzyk was in Baku, Azerbaijan.