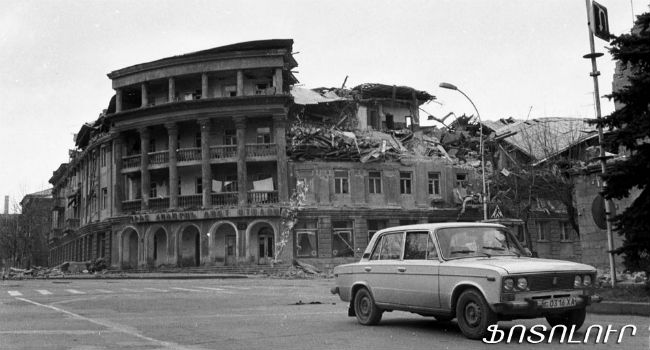 In the early morning hours of December 11, 1988, the Baku-Gyumri airline flight IL-76M crashed into the mountains and perished 15 kilometers from the Gyumri airport. Of the 69 passengers and nine crew, only one person, Azerbaijani Fahraddin Balaev survived, as he was lucky enough to be in the cab of a truck at the tail end of the airplane. This was Armenia’s worst air catastrophe, about which only a few people within and probably beyond its borders know about.

I will elaborate on the details later, but first let me explain why I’m dwelling on this incident only 26 years later. Azerbaijani CBC (Caspian Broadcasting Company) satellite television network that broadcasts primarily in Russian (it also has news broadcasts in English, Armenian and Persian), aired a film on December 11 relaying the events of the flight IL-76M catastrophe, falsifying the story from beginning to end.

Very little was written about the crash of the Baku-Gyumri flight at that time for two reasons: First, during the Soviet Union, even in 1988, not only were there very few news reports about airline disasters, but there was also a deliberate attempt to hide them from people.The second and perhaps main reason was that the crash of flight IL-76M occurred four days after the devastating December 7, 1988 earthquake and, certainly this plane crash couldn’t have attracted such attention because it was pushed to the background of the disaster that claimed the lives of 25 thousand people.

In recent years, Azerbaijan has begun to bring up the issue of the airplane crash in an attempt to further tarnish the image of Armenia. If previously, Azerbaijan considered the circumstances surrounding the plane crash as mysterious, today it is leveling direct accusations against Armenia, saying that the pilots were allegedly given wrong coordinates deliberately, resulting in the plane crash in the mountains.  The real cause of the crash, according to the black box and the conclusion was that it was human error by the crew. The ensuing investigation also revealed that the flight crew did not have enough rest during the days preceding the flight, and made several consecutive flights the days prior.

In fact, weather conditions in December 1988 were very unfavorable. At the time, there was another air tragedy involving a plane from Yugoslavia bringing aid for the victims of the earthquake. It crashed in the valley between the towns of Etchmiadzin and Armavir. There are also claims that the leader of the Soviet Union Mikhail Gorbachev  miraculously survived a near crash of his plane. Gorbachev had terminated his official visit to New York to visit the disaster zone, Gyumri.

Azerbaijan says that flight IL-76M was an Azerbaijani plane which rushed to the aid of the earthquake victims, and the “treacherous” Armenians shot it down. The truth is, the aircraft belonged to the Ministry of Defence of the Soviet Union, the military air force located on Lithuanian territory.  The nine pilots of the airplane were all Russians (here are their last names – Brilyov, Sokolov, Razumni, Plashkin, Ivlev, Sherkov, Ribalchenko, Avilov, Altukhov). The Azerbaijani side repeatedly states that the aircraft passengers were Azerbaijanis, which is only partly true. In fact, the passengers were  multinational – 50 Azerbaijani, 13 Lezgin, 11 Russians, two Tatars, one Armenian and one Jew. All of them were reserve officers of the USSR Armed Forces, who were coming to carry out rescue operations in Gyumri. The sole survivor, Azerbaijani Fahraddin Balaev died 22 years after the disaster, in 2010. The Azerbaijanis claim that Balaev was left in Gyumri without medical care. The truth is, he was taken to Moscow from Gyumri on a military helicopter, received treatment and returned to Azerbaijan.

The December 7 earthquake shook the whole world. Armenia received aid not only from abroad, including the Diaspora, but also from former Soviet republics, including Azerbaijan. It is true that the Karabakh problem had already drawn a line between Armenians and Azerbaijanis, the Sumgait massacre had already taken place, but Armenia and Azerbaijan were and still would be a part of the USSR until 1991.  During those days of disaster, Armenia hosted the USSR government, which included Azerbaijani leader Abdurahman Vezirov. It is also true that the Azerbaijani government sent their condolences to the Armenian people and government.  Moreover, the government of Soviet Armenia awarded the Azerbaijani rescuers (the group was led by Emil Akhundov) who were working in the village of Gharibjanyan near Gyumri and primarily assisting the villages from the Amasya region, with a certificate of gratitude. The population of the Amasya region was more than 70% Azerbaijani.

In fact, Azerbaijani aid to the victims of the Gyumri earthquake was very limited for two main reasons: First, as I mentioned, the Armenian-Azerbaijani conflict was already under way, and during the days following the earthquake, the train carriages arriving in Yerevan from Baku, had messages written on them in big letters congratulating Armenia for the earthquake.

Today, some Azerbaijanis dare to say out loud that they are ashamed of this atrocious act by their countrymen. After the earthquake the trains carrying aid to the earthquake victims from various cities of the USSR were looted while passing through Azerbaijani territory. In the Soviet era, 85% of Armenia’s trade was through Makhachkala (Dagestan)-Baku-Nakhichevan-Yerevan railway.

The second reason was that Armenia, as a country in mourning, did not want to receive aid from a republic where the Sumgait massacre had taken place a few months earlier.  There were cases when Armenians sent back Azerbaijani aid right from the border, and Armenia’s Prime Minister at the time Fadei Sargsyan wrote about this in his book entitled “The Lessons of Life”.

The first plane from Azerbaijan to help the victims of the earthquake landed at the Gyumri airport in the morning of December 9. Today, Azerbaijani propaganda, distorting the truth, is spreading false information, claiming that the plane was allegedly held up at the airport for 11 hours, and the Armenians did not even give water to the rescuers. Azerbaijani CBC Television’s film says that “Vagif Akhundov rescued a Russian child and a whole Armenian family, a mother and two children, but the Armenians struck him in his back with some kind of an instrument,” because he was an Azerbaijani.

Immoral falsifications don’t end with this. The film claims that French rescuers allegedly discovered bodies of murdered Azerbaijani children there, who were brutally killed by Armenians before December 7.

Today, the Azerbaijani side has again put the 1988 December 11 airplane crash into circulation, in an attempt to counterbalance and to equalize it with the Armenian helicopter that was shot down in November of 2014 near the Karabakh-Azerbaijan line of contact.  In this way, Baku probably hopes to ease the international community’s response, which, albeit indirectly, condemned Azerbaijan’s provocative actions – the shooting down of a helicopter performing a training flight.