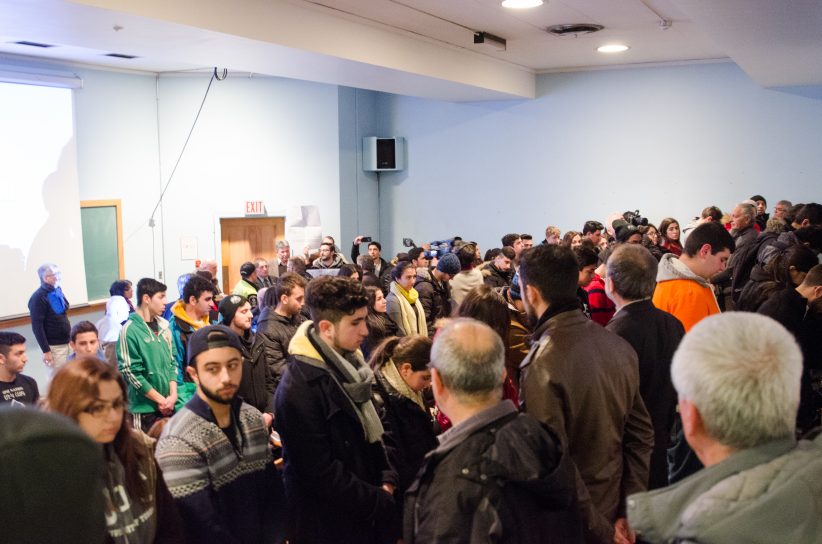 A silent protest was organized by the Armenian Youth Federation of Canada (AYF Canada), in collaboration with the Armenian Students Association of the University of Toronto St. George and Scarborough campuses, and the Armen Karo Student Association on February 27 at a lecture entitled “WWI 100th Anniversary-Human Suffering in Eastern Anatolia.” The lecture, which featured well known genocide deniers Justin McCarthy and Bruce Fein, was held at the University of Toronto, St. George Campus.

Over 70 human rights activists from the university community held a silent protest by standing in unison and turning their backs to the lecturers. According to a press release issued by AYF Canada, the protesters “gave the speakers the benefit of the doubt by listening to their opening remarks,” however when it became clear that their intention was to question the veracity of the Armenian Genocide, the group stood up in unison and silently turned their backs on the lecturers.

CivilNet contacted Armenian Youth Federation of Canada Chairperson Daron Keskinian and asked why these particular scholars were invited, who organized the lecture and what steps the AYF took once they found out about it. Keskinian said, “The Federation of Turkish Canadian Associations (FTCA) organized the lecture and reserved space at the University of Toronto. Given the speakers invited, Bruce Fein a paid Turkish lobbyist and Justin McCarthy, the foremost Western denialist of the Genocide, it was clear from onset that the lecture was being held to spread denial propaganda. With Armenian Genocide centennial initiatives already under way, the FTCA’s hope was presumably to counter commemorative events being held in Canada. The school administration and president were contacted with an official letter signed by several student groups, organizations and academic and genocide scholars from around the world, asking the university to not give a podium to those deniers. 2000+ petitions were collected with the same message from university students and the public at large. The university met with the student leaders and although decided not to cancel the event on the basis of free speech, they decided to move the event to a less prominent lecture hall. Discussions are ongoing with the administration, as the activists continue to demand that the university distance themselves from these deniers.”

Keskinian also explained the reason for turning their backs on the lecturers. “By turning their backs, the human rights activists, who were a majority in the hall, wanted to send a clear message that denial has no place at the university, no place in Canada where the Genocide has been recognized by all levels of government and no place anywhere. Many of the activists who were descendants of survivors could not stand idle while the speakers continued the cycle of genocide through its denial. Turning our backs was a peaceful way of demonstrating our protest to the organizers, the two speakers and the Turkish Government whose representatives were in attendance.”

Lecture organizers briefly stopped the event, but after campus police made it clear that the form of protest did not interfere with the event, they were asked to continue.

Keskinian said that their initiative left the scholars speechless. “They then attempted to continue their talk until they were stopped by the organizers. Some of the the non activist members of the crowd were left in shock while others broke into a sarcastic clap. This was then followed by hate speech and fear mongering by the crowd aimed towards the activists.”

Protestors continued standing with their backs to the podium as Fein spoke, then marched out in an organized walk-out, leaving the remaining twenty or so attendees to listen to the remainder of the lecture.

According to AYF Canada, Justin McCarthy, who was previously turned away from the University of Melbourne and Art Gallery of New South Wales in 2013, has long been regarded as a mouthpiece of the Turkish government to spread their denial of the Armenian Genocide.  Bruce Fein is employed by the Turkish Coalition of America (TCA) as a resident scholar, “to similarly support and propagate Turkish denial policy of the Armenian Genocide and has penned several articles attacking the legitimacy of the historical truth.”

In a statement released by the Armenian Students Association of the University of Toronto, the organization made clear that this should be disconcerting to the University community at large.

“In the interest to maintain its integrity and making amends for this event taking place on campus, the University of Toronto’s President’s Office should release a statement indicating that they distance themselves from this event. The Armenian Genocide is taught at this institution and the University of Toronto should not provide podiums to those who are looking to legitimize their denial of the first genocide of the twentieth century,” the statement read.

In 2004, the Canadian Parliament passed a resolution acknowledging the Armenian Genocide and condemning these crimes as crimes against humanity.

The Armenian Youth Federation of Canada says it condemns the fact that such malicious and hateful speech was allowed to take place in Canada’s largest institution of higher-learning and demands that the University of Toronto speaks out against all forms of genocide denial.