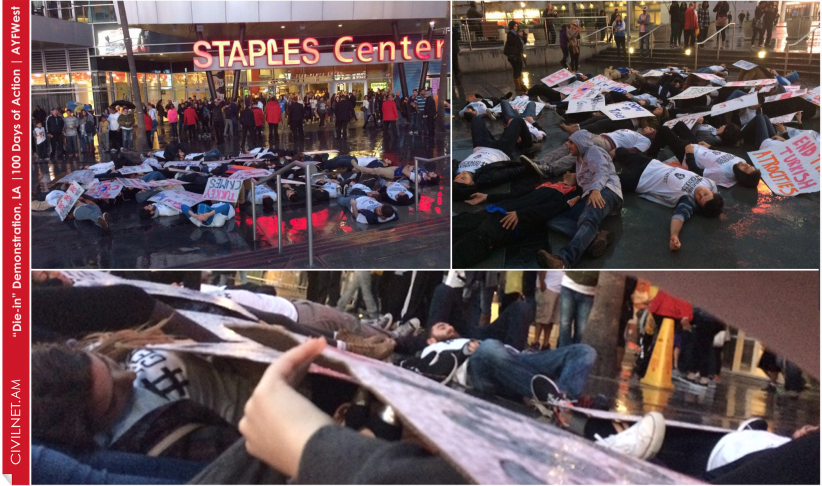 A “die-in” demonstration by over 60 members of the Armenian Youth Federation – Western United States took place on March 1 in front of the Staples Center in downtown Los Angeles.

According to a press release issued by the AYF, the demonstration was organized in a continuing effort to raise awareness of the Armenian Genocide. This event was part of the AYF’s 100 Days of Action campaign leading to the centennial of the Genocide.

Raffi Senekeremian, a member of the AYF’s Central Executive Body said, “We’re here today to show the resilience of the Armenian youth 100 years after the Ottoman Empire tried to wipe out our entire race.The Armenian Genocide, being the first genocide of the 20th century, is not as widely-known as it should be, so we’re here trying to raise awareness on the issue in an active part of our city.”

As thousands of people left the Staples Center, members of the AYF, wearing t-shirts displaying the hashtag #ArmenianGenocide, simultaneously collapsed to the ground in the sudden-death act. Several spectators joined the demonstrators on the ground.

Following the silent demonstration, the demonstrators marched through the streets of L.A. chanting slogans and distributed multilingual pamphlets about the Armenian Genocide.

“The foundations of the Armenian Genocide were set on the ideas of racism and discrimination, but it has yet to be recognized by its perpetrators to this day,” said Verginie Touloumian, a member of the Central Executive. “The AYF calls on the global community to shed light on all crimes against humanity that have derived from an endless cycle of discrimination.”

The 100 Days of Action, which began on January 14, includes daily actions such as weekly social media campaigns, boycotts and divestment, political lobbying, tactical demonstrations, cultural displays, and educational forums. The campaign will culminate on April 24 with the March for Justice from Little Armenia to the Turkish Consulate in Los Angeles.

Founded in 1933, the Armenian Youth Federation is the largest and most influential Armenian American youth organization in the world, working to advance the social, political, educational and cultural awareness of Armenian youth.

Protesting Genocide Denial at the University of Toronto