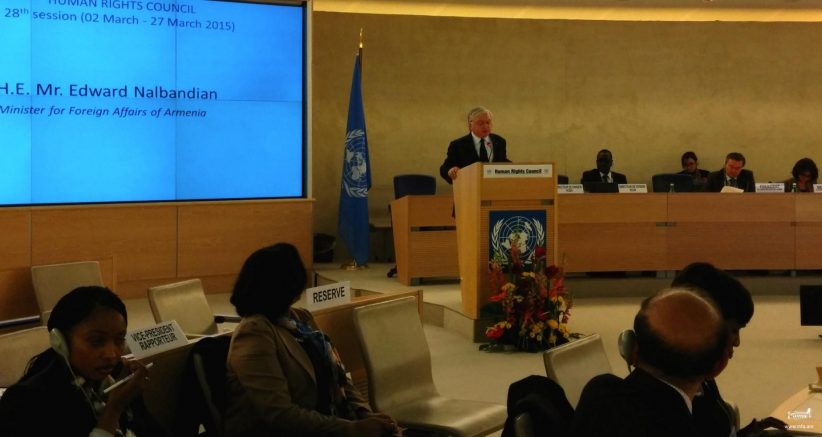 Armenia’s Foreign Minister Edward Nalbandyan took part in the 28th session of the UN Human Rights Council in Geneva. During his address, Nalbandyan said that his participation as Foreign Minister of Armenia was of particular significance at the Council, taking into consideration that this year is the centenary of the Armenian Genocide of 1915.

Foreign Minister Nalbandyan said that Armenia has initiated a resolution on genocide prevention and that there was a growing consensus in the world that “ genocide prevention always requires the constant attention and best efforts of the civilized world without subordinating that noble cause to geopolitical calculations.”

Below is the full text of his address:

In recent years, the Human Rights Council has expanded the thematic scope of its work to respond to gross violations of human rights in various parts of the world drawing attention to the issues of protection of the most vulnerable groups. The protection of religious and ethnic minorities requires the urgent attention and actions of international community, due to massive human rights violations perpetrated by the terrorist groups.

Less than a week ago we all saw the chilling video footage of how the ISIS militants were smashing 2.700 year old statues in the Mosul museum. This crime against civilization is an appalling reminder of earlier similar barbaric acts of destruction of Bamian Buddha statues, Mausoleums of Timbuktu and thousands of Medieval Armenian cross-stones in Nakhijevan. Barbarism has declared war against the civilized world.

Intolerance towards the values of civilization belonging to others, damaging or destroying cultural or religious heritage must be resolutely denounced by the international community.

Armenia has unequivocally condemned the atrocities and violence committed by ISIS, Al Nusra, other terrorist groups and called on the international community to take firm actions against this new scourge, preventing the terrorists to profit from the flow of foreign fighters and financial assets, and to initiate cross-border attacks, using the territories of neighboring states. In this regard, Armenia strongly supports the full implementation of the appropriate UN Security Council resolutions.

The destruction by those terrorists, of the Saint Martyrs Armenian Church in Syrian town of Deir el-Zor, which was a sanctuary for the remains of many victims of the Armenian Genocide is a sad, yet symbolic link between past and present crimes against humanity.

Indeed, the very concept of “crimes against humanity” entered the international legal system on May 24th, 1915 in a special declaration by the Allied Powers – Russia, France and Great Britain, who warned the perpetrators of the atrocities against the Armenian people.

The protection of human rights is by nature a permanent and ongoing process. On January 22nd of this year Armenia presented its second UPR report to the Human Rights Council. Since Armenia’s first review cycle the National Strategy on Human Rights Protection and various National Action Plans were adopted. There have been significant positive developments regarding Armenia’s compliance with human rights instruments. According to international reports, Armenia has real achievements, inter alia, in democratic reforms, good governance, human rights records, freedom of expression, free media and internet, freedom of assembly.

The Human Rights Council has been playing a crucial role in mainstreaming the obligations of states emanating from the Genocide Convention into systematic protection of human rights and adoption of the resolutions on the genocide prevention.

This year Armenia has again initiated a resolution on the genocide prevention. There is a growing consensus of the international community that the genocide prevention always requires the constant attention and best efforts of the civilized world without subordinating that noble cause to geopolitical calculations.

All members of the international community should stand together in their efforts to prevent the crime of genocide and we call upon all member states to support this resolution, in the same way, as it was done two years ago.

Today I recall the words of Andrei Sakharov on the uniting power of Human Rights: “I am convinced that the idea of human rights protection is sole ground that can unite people regardless of their nationality, political convictions, religion or their position in the society…”

Indeed this is an important message and a benchmark for future actions aimed at creating a world without war, dividing lines and racist ideology, a world with firm belief that human rights can and should bring people together and this is the ultimate raison d’être of the Human Rights Council.