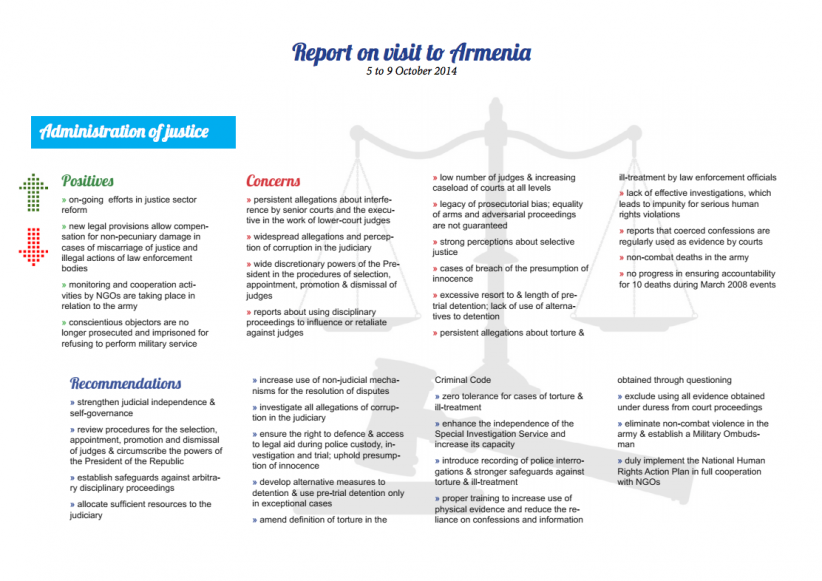 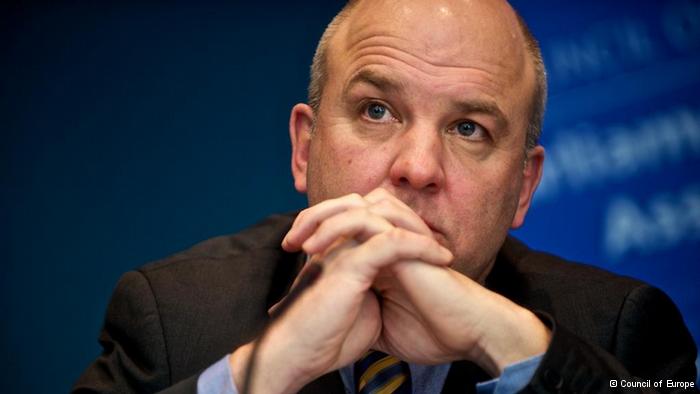 Following his visit to Armenia in October, 2014, where he held discussions on the administration of justice and the protection of human rights in the justice system as well as issues pertaining to the rights of women and gender equality, the Council of Europe Commissioner for Human Rights, Nils Muiznieks, published a report on March 10.

Below is the press release issued by the Council of Europe regarding Commissioner Muiznieks report:

The adoption of gender-related action plans and the 2013 Law on Equal Rights and Equal Opportunities for Women and Men are steps in the right direction, but extensive gender bias still hampers the effective empowerment and equal treatment of women. As a matter of priority, the Commissioner recommends eliminating all vestiges of gender bias in school curricula, the adoption of a comprehensive anti-discrimination law, an increase in women’s representation in public and political life, as well as more resolute measures to promote gender equality, including in the labour market.

The existence of violence against women, including domestic violence, is increasingly acknowledged in the public debate in Armenia. However, the authorities have yet to adopt measures commensurate to the extent of the problem. “Thousands of women are victims of violence every year in Armenia. The phenomenon remains largely unreported because of a poor response from State institutions and a cultural, societal and family environment which tends to justify and accept violence against women. It is crucial that the messages by political and community leaders are unequivocal in this regard: violence against women can never be acceptable. At the same time, judicial authorities and law enforcement officers should be trained to better identify, investigate and prosecute cases of violence against women, with adequate punishment for the perpetrators. These measures should be supplemented by sustained efforts to raise public awareness on domestic violence and gender equality, including in schools, and the adoption of specific legislation on violence against women, providing sufficient safeguards and protection to victims. The ratification of the Council of Europe Convention on Preventing and Combating Violence against Women and Domestic Violence would also be an important step.”

The on-going justice sector reforms should be used to achieve the long-standing aim of ensuring an independent, impartial and effective judiciary in Armenia. “Judges should be better shielded from internal and external pressure and it is necessary to reinforce self-governance and to circumscribe the role of the President of the Republic in selecting, appointing, promoting and dismissing judges. Necessary safeguards should also be adopted to prevent the arbitrary use of disciplinary proceedings against judges.”

Noting the still-dominant position of the prosecutorial authorities in the criminal justice system, the Commissioner underscores the importance of ensuring defence rights, in particular by upholding the principles of equality of arms, adversarial proceedings and the presumption of innocence, as well as reinforcing access to legal aid. The Commissioner also notes with concern the frequent resort to pre-trial detention as a preventive measure and stresses that remand in custody should be used only in exceptional circumstances, giving priority to non-custodial measures.

The persistent reports of ill-treatment by law enforcement officials as well as the lack of effective investigation into serious human rights abuses are of deep concern to the Commissioner. “It is high time that the Armenian authorities address these issues in line with their human rights obligations. Strengthening safeguards against torture and ill-treatment, excluding all evidence obtained under duress and pursuing more vigorously policies and practices to ensure accountability for serious human rights abuses, including those committed during the March 2008 events, are among the most urgent measures to be taken.”

Lastly, the Commissioner recommends addressing the problem of non-combat violence in the army by ensuring accountability and strengthening measures to prevent violence, also in cooperation with NGOs and victims’ relatives.

The Ghost City of Ani