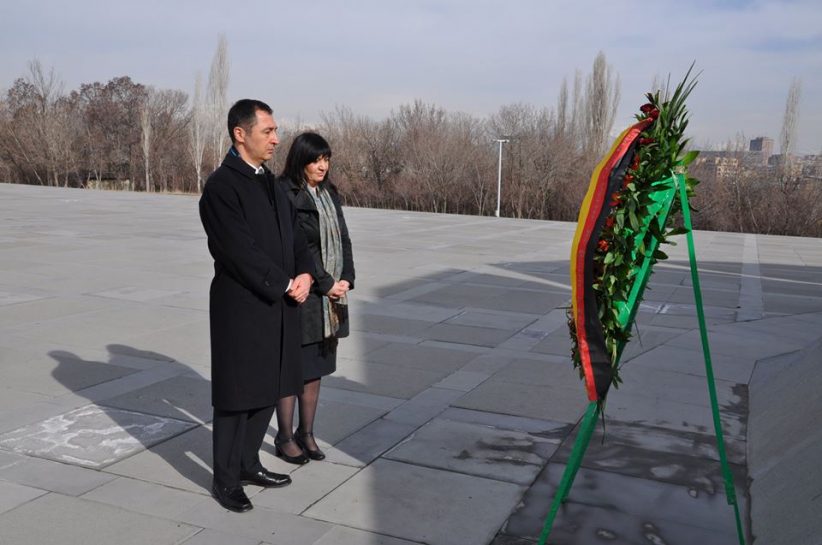 Cem Ozdemir, co-chairman of the German Alliance ’90/The Greens Party spoke to CivilNet’s Alin Ozinian about Turkey-Armenia relations, the 100th Anniversary of the Armenian Genocide, the role of Germany in 1915 and Europe-Turkey relations. Watch the interview here.

Mr Cem Ozdemir, thank you very much for your time and for taking part in our program. You are visiting Yerevan with a delegation. Could you please tell us the reason of your visit and how did it go?

I am here with my colleague from the Federal parliament of Germany Ekin Deligöz. The reason why I am here is the 100th year of the Armenian Genocide. As you know, Germany was on the same side as the Ottoman Empire at that time and we somehow became an accomplice. Therefore, we also have obligations in this regard, to commemorate and pass the memory to the next generations. We came here to bring this message and, of course, because the future of Armenia interests us. We would like to see Armenia as close to Europe as possible. We want to see a more democratic Armenia. As a person who has roots in Turkey, it is sad for us to see that the Turkey-Armenia border is closed. It is working against both sides. That is why we are trying to give this message both here and in Ankara.

Mr Ozdemir, you said that you would like to see Armenia closer to Europe. Do you think it is possible for Armenia to get closer with Europe without Turkey becoming closer to Europe first? At least geographically, just by looking at the map.

That is why we are always bringing up the issue of the opening of the borders. It is not reasonable to seal these borders. Even if we look at the issue in the Karabakh context, the opening of the border would have a positive impact on every issue. Everyone would win. The Turkish economy would benefit, Turkey-Armenia relations would improve, Turkey’s coming to terms with its history would become easier, Armenia-Azerbaijan relations would become more healthy. Maybe only Putin might be unpleased with it, but everyone else would be happier. I also think that Turkey must not be very content with having Russian soldiers on its borders with Armenia. In this context, sadly, there has been many missed opportunities. I find it a little bit similar to Palestine-Israel relations. There has been some meetings, presidents came and went. But in the end they couldn’t agree on the final small details. Turkey-Armenia relations is very similar to it. Progress is becoming harder after each missed opportunity. Turkey’s closure of the border with Armenia didn’t bring any rewards. If they wanted to help Azerbaijan, then this policy has been going for 20 years and didn’t bring any solution. Maybe they have to do something else. Maybe they have to open the border.

Under these conditions, when the Armenian Genocide is not recognized and there are no diplomatic relations between both countries, do you support establishing relations without preconditions? As you know, there has been this football diplomacy for the last seven years and recently Armenia stepped back from the protocols. How do you see this process? Will there be any results out of it or shall we expect a completely new process?

We should never lose hope. We have met with Mr. President. He has taken very progressive steps. The genocide recognition issue will come up on the agenda sooner or later, apart from the border issue. The opening of the border would help people to recognize each other, it will contribute to the deepening of economic relations, would ease scholar exchanges. It is very important for Kars too. Therefore, I am 100 percent sure that all these would help Turkey to come to terms with its history. However, as soon as they open the border, Turkey must also put on the table what happened to the Armenians and the Assyrians, what happened to the Greeks during the September 6-7 pogroms. All these should be taught in books and be talked about. It is already being discussed among civil society groups. It is also time for politicians to stop closing their ears and face it. I am the parliamentarian of a country which faced its past, even if it was late or incomplete, but I am the parliamentarian of a country which is facing it and Germany is not getting weaker by doing so. On the contrary, one of the reasons why Germany is one of the strongest countries in the world is that it faces its past, it doesn’t hide the dark pages of its history. “We did this and it was wrong. Germany has lost a lot. We have lost our best citizens, our most hard working people, the Jews.” The same applies for Turkey. I went to the Genocide museum and read the names and professions of the people we have lost. They were the most forward looking and brightest intellectuals of Istanbul and they were killed. Starting with Komitas, to architects, intellectuals, journalists, writers… The Ottoman Empire exterminated the most progressive citizens in its history. The Ottoman Empire lost immensely. I think one of the reasons why Turkey isn’t among the most developed countries today is because the Young Turks were not heros, but traitors. They harmed Armenians, Assyrians and Turks as well. As you know, what they did in Sarikamish caused significant harm to the Ottoman Empire. They are definitely not heros, they are traitors.

Mr. Ozdemir, you spoke about the Young Turks. As you know, there is still a committee in Turkey called “The Talaat Pasha Committee” headed by Dogu Perincek and there is a court case at the European Court for Human Rights against them. We saw the Turkish Government standing by Dogu Perincek. It seems like when it comes to Armenians and the Armenian Genocide, all political powers in Turkey become one fist and make one decision, have one opinion. How was this perceived in Europe? How did they look at idolizing Talaat Pasha? How did this affect Turkey’s image in Europe?

I think everyone should be ashamed of this. For people who are originally from Turkey, or citizens of Turkey, this is very shameful. There is no good or bad fascism. It is necessary to fight against fascism. The end of fascism is always death. In any kind of fascism you first oppress and harm your own people. I don’t think that those who support this fascism love Turkey.

I think it would be more like friendly advice rather than pressure. For a long time after the second world war, Germany also tried to get back to normal, it wanted to forget what happened, but you cannot forget such things. No matter how much you clean it, blood leaves a stain. Therefore, you cannot find your path to the future without coming to terms with your own history. You cannot make correct decisions. First, you cannot understand Ottoman history without knowing what happened to the Armenians. When you say this didn’t happen, the following question arises: What happened to this people? How did they disappear? One of the best examples of this is how they are hiding the fact that one of the reformers of the modern Turkish language is an Armenian, Hagop Dilachar.

They were hiding his Armenian surname.

We can say that Turkey witnessed some progress in the process of EU accession. As a European politician, how do you see the situation in Turkey today? You talked about the history books. Are these books changing? In what way should they be changed? What kind of changes could be made, apart from politics, among the people? What kind of steps should be made to change the general perception and public opinion? Would the EU continue this struggle for Turkey by demanding a more democratic country?

I would like to give our example. There has been three wars fought between France and Germany in the last 100 years. Generations of French people were raised knowing that Germans are their eternal enemies and vice versa. The border is open. You no longer feel that there is a border. You couldn’t pass the border when we were children. There were also visa problems. Now there is no such thing. Furthermore, look at the example of Poland. After the cold war they have published common history textbooks. They have learned how to look at history through our eyes, and we have learned to look at history through their eyes. We understand each other better now. I wish Turkey-Armenia-Azerbaijan relations could become like this too. Looking from afar, I don’t think these problems cannot be solved. There should be some good will and broadmindedness. If there were railways among these countries, with open borders and decent economic relations, it would become a peaceful region. Can you imagine if the money spent for militarization were put into the health care system, education, fighting poverty, mass transportation – and as a Greens politician – I’d say new energy sources, it would become a completely different world and everyone would become very happy. The basic mission of politicians is working for the happiness of the people, not to cause them misery.

Arsinée Khanjian: Our History is an Illustration of Many Other Injustices that Continue to Happen